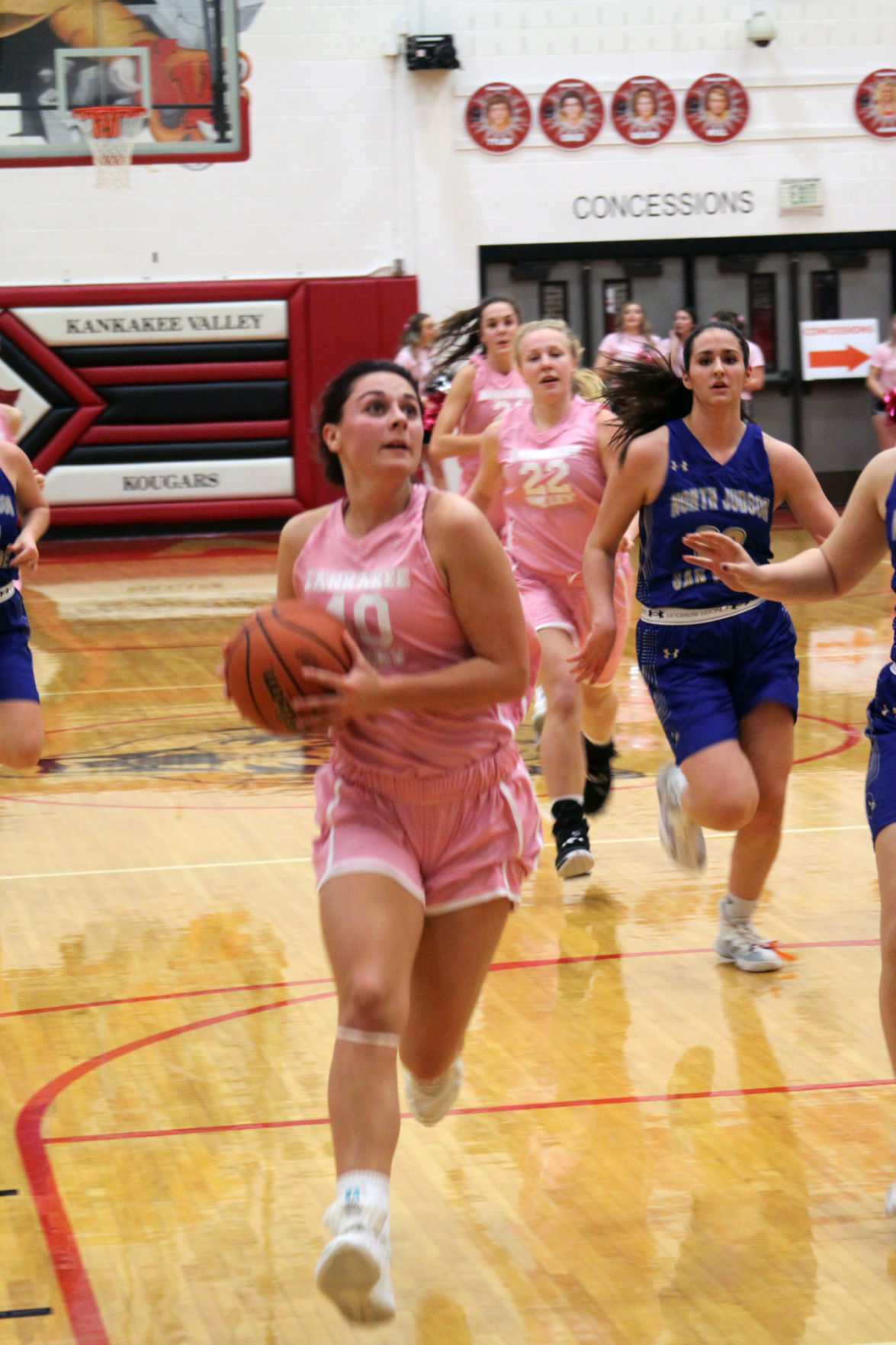 KV senior Courtney Sizemore has her eyes on the prizes as she heads for the basket in a breakaway against North Hudson. 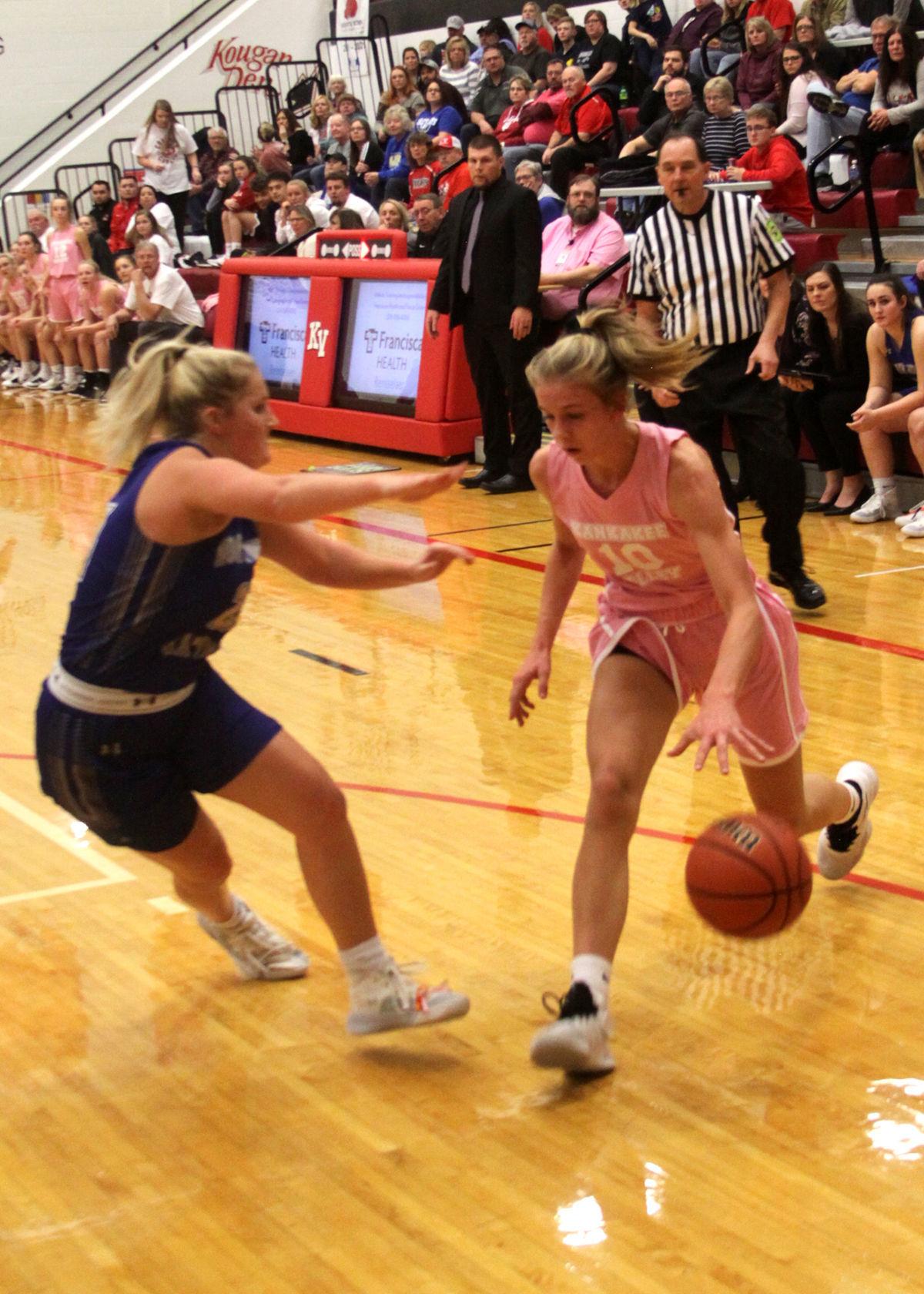 KV senior Courtney Sizemore has her eyes on the prizes as she heads for the basket in a breakaway against North Hudson.

WHEATFIELD — If you, like several others, left the game early on Thursday, Jan. 9, you might be surprised to hear that the Kankakee Valley Girls Basketball team had lost. After all, at the end of the third quarter, the Lady Kougars were up 35 – 19 and seemed to have the game well in hand against North Judson – San Pierre. Stunningly, the Kats were upset 46 – 44.

Lilly Frasure, the Lady Bluejays junior who averages in excess of twenty points per game, had scored just eight total points through three quarters of play. She definitely found her fire in the fourth as she put up 19 more, including several coast-to-coast plays that left the Lady Kougars gasping.

“We finally found the fight in us,” said Frasure of her team. “We played our hearts out at the end of the game and we played how we know we can play.”

The Kougars had jumped out to an 11 point lead before NJSP hit their first bucket. The applied the pressure that has become a signature for the Valley girls over the last few years and that pressure shut dow Frasure and her teammates.

The Kougars kept that pressure up through the first half and through most of the third quarter but early in the fourth, it became obvious that KV was running out of gas. At the same time, the Bluejays began to apply their own pressure which resulted in turnovers and poor shot choice. The Bluejays, carried on the back of Frasure, began to creep ever steadily closer.

With just 3:09 left in the game, North Judson pulled within five. After yet another KV turnover, Frasure hit a dagger three-pointer and the Bluejays were within two. KV senior Courtney Sizemore drew a foul and nailed both shots to put the Kougars back up by four with 1:47 left in the match but Frasure answered with two of her own. Kougar freshman standout Lilly Toppen put up a basket, again stretching it to a four-point game but Frasure drove the length of the court and was fouled as she shot. She sank both free throws, knocking the KV lead back to just two.

KV inbounded the ball but lost it almost immediately. Junior Adalynn Harper, who hadn’t scored all night, was fouled and sank both free throws to tie the game at 44-all with 56 seconds left.

KV got the ball downcourt this time and Sizemore shot, missed and was rebounded by NJSP. Junior Abby Chambers drew a foul and also sank both to give Judson its first lead of the night. With 27 seconds left, a jump ball was called as KV tried to tie it up, giving the Bluejays the ball with under 10 seconds to play.

The home crowd had one more moment of elation, though. As North Judson threw the ball in-bounds on the Kankakee Valley end of the court, it was stolen by Kougar freshman Kate Thomas who quickly attempted a shot to force overtime. The ball was tipped, however and and KV had to again inbound the ball with seven seconds to play. KV was unable to score, however, giving North Judson — San Pierre a storied comeback win.

NJSP Coach Chris Newbauer was thrilled with the comeback win.

“This shows that we can do it if we need to,” said Newbauer. “We were shooting 14% in the first half but the team never gave up. We just chipped away and starting making the shots we needed to. Those free throws at the end of the game were the difference.”