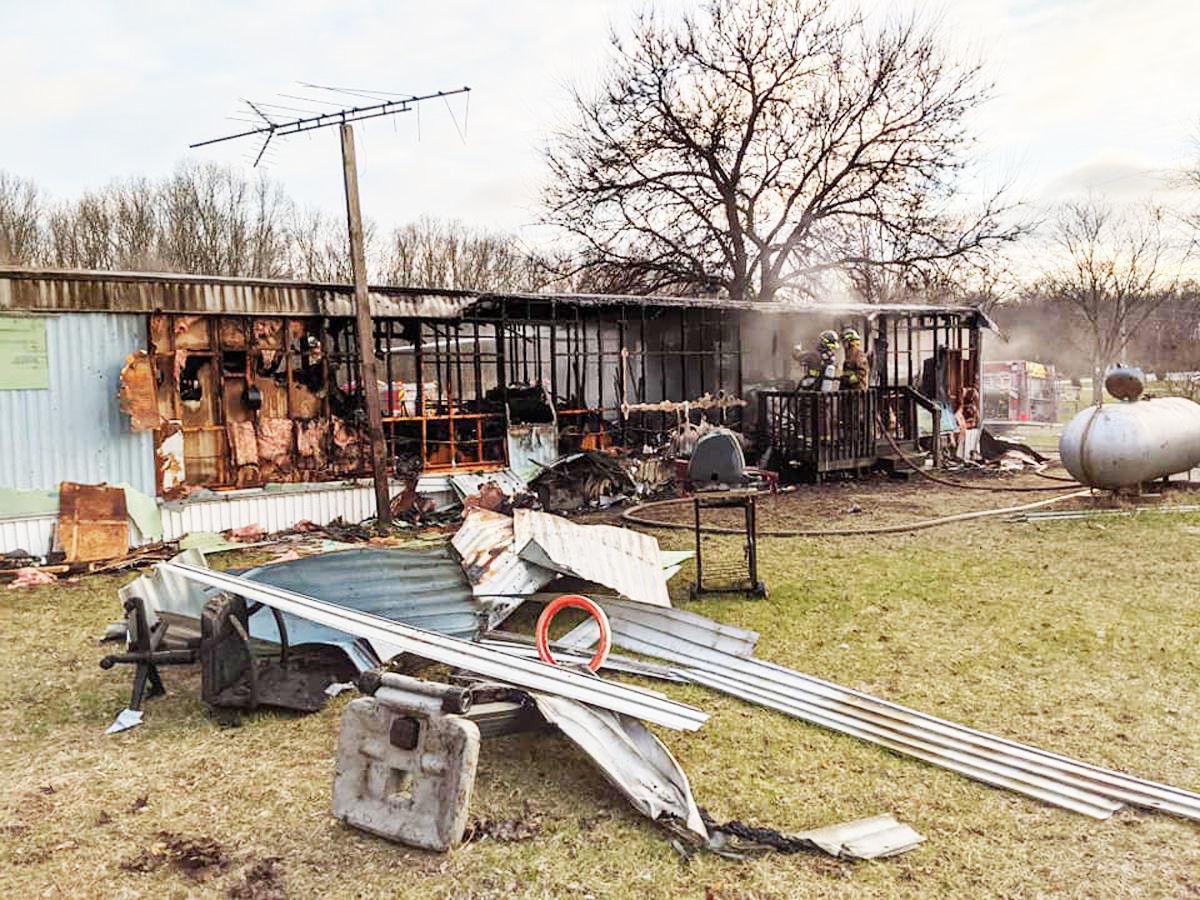 Wheatfield and Keener firefighters work to extinguish the fire that destroyed a mobile home on 1300 North in Wheatfield. The family escaped the fire with nothing but the clothes they wore. Everything else was lost to the flames. 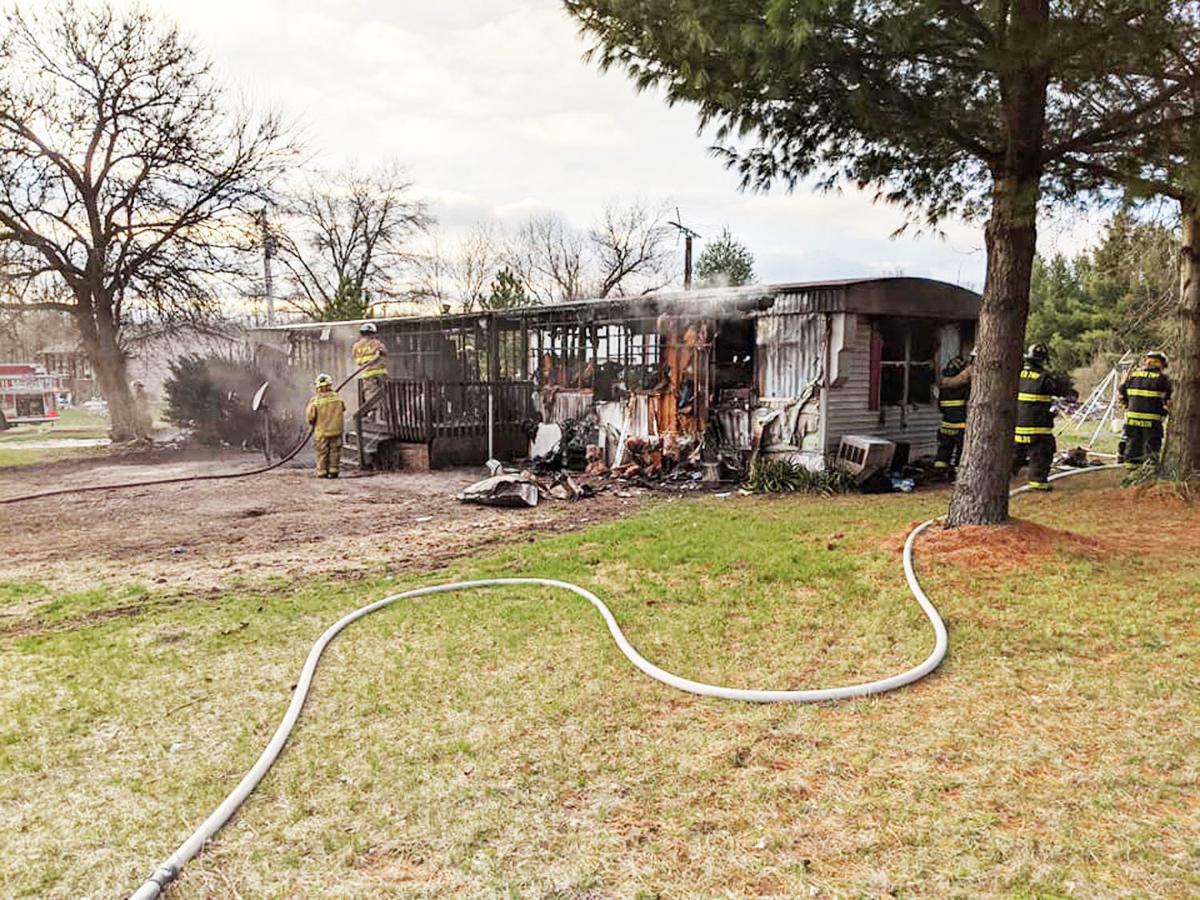 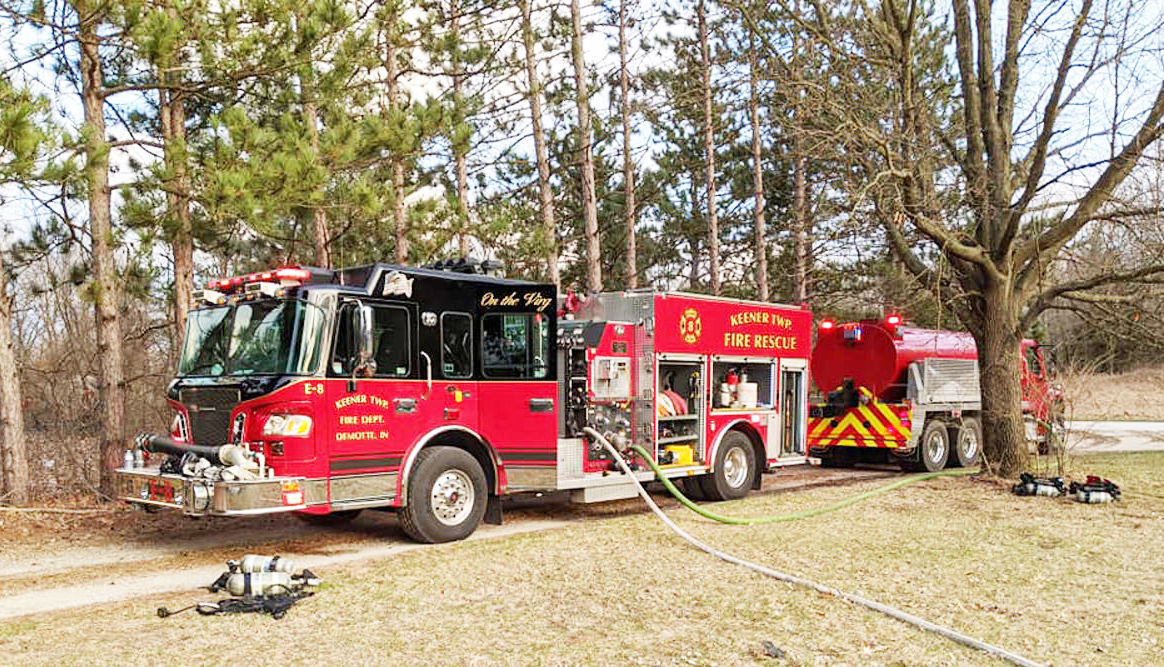 Keener Fire responded with Wheatfield Fire to a fire on 1300 North, east of St. Rd. 49 in Wheatfield Wednesday afternoon.

Wheatfield and Keener firefighters work to extinguish the fire that destroyed a mobile home on 1300 North in Wheatfield. The family escaped the fire with nothing but the clothes they wore. Everything else was lost to the flames.

Keener Fire responded with Wheatfield Fire to a fire on 1300 North, east of St. Rd. 49 in Wheatfield Wednesday afternoon.

WHEATFIELD — A family escaped their home with nothing but the clothes they wore Tuesday afternoon, when the family’s mobile home caught fire. The Wheatfield Fire Department, with assistance from Keener Fire arrived to find the mobile home completely involved in fire. The call came in shortly after 5:30 p.m.

Wheatfield Fire Chief Mark Ratliff said the family, a couple and their 19-year old son were all home at the time, when the son noticed smoke coming from his bedroom. The family left the home quickly, along with their dog, but had no time for personal belongings, including their wallets and cell phones. The home, an older model mobile home, quickly became engulfed.

A cause for the fire has not been determined as of Wednesday. Ratliff said he is working with the state and insurance investigators, but is leaning towards the fire being accidental.

Ratliff said the firefighters were on the scene for about two and a half hours and they had the fire under control within an hour, but stayed to extinguish hot spots. He said they still had tanker trucks on station to bring more water if needed and they were able to get water from Georgia Pacific, which was not too far from the scene and has hydrants available.

He said the Red Cross was contacted to help the family find lodging for the night or longer and the family’s church was notified as well.

Ratliff said they had around 25 firefighters on scene between the two departments and they had the Rensselaer Fire Department on standby at Keener’s station to cover the northern county area if another call came in.

Ratliff said the protocols for fighting fire have not changed with the COVID-19 pandemic, but have changed if they assist at a medical call or accident and the person or persons has symptoms of the virus. Then they have to don protective gear, and once returned to the station, they all have an extra set of clothing to change into after showering there. They are also not answering these types of calls in their own vehicles, as they would normally do to reduce response times. Until the state gives notice otherwise, they will have to go to the station and respond in a fire truck instead.

The Kankakee Valley Post News will add updates regarding assistance for the family as the information becomes available.

**STOP STRUGGLING ON THE STAIRS**