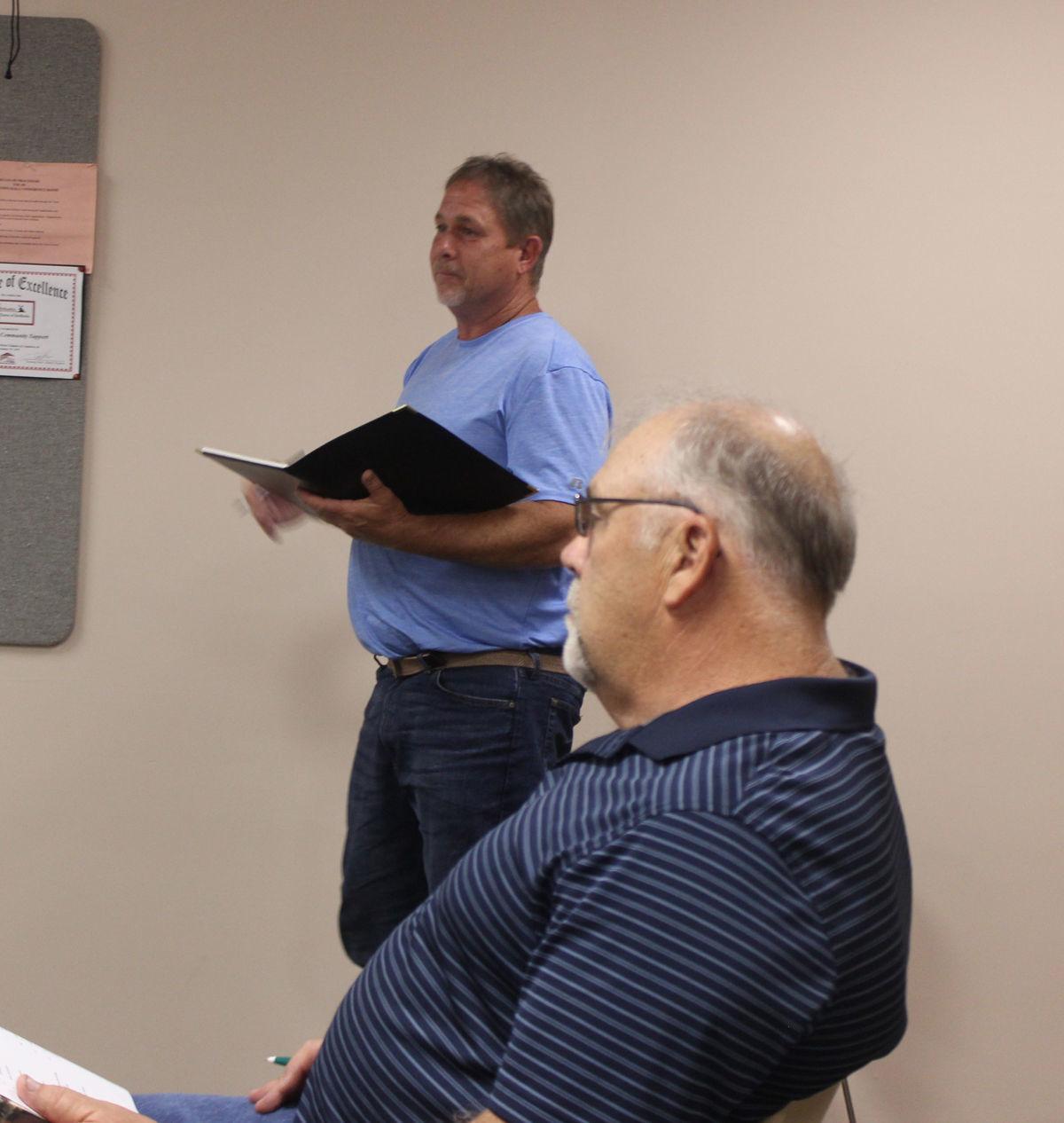 Dave Yurko (standing) gives the water/sewer report to the town council. He was placed as public works director after the unexpected death of Bob Barton. Yurko is a certified operator for both water and sewer and worked with Barton in the public works department. 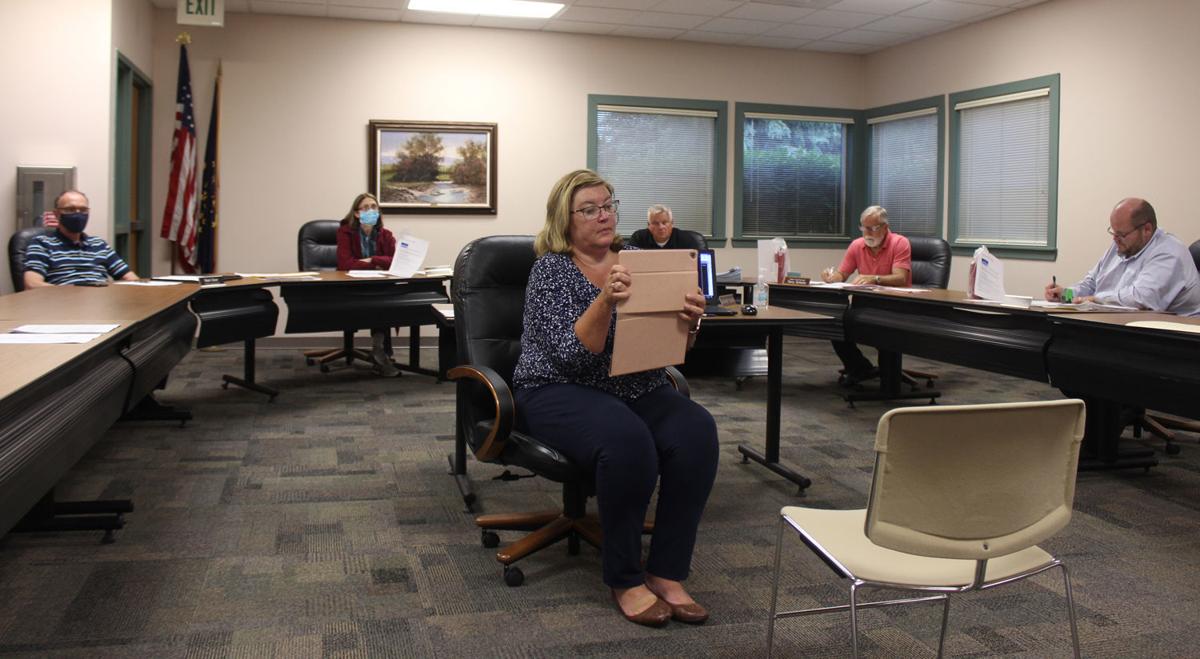 Town Manager Heather Tokarz (seated center) turns the camera on the speakers at the first DeMotte Town Council in-person meeting since February. The meeting was also broadcast live for those unable to attend. Seating was limited due to pandemic guidelines of social distancing.

Dave Yurko (standing) gives the water/sewer report to the town council. He was placed as public works director after the unexpected death of Bob Barton. Yurko is a certified operator for both water and sewer and worked with Barton in the public works department.

Town Manager Heather Tokarz (seated center) turns the camera on the speakers at the first DeMotte Town Council in-person meeting since February. The meeting was also broadcast live for those unable to attend. Seating was limited due to pandemic guidelines of social distancing.

DEMOTTE — The DeMotte Town Council met in person for the first time since the quarantine began in Indiana while also streaming the meeting online for those who could not come in to town hall. Seating is limited with social distancing guidelines in place; however, the full board was able to fit around the conference room.

President Jeff Cambe said it has been almost a month since they lost am employee, “Most of us would call him friend,” he said referring to Bob Barton, public works director who passed unexpectedly last month.

An executive session was called shortly after Barton’s death and his second, Dave Yurko, at the utilities department was chosen as interim director. Yurko is certified for water and sewer. The town had two employees certified in case something unexpected happens and the town could keep on without missing a beat. “Kudos to Dave for stepping up,” Town Manager Heather Tokarz said. “Dave has done an incredible job over the last four weeks.”

The town will be looking for an employee to fill the job opening created by the move.

“Bob will surely be missed,” Tokarz said. The council agreed to pay Barton’s remaining vacation and sick pay posthumously. He worked for the town for 37 years and was a mentor to the employees in his department, she said.

When the national emergency began, municipalities suspended late fees and shut offs for utilities. With the final phase for reopening to begin on July 4, the state’s mandated moratorium for shut offs due to non-payment may be lifted and the town’s employees are ready to set the shut offs in motion if allowed. Tokarz said letters have been sent out to those who are behind in their payments and are asking them to call and set up a payment plan to avoid losing their water.

An ordinance was passed for a raise in trash pick up fees in town. On July 1, the new rate kicks in at $18.26 per month from $17.84 due to the contract with Republic Services.

Police Chief Tom Jarrette said the department is in good shape with PPE, personal protective equipment, but with a second round of COVID-19 cases predicted, he is looking into avenues to stock up so they aren’t caught without it in the future. He said he is looking into cell phones for emergency workers offered through a program that charges $40/month per phone. If cell towers were to go down, these phones would still work. He did not have all the details as yet at the meeting and said he would come back with more information if needed.

Street Supervisor Jeff Powers said the town’s Freightliner truck was having issues with the check engine light coming on, and he found out this is common in these type of trucks if not used constantly. He was told they weren’t running it hard enough, so he will be taking it out for a drive occasionally. He told the board not to worry if they see the truck heading down 231, it was just going for a ride.

His department received a donation of a 30 gallon water tank and pump from Mike King, and they are using it to water the plants at the garden park downtown. Previously, the employees had been hauling buckets of water to the park to water the plants.

While the pool is closed for the summer, repairs and maintenance has been done so it will be ready for next summer. Board member Alaina Bauman said it was a shame the pool couldn’t be opened this year. Camby said it at least gave them a chance to repair the pool the “right way.” The pool manager is planning on some special events for next season to make up for the loss of this season Tokarz said.

With money the town received through the CARES Act, the council approved the purchase of laptops for town employees and tablets to be used if they need to again work from home or as backup if the town’s desktop computers go down. The total for the laptop computers and tablets was $18,756.

Tokarz said she was able to procure no touch soap dispensers for $1 each, which she said was probably an error on the site she found them, but she spent less than $30. No touch hand dryers will cost $716 each plus $57 to install them. They would like three for the pool and two for the concession stand at the Field of Dreams. This would come out of the CARES Act money as well. Krooswyk Plumbing will do the installation work. They are also getting push button shower faucets installed by Krosswyk at the pool. They are metered push button faucets and will cost $6,506.

Clerk/Treasurer Peggy Michelin said they are gearing up for the 2021 budget season. The town received its June tax allotment, and she said she was thankful that so many property owners chose to pay their taxes on time. The due date for property taxes was pushed back to July due to the pandemic.