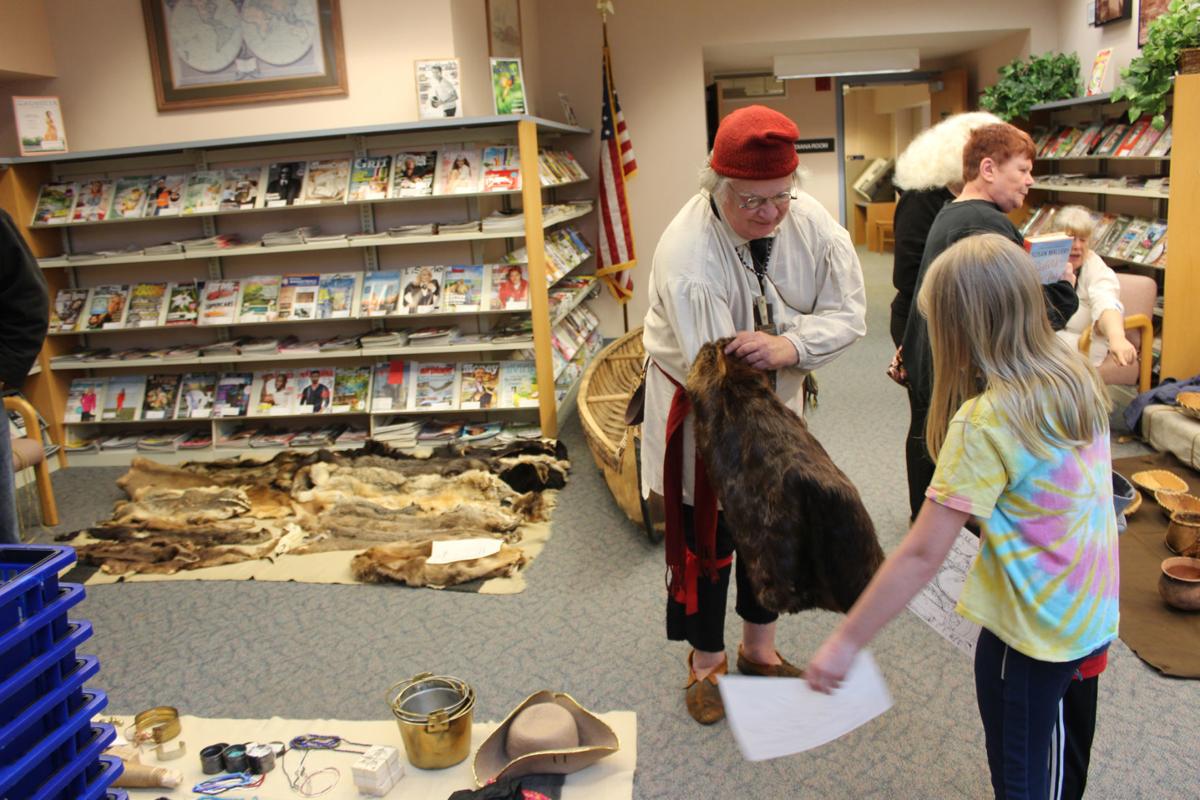 Voyageur Terry Haas explains how a beaver pelt is used as currency in the days of the French voyageurs who traveled the region to trade goods for fur with the Native Americans. 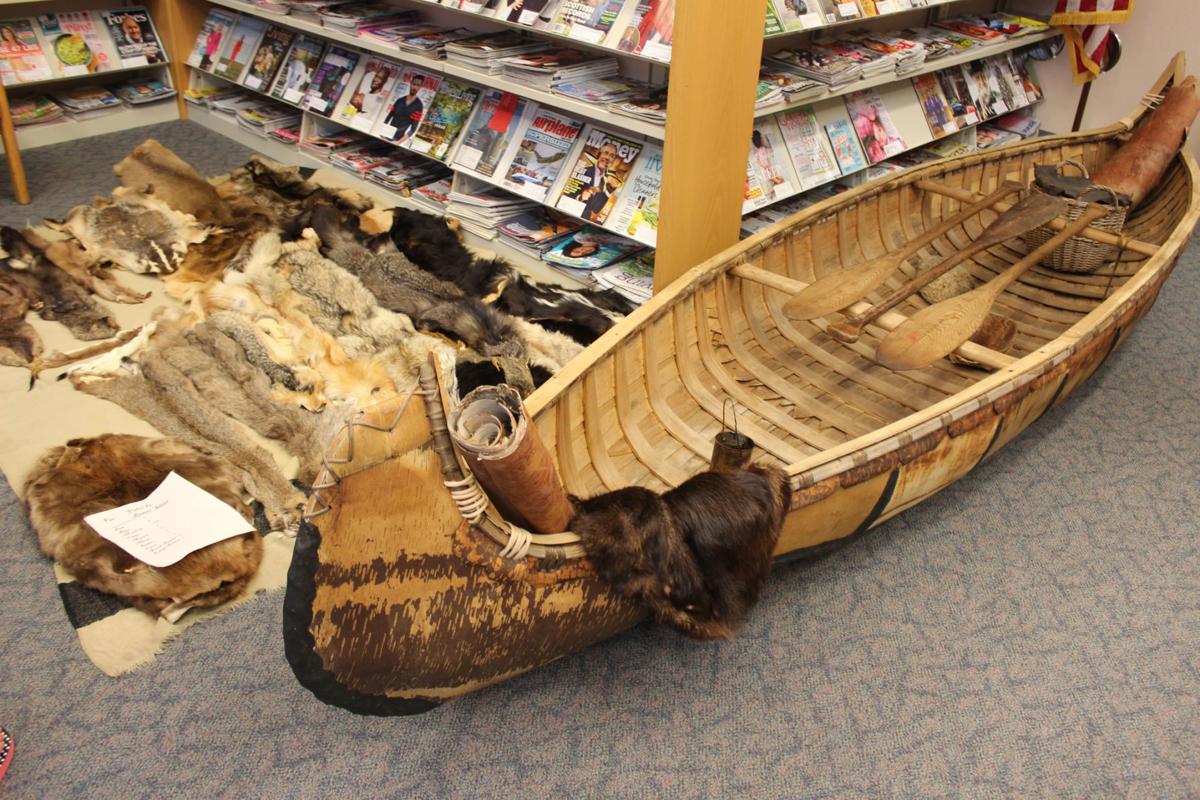 A voyageurs’ canoe is on display at the DeMotte Library Saturday morning. The owners, a couple from Crown Point, actually take trips on rivers in this canoe, just as the voyageurs did over 100 years ago. 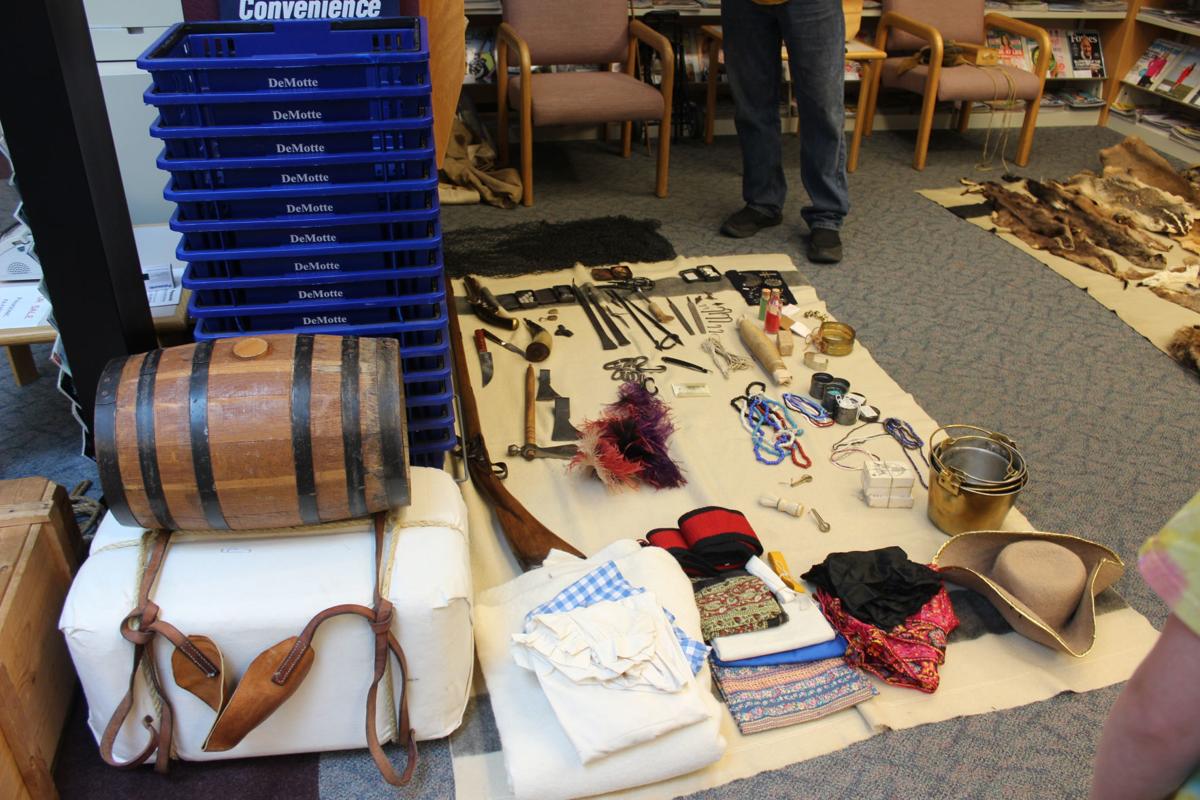 A voyageur's wares often included clothing and other fabrics and textiles, metal cooking pots and useful forged metal items the natives in the region did not have and were willing to trade furs for payment. 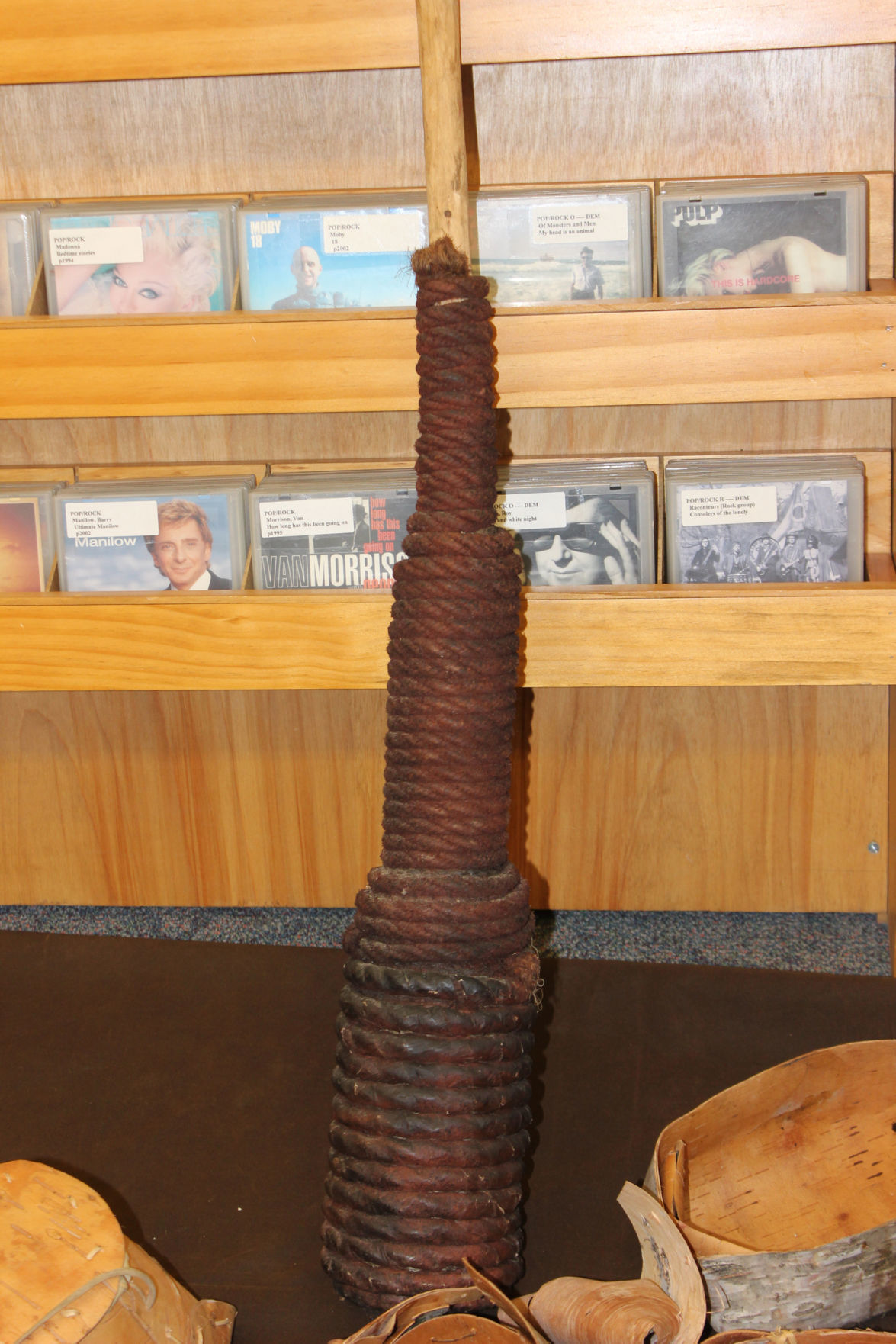 Voyageurs sold tobacco, which had been made into a rope for easy shipping and carrying. 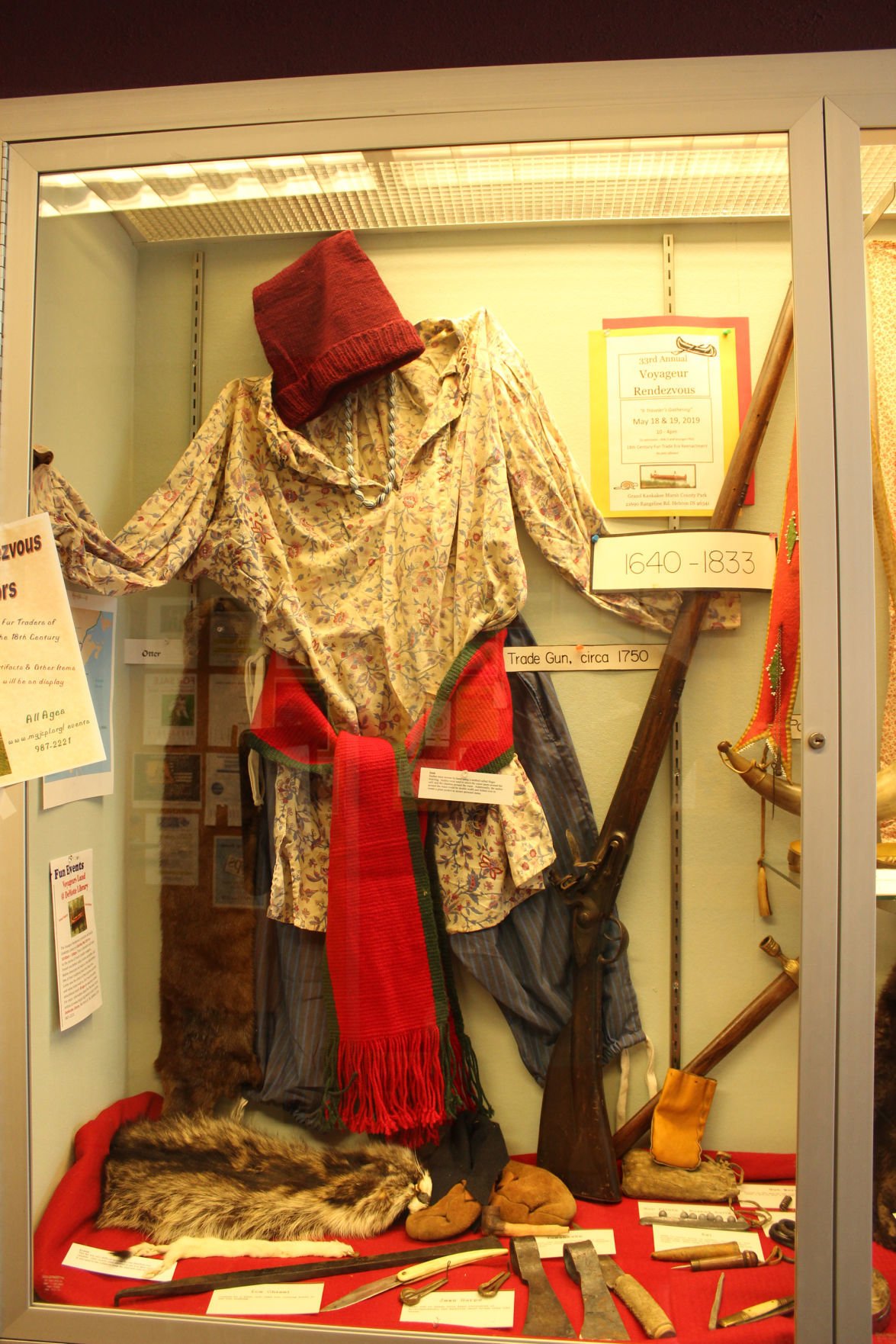 A typical voyageur's outfit is exhibited in the display case at the DeMotte Public Library. 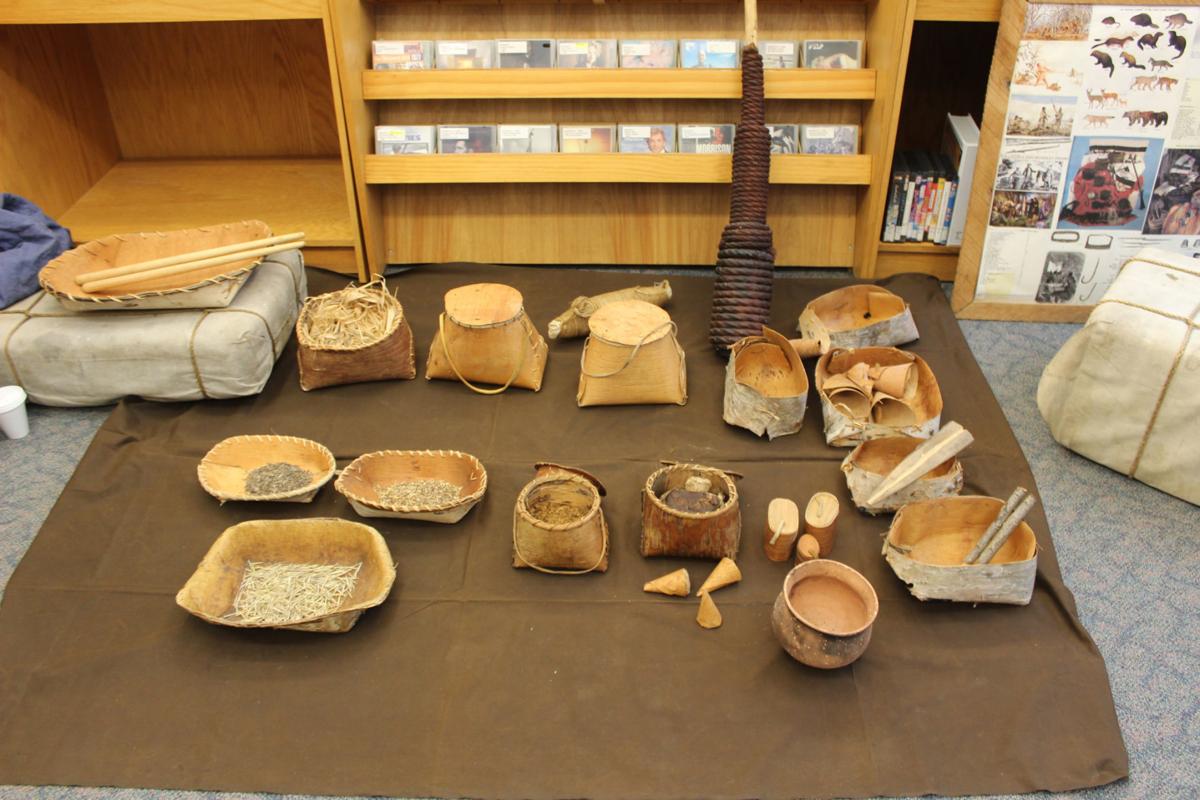 Baskets woven or made from birch bark hold items for voyageurs.

A typical voyageur's outfit is exhibited in the display case at the DeMotte Public Library.

Baskets woven or made from birch bark hold items for voyageurs.

DeMOTTE — Dressed in period clothing, French Voyageurs came to the DeMotte Library to show samples of their wares, and the furs they traded to receive. When few white men and women came to the Great Lakes area, including northwest Indiana, the French voyageurs traded with the local native Americans. Along the Kankakee River, the Potowatami Indians were happy to trade with the travelers, who brought them textiles, beads, metal pots and other useful items in trade for the many furs the Potowatami had available.

Depending on the type of fur, the value was set for each one, so a linen shirt from the voyageurs could be bought for two beaver pelts or four fox pelts. The voyageurs traveled from the French-Canadian region of Ontario across the lakes, following the rivers throughout the midwest to trade for the furs that were especially popular in Europe at the time. Furs made coats, hats, muffs and mittens. The were the first to encounter the native residents of the country, and were successful in negotiating trade agreements with them. They served as guides for settlers, who soon followed after, and explorers eager to find new land for themselves.

At the library, the reenactors were Rick and Dawn Narjes from Crown Point, and Terry Haas from Illinois. The troop, a part of a much larger group of people who enjoy living as they did over 100 years ago. The Narjes have been portraying voyageurs for over 40 years, and their children were brought up learning the old way of life. They have a replica canoe, made of wood and birch bark coating the outer portion. They brought with them a variety of goods, including chunks of maple syrup, tobacco and wild rice and other grains in handmade baskets.

The couple began their life-long adventure when they simply wanted a flint-lock rifle for a wall decor. The seller told them about a group of people who get together and shoot these rifles. When they went to the shooting gatherings, they soon found many of the people also dressed in period clothing, so they too began to do so as well. They took long camping trips in canoes, carrying their gear carefully packed in the canoe. They lived as they did in the late 1800s, early 1900s as they traveled the rivers and lakes of the midwest. They took a grueling 400 mile trip on the Wabash River to the Ohio, and loved every minute of it, and their children did too. “We try to keep it authentic, no coolers,” Dawn Narjes said. “The kids grew up with these things and they enjoyed it.”

Haas brought goods the voyageurs would have traded with the Indians, including rifles and ammo, clothing and textiles, soap and shaving supplies, mirrors and more. He said that although Hollywood would have us believe the natives were mostly interested in guns, but the truth was they were more interested in the textiles and clothing the voyageurs brought with them. The women would have especially wanted the clothing and fabric because it saved them a lot of time and effort sewing clothes out of skins. The fabric was much easier to wash and maintain than the deer skins and other hide they used for clothing at the time. They also wanted the metal cookware, which also lasted longer than their clay pots.

Haas began his life as a voyageur, which means traveler in French, 33 years ago. He happily explained how the travelers lived and traded. He had a variety of furs, including bear, badger and skunk, which he explained were the currency of the day and how each fur was valued differently. Beaver and ermine were very popular with the Europeans. Fox, cougar or lynx and bear were also useful for outer wear.

Haas said they do this because this isn’t taught in history classes and they want today’s children to know what life was like long ago where they live now.

The annual Voyageur Rendezvous is planned for Saturday and Sunday at the Grand Kankakee Marsh just across the river in Lake County. The reenactment begins on Saturday from 10 a.m. to 4 p.m. and continues Sunday with the same hours. They plan to have food, games, shopping and more throughout the day. The scheduled event may change depending on the Kankakee River, which is overflowing the area at this time. Before heading out, check the website, lakecountyparks.com. There is a small entry fee and children 5 and under are free.