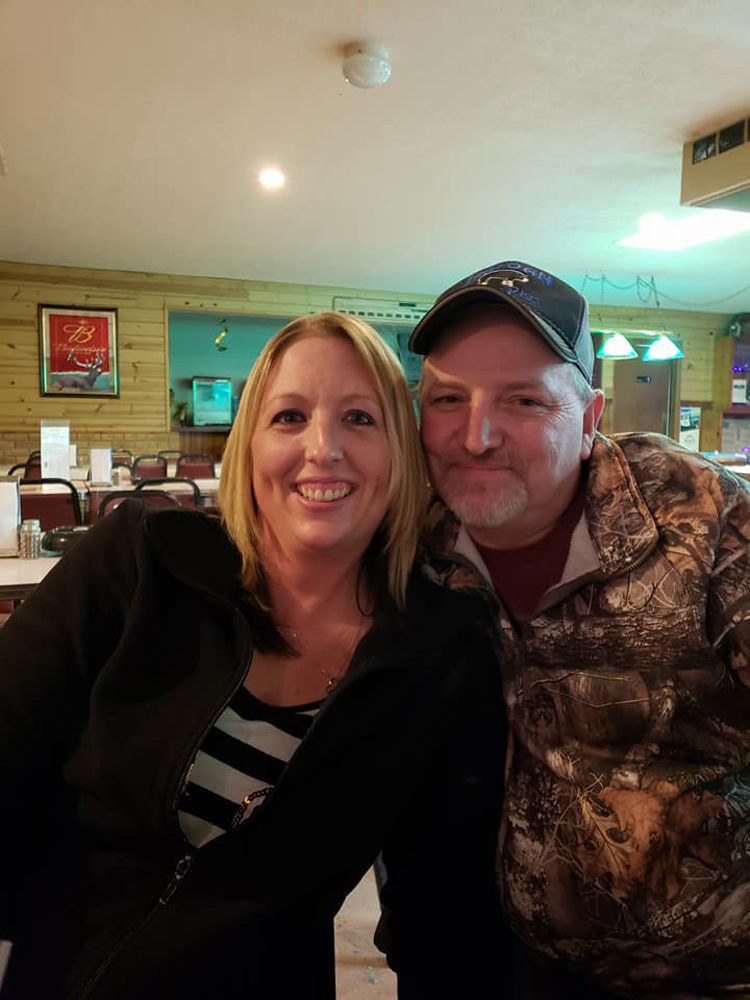 The future Mr. and Mrs. Jordan are planning to wed in September. 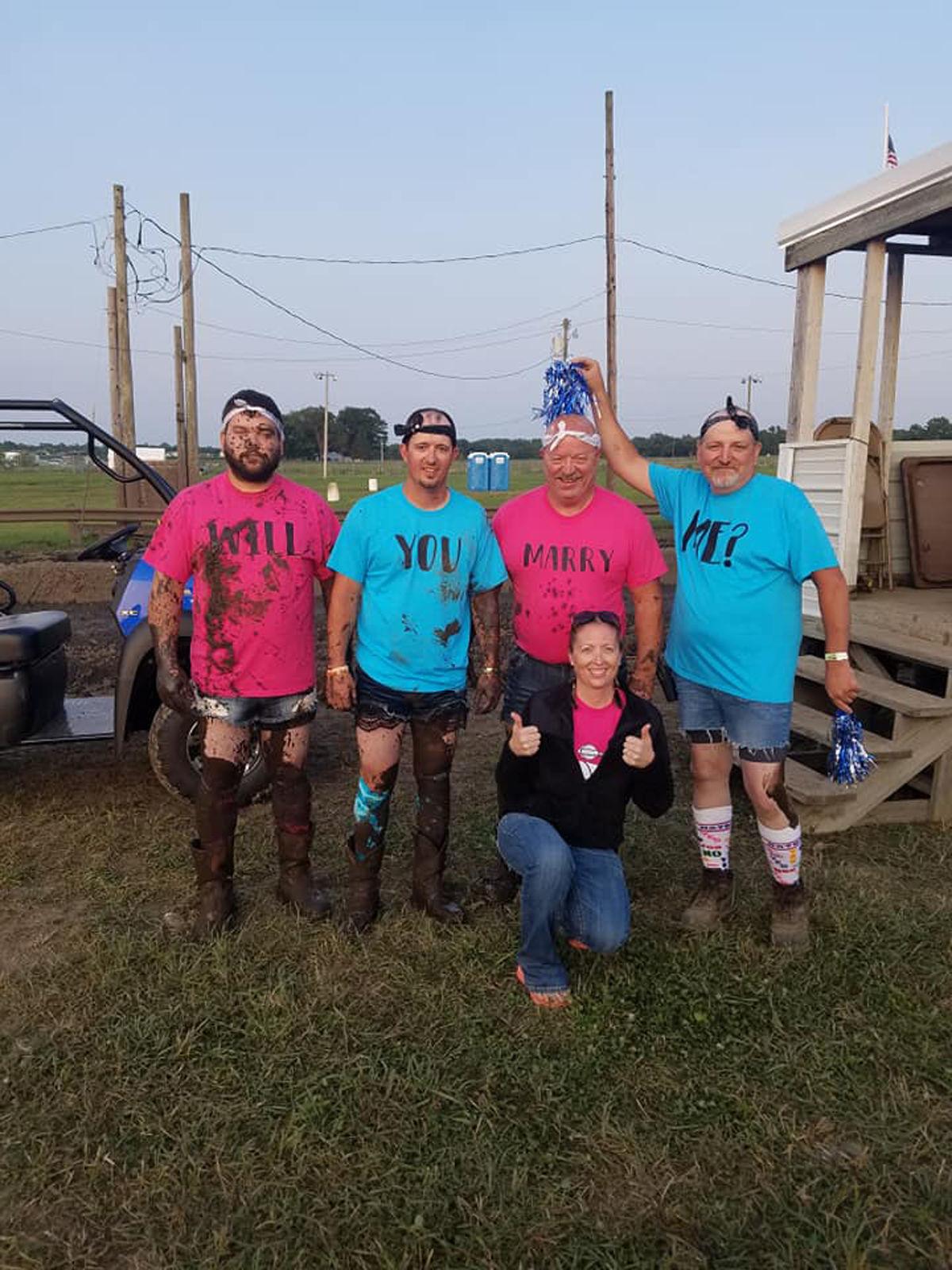 The men in their T-shirts that asked the question, “Will you marry me?” after the proposal, which was after they caught a greased pig at the Jasper County Fair last summer. 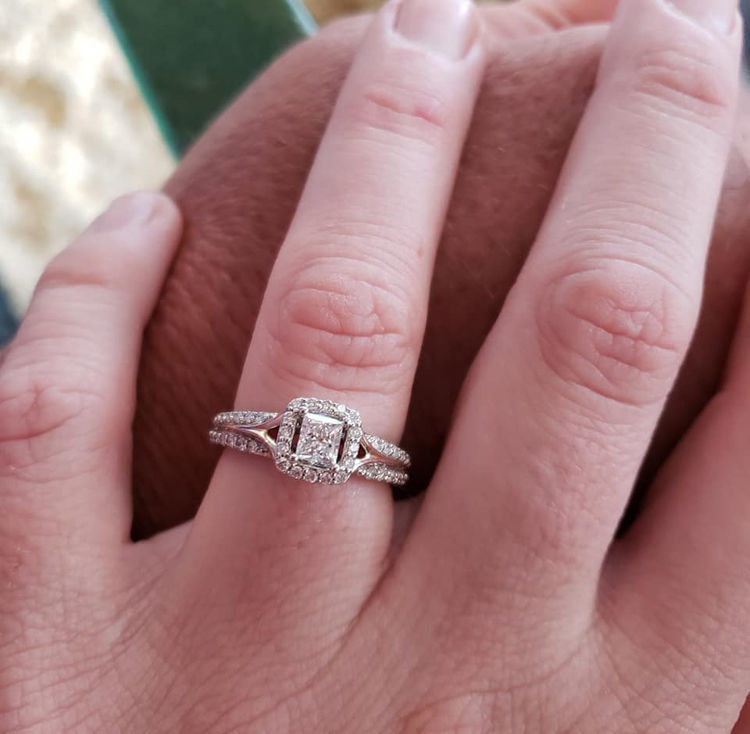 Jennifer wears the engagement ring Junior chose for her. 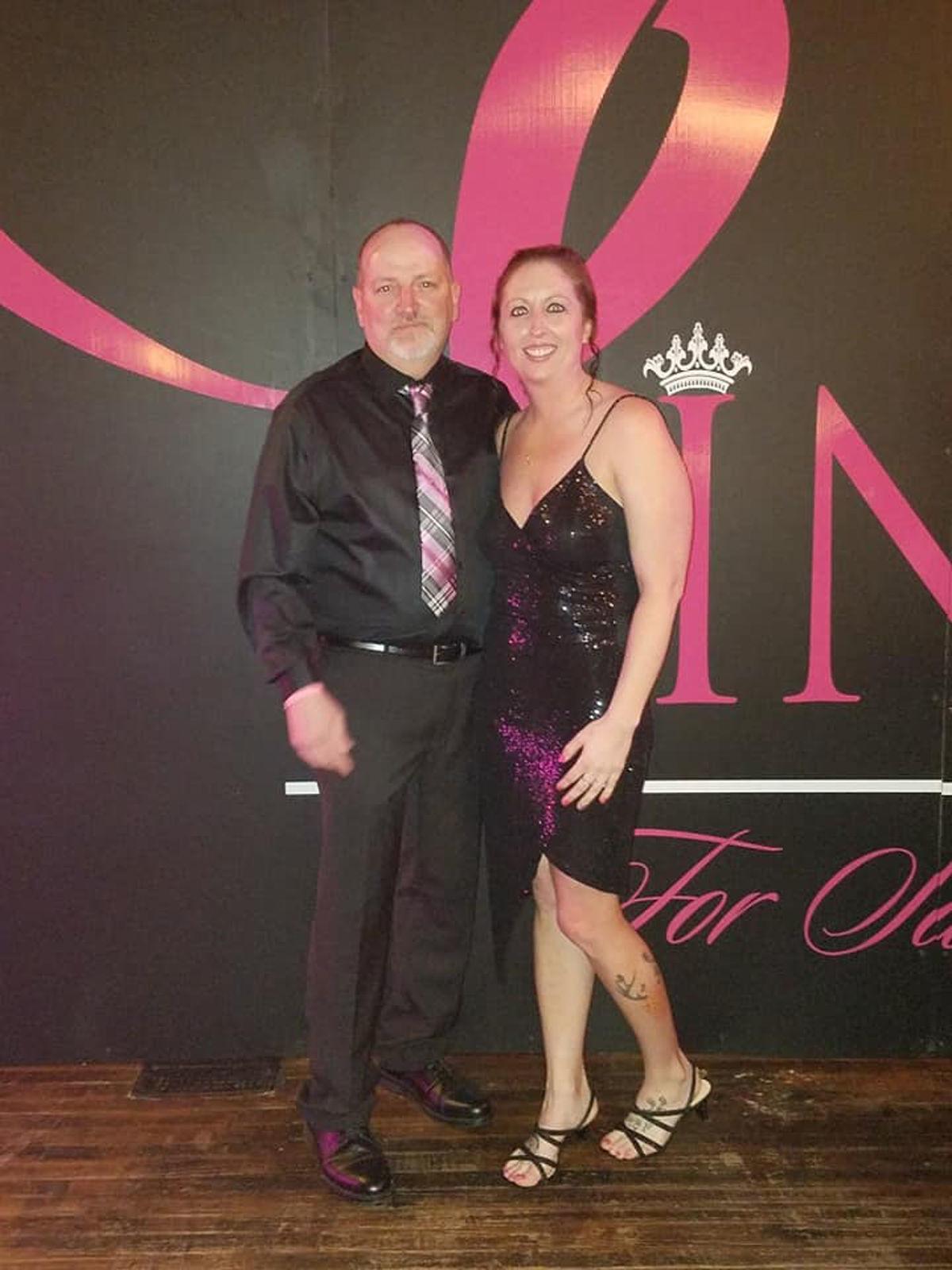 Junior and Jennifer attended the Pink Event in 2019. 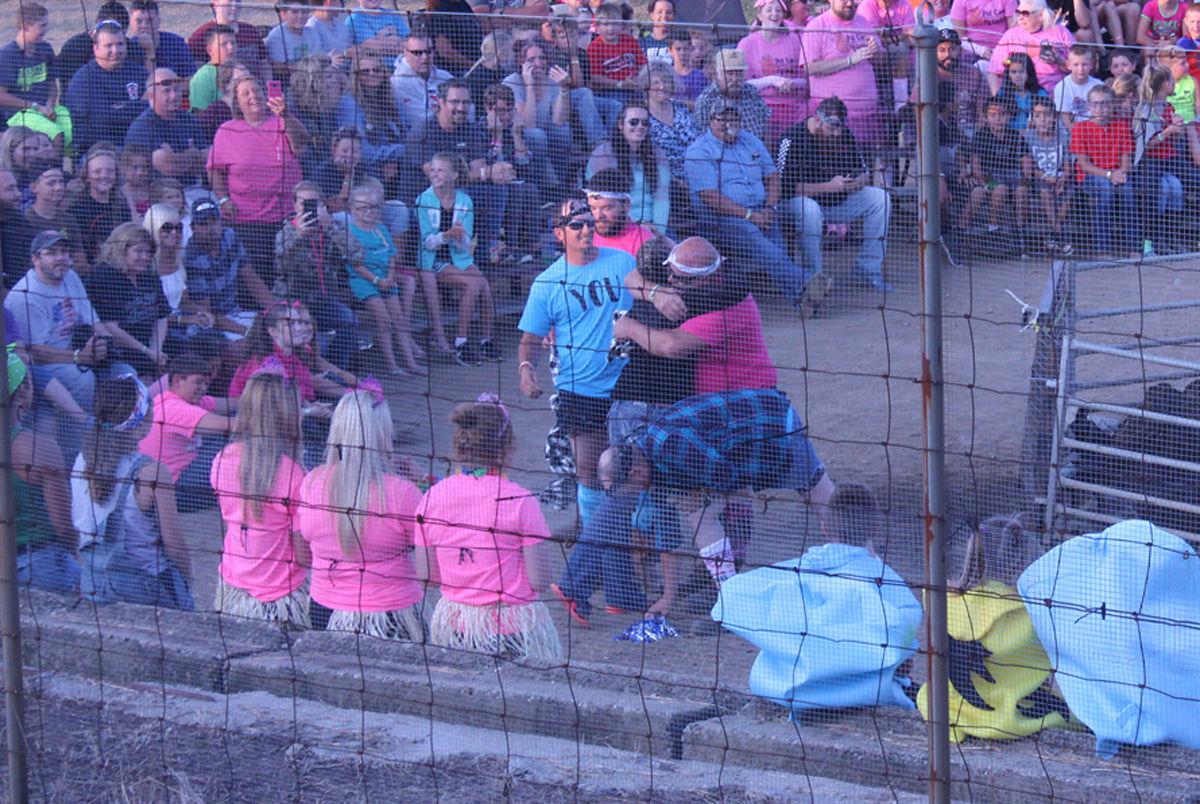 Jennifer and Junior hug after the proposal and her answer was “Yes!” with the whole grand stand audience and pig catchers watching.

The future Mr. and Mrs. Jordan are planning to wed in September.

The men in their T-shirts that asked the question, “Will you marry me?” after the proposal, which was after they caught a greased pig at the Jasper County Fair last summer.

Jennifer wears the engagement ring Junior chose for her.

Junior and Jennifer attended the Pink Event in 2019.

Jennifer and Junior hug after the proposal and her answer was “Yes!” with the whole grand stand audience and pig catchers watching.

The lights, sounds, and smells of the county fair bring back a flood of wonderful memories for many enthusiasts. From rodeos to monster trucks, death defying carnival rides to cute, gigantic stuffed teddy bears and unicorns, and let’s not forget some of the most amazingly bad for you, but so mouthwatering, deep-fried fair food. Attending the county fair is a must-do for everyone, at least once. Perhaps you’ll find something unexpected along the boardwalk.

Jennifer VanWienen found Delmar Jordan (“Junior”) at the Jasper County Fair. The two of them both worked on the Fair Board, but in the beginning they rarely crossed paths. In addition to her work on the board, Jennifer and her family cared for the restrooms on the grounds each night.

One night, after the rodeo performance, Jennifer, along with her mother and her sister, decided to take a different path to their next job site in hopes of seeing some cowboys kicking up their boots, settling in for the night. As the golf cart bounced along the path the trio came upon Junior strolling in the same direction. Junior hopped onto the golf cart unknowingly colliding his world with his future wife.

Jennifer and Junior’s first date is one of Jennifer’s favorite memories. They planned to see a couple of movies at a local drive-in but the night they planned to go they learned that someone close to them was also going to be there that night. Four’s a crowd when on a romantic date so the two of them chose a different drive-in movie theater.

They had no idea what movies were playing as they drove in but they quickly discovered that two Disney movies were gracing the big screens, one of which was a sequel to a movie Jennifer had not seen. Ditching the movies for dinner, Jennifer and Junior ended up going through the drive-thru at Wendy’s, eating dinner in the car at the Wendy’s parking lot. “It was a great first date even though things went wrong,” said Jennifer.

Jennifer and Junior decided early on that they did not want to get married, but sometimes the things we plan do not work out for the better. During a visit to the mall, Junior escorted Jennifer into a jewelry store, asking her to pick out the rings she liked. She didn’t know where to begin as she was looking at the price tag instead of the design.

The sales consultant would hand Jennifer a ring, she would see the price, and immediately hand it back. Jennifer ended up making a wish list but before they left the store Junior found a ring that he liked. Jennifer was thrilled that Junior picked one out as she really didn’t.

Junior, along with Jennifer’s whole family, devised a plan to propose to Jennifer at the fair last summer, during the annual Pig Catching Contest.

“Us girls have always been in charge of getting outfits for them (Junior, Jennifer’s father and brother, and one other team member). Believe me they look great each year! Usually my sister talks a lot about the outfits, but she didn’t this year, which I thought was because I was taking a summer college class and [she] didn’t want to bother me.

“Junior was walking out to the grandstand area when I was sitting at the gate and I told him that he needed to fix his socks because they were messed up. He kept walking and ignored me. The judges narrowed the teams down to have the crowd determine the winner of the costume contest.

“When his team was getting announced, they asked me to come out there and I said no because I do not prefer to be in front of crowds. My sister and mom ended up getting me out there and that is where he proposed!

“Each team member had a shirt under their flannel [that read] ‘Will You Marry Me’ on their shirts. Junior then pulled his socks up that I had told him earlier to do and on them was ‘Yes No or Maybe.’ Of course, I said yes after being totally embarrassed,” explained Jennifer!

This upcoming September the couple will embark on a new journey as husband and wife, by saying “I Do” at the Jasper County Fairgrounds, with a reception to follow at the West Exhibit Hall. Their nuptials will take place in the new gazebo that was donated by the Todd Hathaway family. The couple has chosen Malibu Blue and Begonia for their wedding colors with many deer-related accompaniments from Junior himself because Jennifer wants him to be a part of the whole process.

Jennifer has chosen a stunning ivory and champagne wedding dress to walk down the aisle in, following, Jamie Scholl, Matron of Honor; her daughter, Addisan Rahmoeller, as Maid of Honor; and her bridesmaids, Jodie Jordan and Jody Hoering, her daughter-in-law to be and her cousin, respectively. The groom will be accompanied by Best Man Kevin “Gaser” Gastineau, and groomsmen Cameron Jordan, Derrick Jordan and Dakota Jordan, all of whom are Junior’s own sons. Leading the processional are ring bearer Wesley Sheets, son of Patrick and Regina Sheets, and flower girl Lovelee Branam, daughter of Bobby and Mandi Branam.

When speaking of her husband to be, Jennifer states, “He is an amazing man and does whatever he can to help and be there for me. He listens to me and when I am mad and on a rant he does not say anything.” Sounds like Junior is the perfect match for Jennifer. May you both have a long life together filled with happiness and love.

A few showers this morning with overcast skies during the afternoon hours. High 44F. Winds N at 10 to 15 mph. Chance of rain 30%.

Some clouds in the morning will give way to mainly sunny skies for the afternoon. High 56F. Winds NE at 5 to 10 mph.