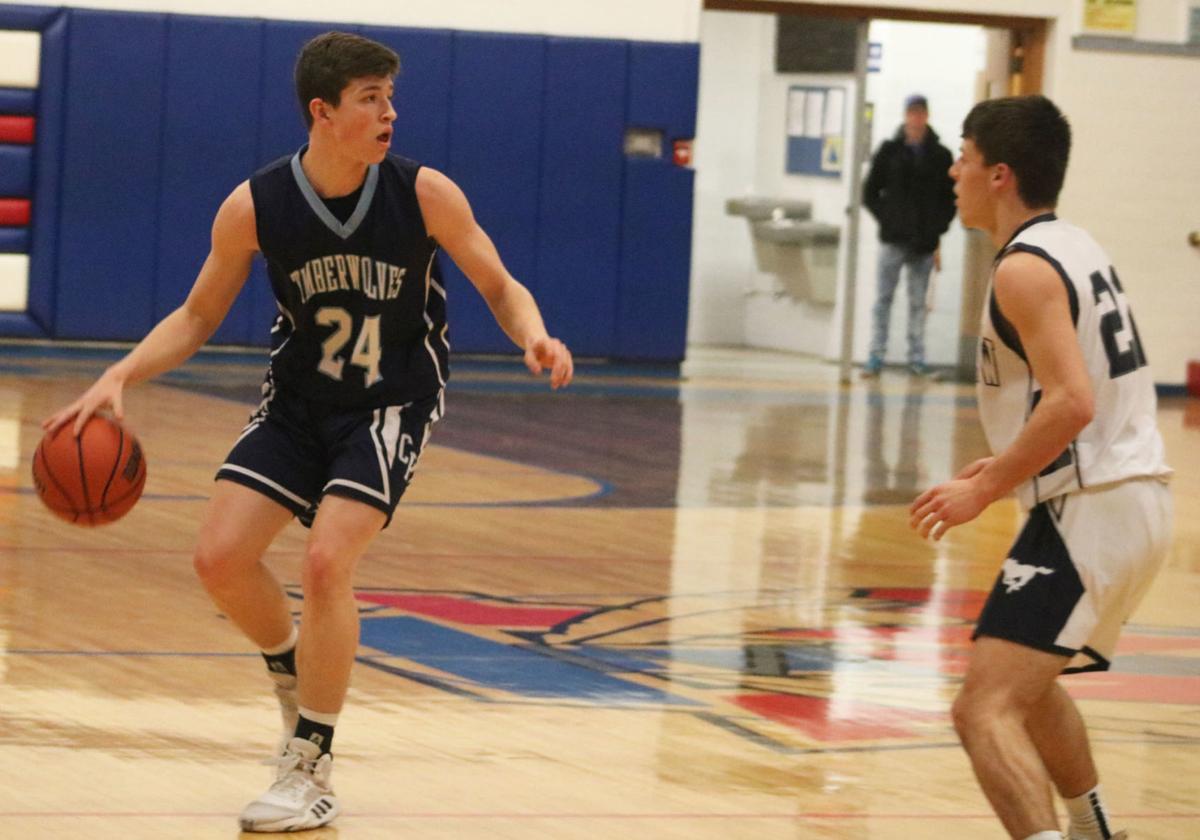 Cissna Park’s Ian Rogers looks for an open teammate during their regional title face off with the Ridgeview Mustangs on Friday night in Onarga. 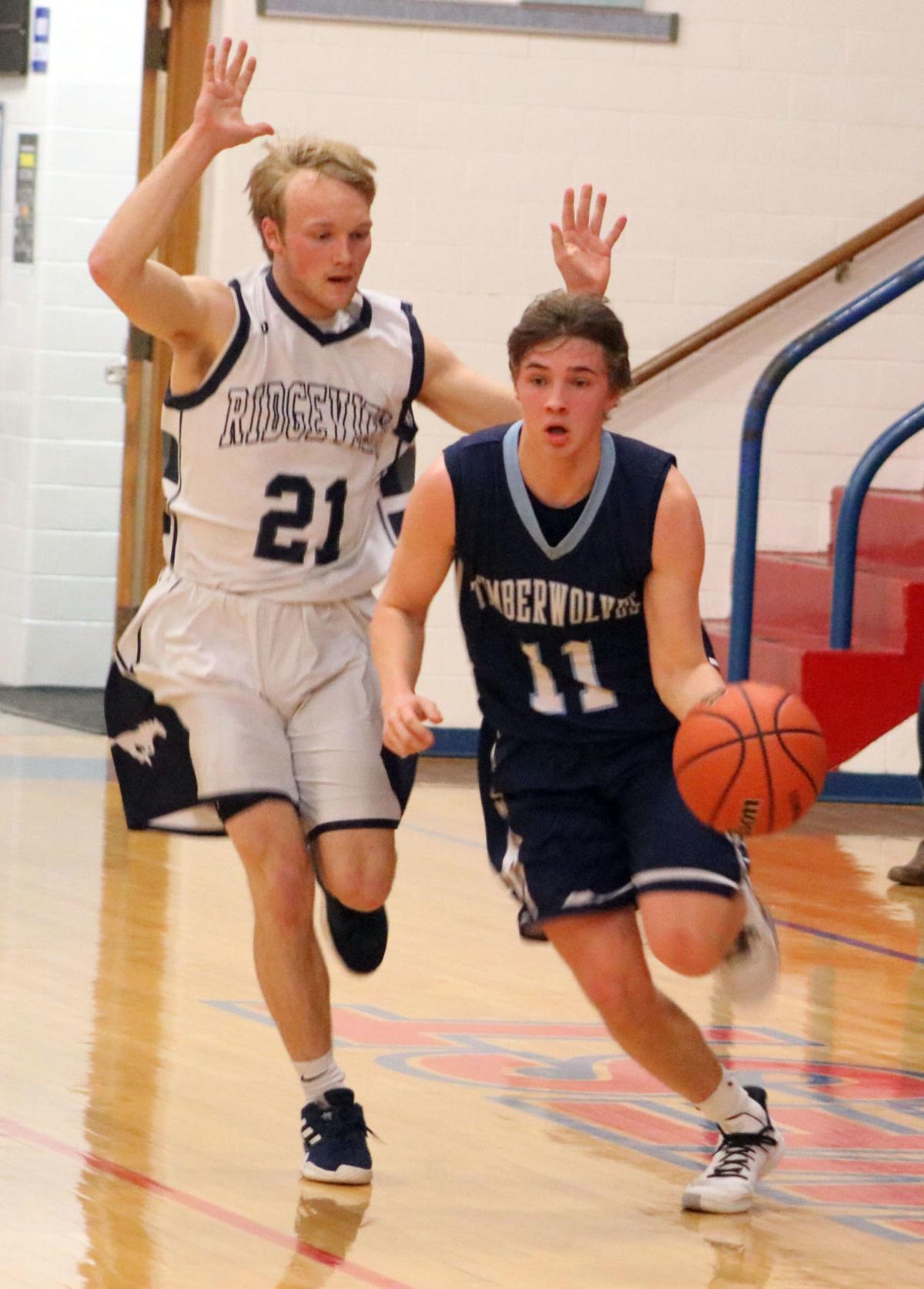 Keegan Boyle drives down the floor for Cissna Park past Ridgeview’s defense on Friday night.

Cissna Park’s Ian Rogers looks for an open teammate during their regional title face off with the Ridgeview Mustangs on Friday night in Onarga.

Keegan Boyle drives down the floor for Cissna Park past Ridgeview’s defense on Friday night.

As last year’s Class 1A state championship runner ups, the Cissna Park Timberwolves were a viable contender to take this year’s regional title taking place in Onarga. Unfortunately, the 20-10 T-wolves fell just two points shy of that being the case as they lost to the 24-9 Ridgeview Mustangs in an all-out battle.

At the tip-off, Cissna Park senior Penn Stoller was able to get his team the possession to start but resulted in no points. Ridgeview put themselves on the board first with a layup at the 7:08 mark taking a 2-0 lead over the Timberwolves. A successful three-pointer from the Mustangs at just under the six-minute mark followed by a layup from Garrett Stevens then gave Ridgeview a 7-0 lead over Cissna Park. Cissna Park then called a time out with 4:04 on the clock after Ridgeview’s Levi Zimmerman manages the team’s second three-pointer of the game to give them a 10-0 lead. A jumper from the Mustang’s Reece Ramirez extended their lead to 12-0 as things started to look bleak for the Timberwolves. But, a successful three-pointer from Cissna Park’s Ian Rogers finally gets the T-wolves on the board with just over three minutes left in the first quarter of play. Stoller then lands a three of his own at the 2:20 mark to shorten CP’s defect to six, 12-6. The Timberwolves’ Malaki Verkler was then sent to the line on a foul to make one of his two shot-attempts to give CP 7 to Ridgeview’s 12. Each team was able to get another two points apiece to end the quarter 14-9.

In quarter two, the Mustang’s Zimmerman started things off with a three-pointer to extend their lead 17-9 over Cissna Park. A layup from Stoller followed by a three from Bryce Sluis got the T-wolves to 14 to cut Ridgeview’s lead to just three points 17-14 with 5:20 on the clock. A layup from the Mustang’s Dylan Jones with 4:20 on the clock making the score 19-14 but a layup from Stoller cut the score back to three points, 19-16. Ridgeview’s Ramirez then drew a foul with 3:55 left in the game and managed to make both then managed a jumper 30 seconds later to extend the Mustang’s lead to 23-16. A basket from Zachary Cavinder then got the Mustangs to 25. CP’s Verkler was then immediately fouled to make one of two shots, with Rogers rebounding to score a layup and make the score 25-19. Ridgeview’s Stevens was then fouled with under two minutes left in the half to make both shot attempts making the score 27-19 with neither team able to score again to move into half-time.

Both teams exchanged baskets to start quarter three, 29-21. A layup from Stoller just under six minutes and another three-pointer cut the Mustang’s lead back to three points 29-26. At the 3:10 mark, Stevens was able to get a shot off with Ramierz grabbing a layup 45 seconds later allowing the Mustangs to jump back out to a seven-point lead 33-26. Stoller then found an opening to put the ball up for two which was answered with a layup from Ridgeview, forcing another CP timeout with 2:10 left in the quarter. When play resumed, Rogers managed yet another successful three-point shot followed with a layup by Verkler to end the quarter with Ridgeview leading by just two points 35-33.

The Mustang’s started the final quarter of play putting up five points before exchanging baskets to make the score 42-35 at the 5:45 mark. A three from Zimmerman put the score back to a 10 point game 45-35 with Ridgeview then calling a time out. Each team was then able to put up four points apiece before CP’s Keegan Boyle managed to land a much-needed three-pointer with 2:12 left in the game. Rogers was then able to land another three at the 1:38 mark to make it a four-point game allowing CP to call their final time out with the score at 49-45. Ramirez then draws a foul with 1:18 on the clock and makes one of two shots to make the score 50-45. CP’s Speirs manages to then drive down the court to land a successful three-pointer cutting the game to two points once again, 50-48. Zimmerman is then sent to the line to make both shots for Ridgeview after the T-wolves’ Verkler gets his fourth foul of the game making the score 52-48. With just 12 seconds left, Cissna Park’s Rogers manages the final successful three-pointer of the game to cut Ridgeview’s lead to just one point, 52-51. However, the Mustang’s Stevens manages to draw a foul and land both free throw shots, 54-51. Rogers did make one final three-point shot attempt in which he was fouled, giving him three free-throw attempts. Rogers manages to make the first two before Ridgeview calls their final time out. After the timeout, Rogers is then sent back to the line where unfortunately hung long to hit the back of the rim and bounce off giving the Mustang’s the win by just one point, 54-53.

Leading the Timberwolves at the rim was Ian Rogers with 16 points followed by Penn Stoller with 14. Verkler also contributed eight points while Boyle grabbed seven.

“This was my first season as coach and I told them I wouldn’t want it any other way,” said Cissna Park head coach, Seth Johnson.

“I can’t take 75 percent of the credit for the success this team’s had, it’s all due to them. They’re great kids who have a winning mentality. They fought multiple deficits tonight to get it down to a chance to tie it with a free throw and we just barely missed it. I can’t ask for a better group of guys.”

A few clouds. A stray shower or thunderstorm is possible. Low 67F. Winds S at 5 to 10 mph.