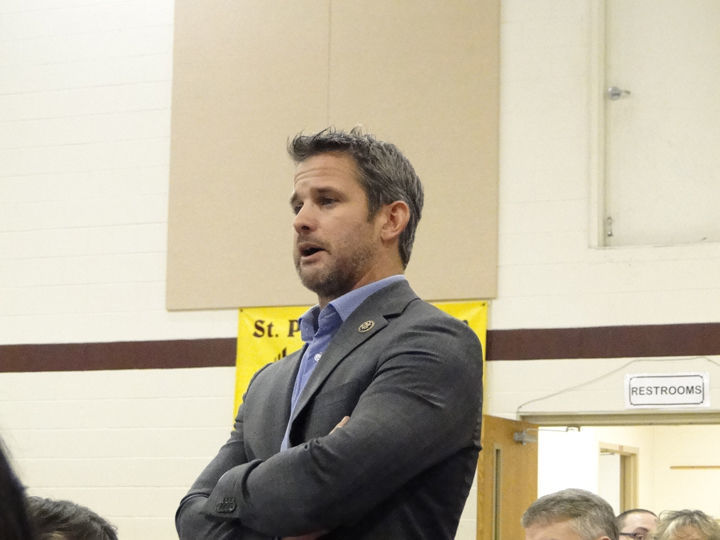 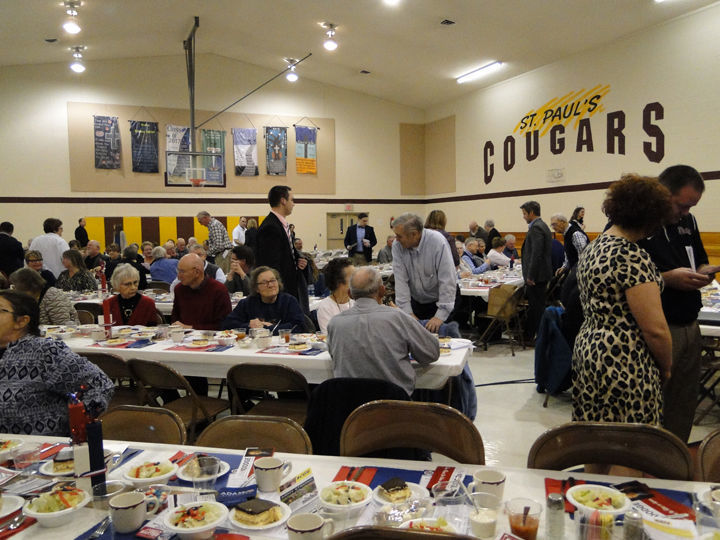 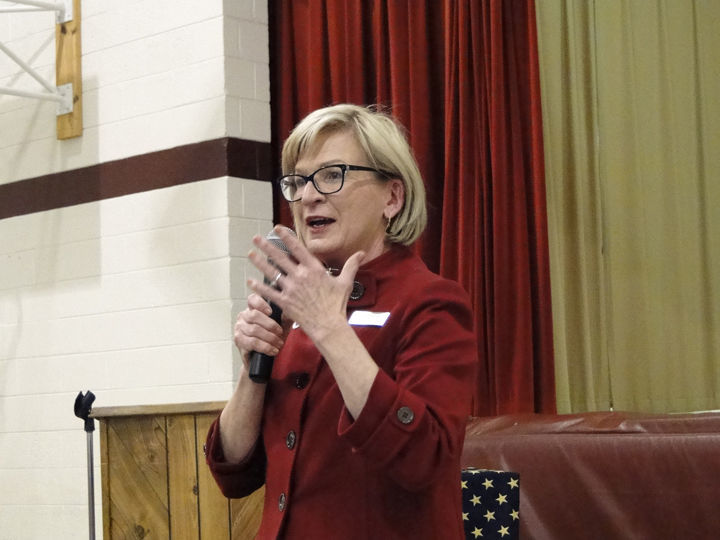 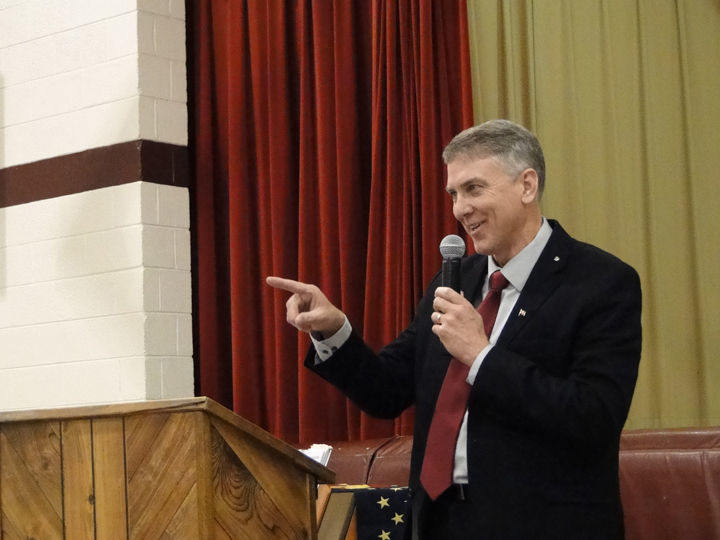 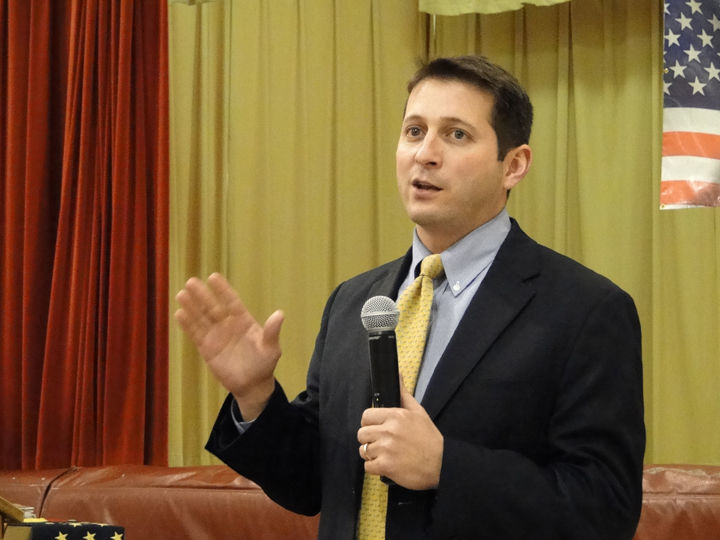 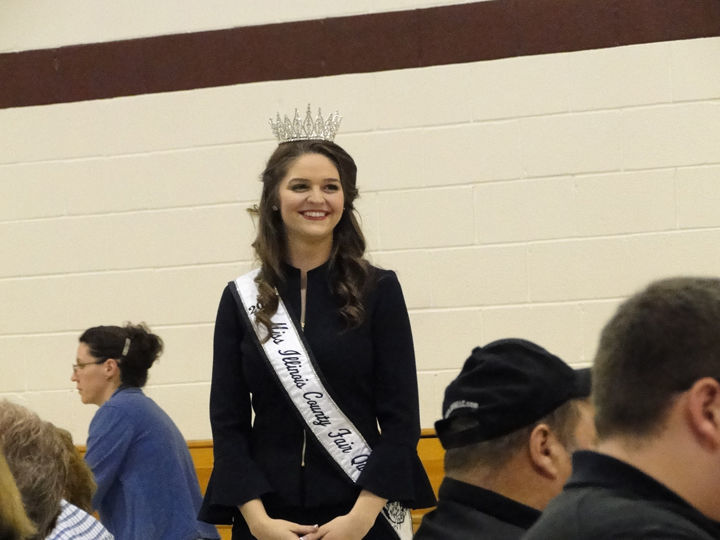 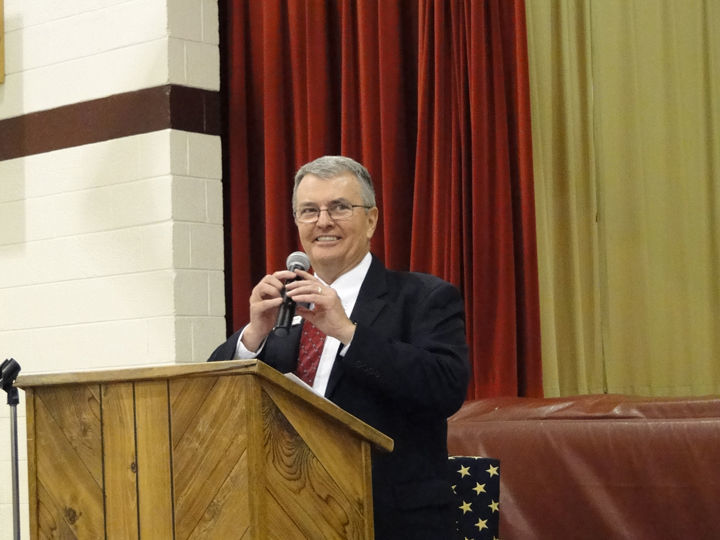 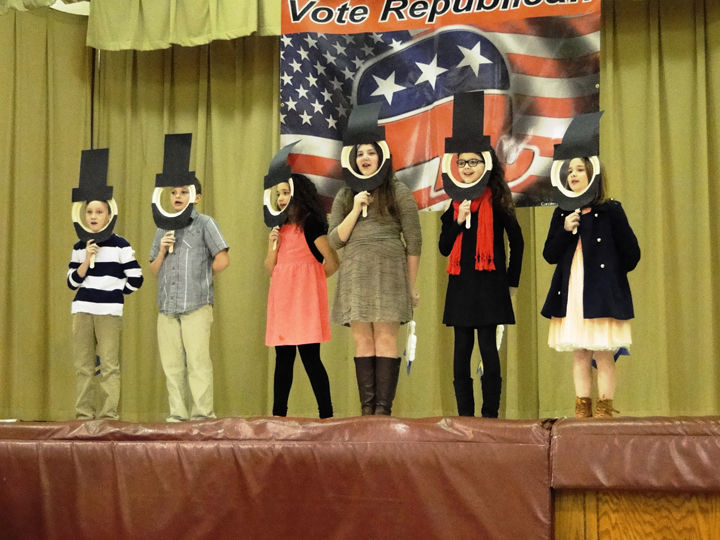 The CCGS fourth grade students led the Pledge of Allegiance, sang the state song and “God Bless America,” plus they were asked to sing “Happy Birthday” to Erika Harold, Presidents George Washington and Abraham Lincoln, the state of Illinois. 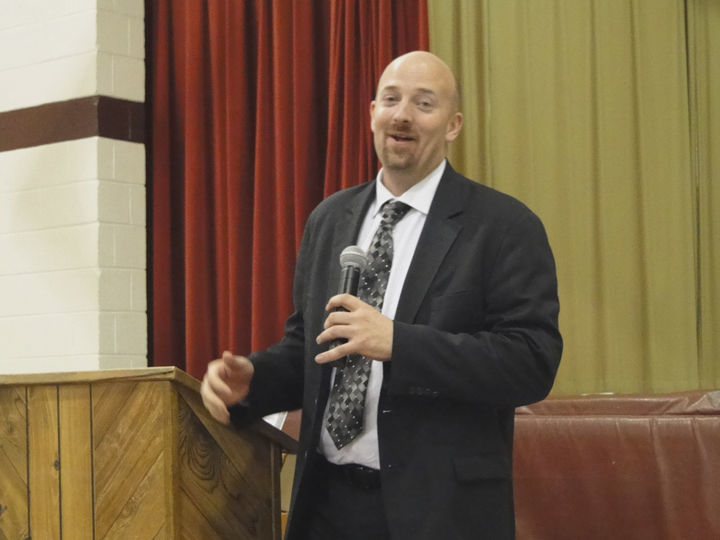 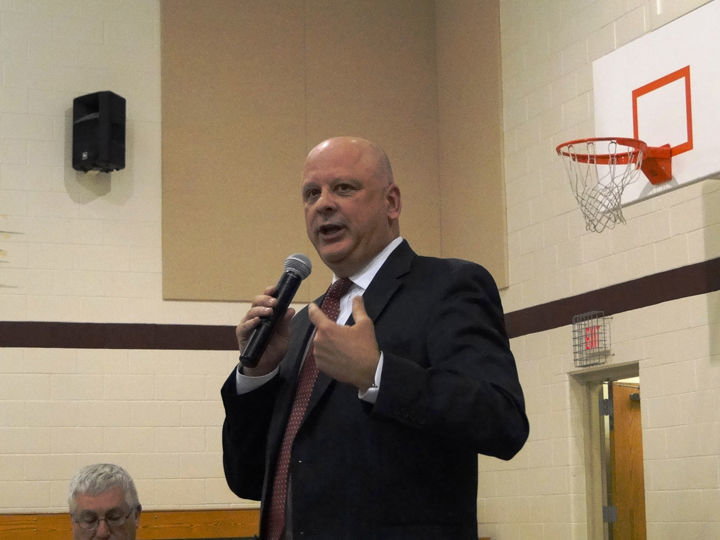 The CCGS fourth grade students led the Pledge of Allegiance, sang the state song and “God Bless America,” plus they were asked to sing “Happy Birthday” to Erika Harold, Presidents George Washington and Abraham Lincoln, the state of Illinois.

Despite the adverse conditions in areas of Iroquois County, the annual Lincoln Day Dinner, hosted by the Iroquois County Republican Central Committee, had a great turn out. The event took place Feb. 22 in the gym of St. Paul’s Lutheran School, Woodworth. It was a time for area Republicans to meet with political candidates, hear their views and platforms, and get an understanding of each candidate’s passion in government.

Paul Ducat, vice chairman of the ICRCC, gave the welcome, followed by the Pledge of Allegiance. The pledge was led by the fourth grade students of Crescent City Grade School: Cale Hamilton, Maddie Reardanz, Emma Janssen, Kenleigh Hendershot, Hunter Wolfe and Traeh Kissack. They were accompanied by their teacher, Jody Munsterman.

As Governor Bruce Rauner was heading to Watseka to visit a shelter, he took the floor first. He told attendants “You believe in our party. The values of our party are the values that make America great.” He said he is committed to making sure Republicans are the majority of the state. He noted “I’m not a politician, I’m a businessman” and he is dedicated to three values: hard work, great education and giving back. He shared he had been told by his friends to take his business out of state but “I will never leave Illinois.”

Rauner said “we need to change the culture of corruption” by setting term limits and he noted “I don’t want to ask for your vote, I want to earn it.”

Susan Wynn Bence, Watseka, president of the Illinois Federation of Republican Women, spoke of Adam Kinzinger as she introduced him. Kinzinger was also headed to Watseka with Gov. Rauner. In his speech, he noted “I am proud of what the President and Congress accomplished last year.” He told how he was actually born in Iroquois County and because of helping at a homeless shelter, managed by his father, he realized “people have potential.” He feels it’s important for everyone to realize their own potentials and noted “what we (Republicans) want to do as a party is not be cold and heartless.”

He told attendants, “It has been an honor to represent you in Congress. There will be differences but we are a party that will stand together. We’re going to restore the mission of Ronald Reagan.”

Samantha Hasselbring, of the Cissna Park area, was present and recognized. She was recently crowned Miss Illinois County Fair Queen, the first ever from Iroquois County. She thanked the ICRCC for inviting her to the event.

Wynn Bence then introduced Erika Harold, candidate for Illinois Attorney General, giving a brief background. Before inviting Harold to the podium, she noted Harold had a birthday on Tuesday so she asked the CCGS fourth graders to sing “Happy Birthday” to her. Harold was overwhelmed and gave hugs to the students before her program.

Harold, who was Miss America 2003, noted she took an unconventional path to become Miss America. She had graduated from the University of Illinois and wanted to attend Harvard Law School, but the overwhelming cost was $175,000. So, in becoming a part of the pageant and winning the title, she was able to use that money to pay for her law degree, graduating in 2007. She said to the fourth graders, “Never let anyone discourage you from achieving your dreams.”

Harold, now seeking the office of Illinois Attorney General, is an attorney at Meyer Cappel, one of the largest law firms in Champaign County. She noted her priorities for that position: 1) She wants to make sure the rule of law is enforced and the Constitution is upheld; 2) She wants to take on the problem of public corruption. She said, “I will commit to you to fight corruption” and noted she wants to fight public corruption regardless of (political) party. 3) She wants to have Workers’ Compensation Reform – creating more jobs, offering more opportunities and keeping businesses. 4) Facing the opioid crisis and 5) having Criminal Justice Reform in which there will be greater use of drug courts and mental health courts.

She finished her speech with “You will matter to me as your next attorney general.”

Next up was Illinois governor candidate Jeanne Ives. Ives gave some background on herself: she was a West Point graduate, a former military officer, she is a three-term state representative, and she and her husband have five children. She took time to extend her appreciation to the St. Paul’s Lutheran Parent-Teacher League for the work they did in hosting the evening’s event and supper.

In Ives’ opinion, “Rauner has failed.” She said she had begun her day in Flossmoor at a new Planned Parenthood site. She noted, “We (Illinois) are a sanctuary state. …People have no enthusiasm for the governor. He should not be a representative of the Republican party in the state of Illinois.”

Ives continued, “He (Rauner) lies about my record. Our caucus does not trust him, our Senate does not trust him. What are you (voters) going to do about it?” She then shared a couple of her points in her campaign against Rauner for governor: 1) Rauner used taxpayer monies to pay for abortions-on-demand, and 2) he used downstate tax dollars to bail out the Chicago public school system. She concluded with “I am happy to be your future governor.”

Following Ives was Jason Helland, candidate for Secretary of State. He asked, “Are you excited about the upcoming election?” to which he said, “So am I. I just got my first autograph request.” Getting to a more serious note he said, “It’s time to make a change.” Helland, currently Grundy County State’s Attorney, is hoping to get the votes in March in order to face incumbent Jesse White in November.

Jason Marter, candidate for the 16th Congressional district, said this was his third year in a row to attend the Lincoln Day dinner. He thanked all who put the event together and said, “It is so important to get the Republican message out there.” He noted Trump had won every county in the 16th district but “Kinzinger would not support him.”

Marter wants to cut the size and scope of the federal government: “It’s time to cut the nonsense, cut the spending … we’re Republicans – we need to go on offense, not defense.”

State treasurer candidate Jim Dodge then addressed the audience and began by asking “Is anyone else worried about the future of Illinois?” He said all the candidates are deeply passionate about Illinois but “In the treasury, your money’s not working as hard as it can.” He also feels there’s no need for two offices – those of treasurer and comptroller – they could be as one.

Dodge finished, “We can win this as a team. If you like the future we need to come together.”

Darlene Senger, candidate for Illinois comptroller, began by thanking the attendees and the CCGS fourth graders. She told why she would like to be comptroller: Three and a half years ago, after the passing of Judy Baar-Topinka, current comptroller Susana Mendoza won the position in a special election.” Senger said, “She has voted for every tax increase. She voted for every budget that spent more. She’s a politician.”

Senger shared she has a financial background. She concluded by saying “We need to make sure those we have in office will represent you.”

Senator Jason Barickman, of the 53rd District, noted upon returning from the shelter in Watseka, “you’ve got some great people up there in Watseka.” He said it has been “an honor to represent you in Springfield, along with Tom Bennett. It’s important on March 20 to support all the candidates up and down the ballot.” He concluded by noting his pledge to “support any of the Republican candidates.”

Tom Bennett, State Representative of the 106th District, also visited the Watseka shelter and noted there were 89 in the shelter. He thanked attendants for “hanging on and for coming” to the dinner. He said there’s an individual responsibility to Republicans: “It’s not just hopes and dreams, it’s about the people – it’s the hopes and dreams of the people in this room.” He finished by noting the “ideals and values we talked about are alive and well.”