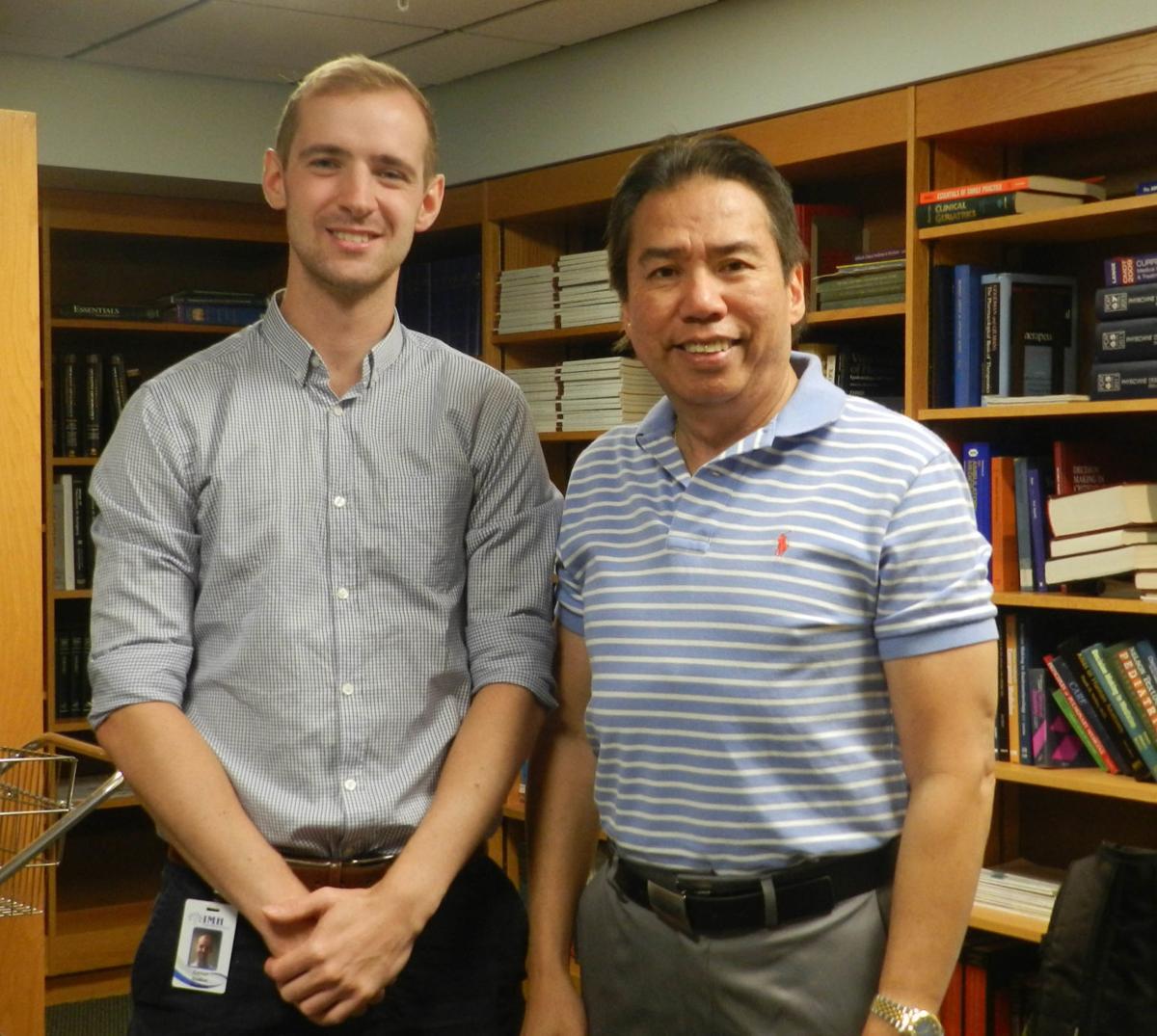 Conor Cooper, a medical student from the University of Aberdeen in Scotland, is working with Dr. Gonzalo Florido, while he is in the United States doing research on the opioid crisis. 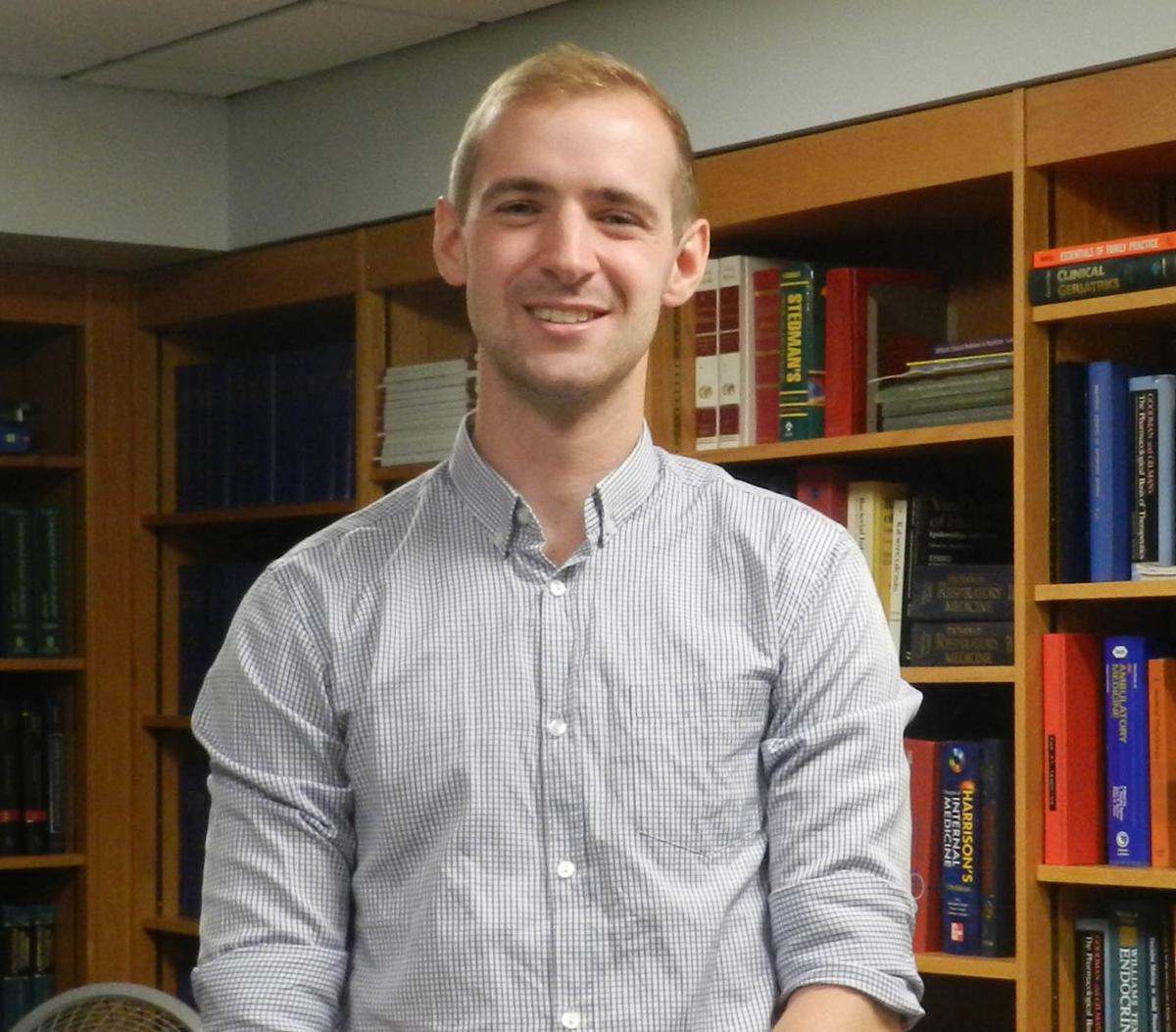 Conor Cooper, a medical student from the University of Aberdeen in Scotland, is working with Dr. Gonzalo Florido while working on a research project in the United States.

Conor Cooper, a medical student from the University of Aberdeen in Scotland, is working with Dr. Gonzalo Florido, while he is in the United States doing research on the opioid crisis.

Conor Cooper, a medical student from the University of Aberdeen in Scotland, is working with Dr. Gonzalo Florido while working on a research project in the United States.

A medical student from Scotland is spending time in Iroquois County doing research on the opioid crisis.

Conor Cooper is working with Dr. Gonzolo Florido. Cooper will be in Watseka, Rockford and Chicago doing some of his research. While in Watseka he will be doing his research and shadowing Florido at Iroquois Memorial Hospital.

Florido said, “At the University of Illinois-Rockford, College of Medicine, they have two programs. One is the rural health program and the other is the straight medical program.

“In the rural health program they have to rotate in some rural areas, four months rotation, and they do community projects,” he said.

“Since I teach and supervise medical students, this is like an exchange program,” he said, noting that he has participated in the program off and on for several years.

Cooper is in his sixth year of medical school.

“So I think they are already doing medical school right from the start,” he said.

Florido and Cooper said the opioid crisis is not just a problem in the United States.

“Here in the U.S. we have this opioid epidemic and our government is trying to curtail the use of these controlled substances,” Florido said.

Cooper said, “There’s a bit of a problem in the U.K., but it’s not nearly as big as it is here, but it’s sort of noticed that prescribing is going up and up and up this year, which is not a trend you want to see.”

Florido said there are plans to have providers take part in programs so they learn about use of controlled substances. “In Indiana, it’s a requirement that we do a certificate of completion for the use of opioids in our patients. You cannot have this license without passing some questions regarding use of opioids. I think it’s a good project. It is timely and it is very relevant to our times.

Florido said Cooper chose to come to a small town because he wanted to.

By comparison, he comes from Aberdeen, Scotland, and the University of Aberdeen has about 10,000 students, he said.

Cooper was born in Australia. His mother is Irish and his Australian. “They met in Australia and I lived there for the first five years of my life,” he said. The family then moved to Edinburgh, Scotland, that nation’s capital, where Cooper and his siblings grew up. He has an older brother and a younger sister. His younger sister is studying dentistry.

While his parents are not doctors, Cooper said he was always good at science and decided that he wanted to apply for medical school.

“I got into the University of Aberdeen and just loved it,” he said. Aberdeen is in the northern part of Scotland, where the communities are a bit more rural, and he became interested in rural medicine.

“You see a lot small hospitals like this and a lot of small GP (general practitioners) practices,” he said.

“The last year of medical school you get the opportunity to do a project you want to do. It’s part of the course and you are allowed to go abroad to do it,” he said. “I kind of follow U.S. politics and U.S. issues and I’d been reading about the opioid stuff and I thought that would be a interesting project to do. I thought it would be relevant to tie it to the U.K. stuff, too.”

As luck would have it, one of the instructors at the University of Aberdeen is from Milford and knows Florido.

Dorothy Corriveau is a teacher at the University of Aberdeen and helped Cooper get this research trip organized.

He has been in the U.S. just a few days, arriving in Chicago at Aug. 26, where he stayed and then drove a rented car to Watseka the next day.

He will be here four weeks, traveling between Rockford and Watseka.

While here he will be working on the research.

“The opioid epidemic crisis is multi-faceted. There’s a corporate element to it, there’s a regulatory element to it. The one I’m focused on as a medical student in is the clinical element. How much of it is to do with doctors maybe having the wrong ideas about opioids, maybe not enough understanding of opioids,” he said.

Cooper is developing a survey with 10 to 12 questions. “Asking simple things like how they would grade their own knowledge, asking them about guidelines they know of…there’s a new guideline by the CDC (Centers for Disease Control) that was published a couple of years ago, I’m asking if they are familiar with that. Then getting a sense of their core beliefs about opioids, so what situations they think it works in. Which patients are do they find are more likely to come asking for them. Whether they feel under pressure to prescribe less opioids now or maybe under more pressure to prescribe opioids.

“Then at the end I will have a few questions about alternatives to opioids. The big problem with opioids and has been for years, there’s no real substitute for pain treatment and it’s the only thing that’s going to help to treat the kind of pain that opioids can treat. And then I will ask what is what is the future of pain management if we are scaling back the opioids? Does it need to be multi-faceted? Do we need to try to drugs that look at different areas of the body and think more about psychology, exercise?”

One other questions will be about how they feel about medical marijuana, he said.

Cooper said he will make the survey universal enough that many different type of healthcare providers can answer it. “So in theory a pharmacist can answer the survey and say what their experiences are with opioids and in theory a nurse as well, or a nurse practitioner could answer as well. So yeah, a broad range.” He said he didn’t want to focus on just a pain specialist, particularly in a rural area where there might only be one such doctor.

“I’m trying to make it as broad as possible,” he said. “I think so many people have to know about opioids and probably every single doctor has prescribed an opioid.”

Florido said, “We have to utilize other things for controlling pain besides opioids.” Using physical therapy and counseling can also be used in some cases.

There are more and more precautions being taken with prescribing opioids, Florido said. “Right now when we have some patients who we prescribed these medicines we have to sign some agreements that they are to go to only one pharmacy. When they get lost, we are not going to refill them. You have to take care of your medications. Put them in a safe place and lock them up so no one else can get them.”

Doctors also have to do drug testing in some cases, he said, to make sure that the patient is actually taking the medications. If they aren’t there is the possibility that the medications are being shared or sold.

“It’s becoming more strict. Sometimes I feel sorry for the people who are really in pain,” he said. “We have to be strict with them, too.”

Cooper said that is the other side of it. “You’ve got people in pain and that’s not good, either,” he said.

Florido said some patients who have had several surgeries and need more pain medication are referred to a pain specialist.

While Cooper is in the United States he also will be shadowing Florido as he makes his rounds. Florido said he wants Cooper to experience some of the small town festivities in the area and also see some of the urban areas. “Rural America,” he said. Florido has taken him to a few of the local restaurants and plans to get him familiar with the area.

Cooper said he is fascinated by being in the United States.

He said Chicago was fascinating. He quickly got used to driving on what is the “wrong” side of the road to him. “I missed one stop sign, I think, by accident because I wasn’t looking and suddenly I realized there was a stop sign. In U.K. whenever you get to a junction there’s a roundabout and here it’s all just stop signs and traffic lights and whatnot.”

When he finishes in the United States Cooper will head back to Scotland to finish up a few placements to do and a practical exam and then will be a doctor. That will be about six months after he leaves the U.S.

He said he plans to apply to work in Glasgow. “You don’t quite specialize yet. You get a few years of multiple rotations, so doing general kind of stuff, general meds, general surgery and maybe pick a few specialties, as well. So I’m going to try to do that in Glasgow and then hopefully find a specialty I’m interested in and apply for that.”

He plans to stay in Scotland, at least for the first two years. He’s not opposed to practicing outside of Scotland at some point, he said.