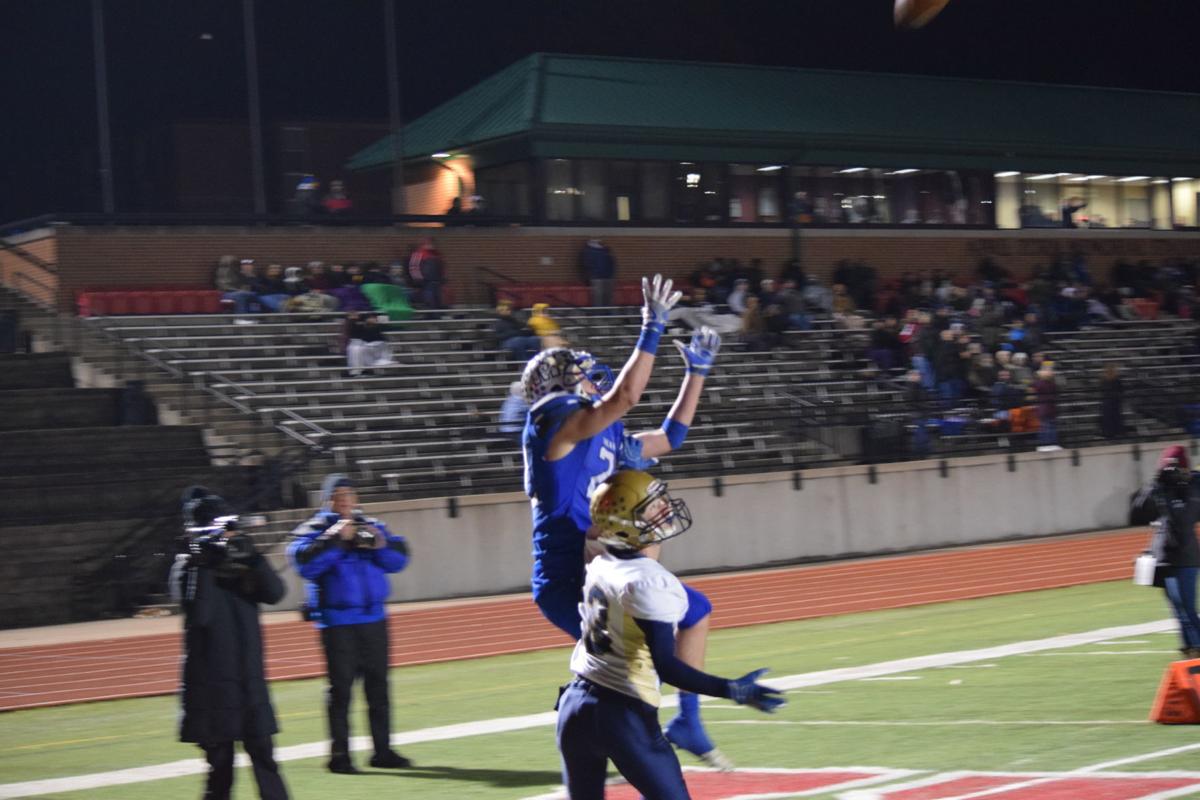 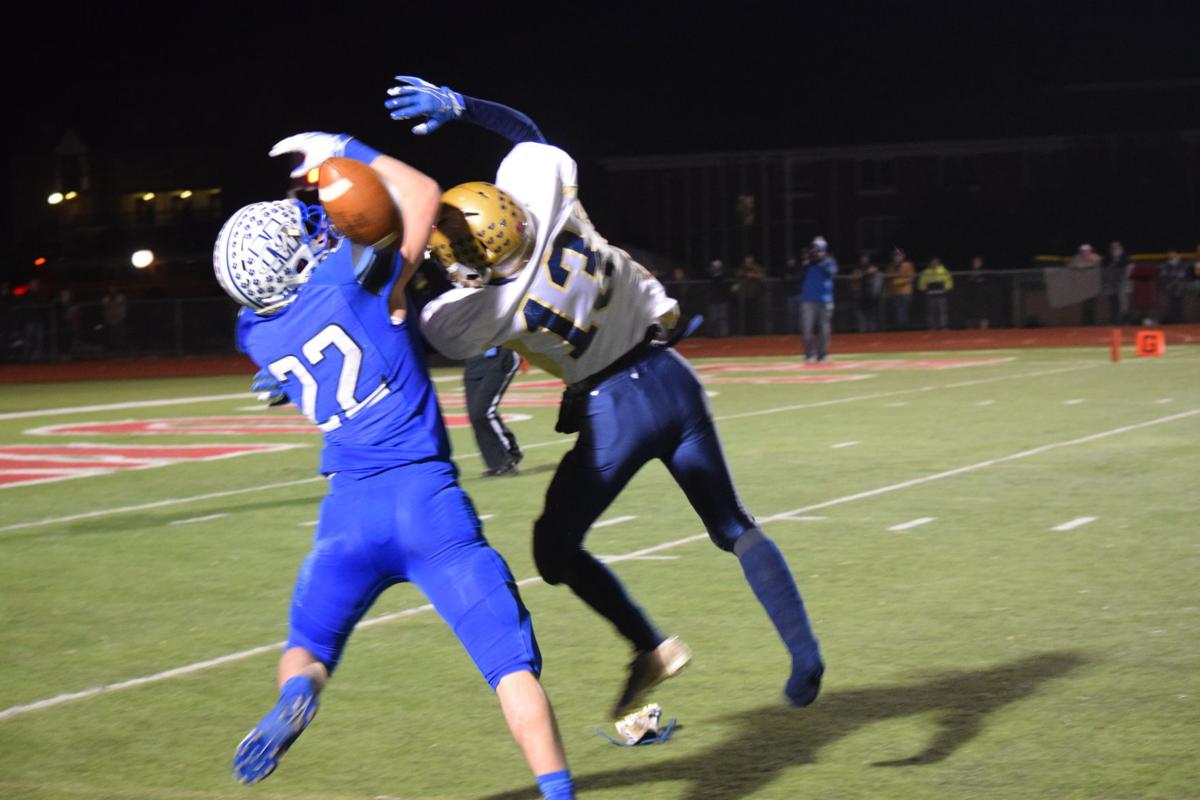 MCP’s Keegan Boyle (22) tries to pull in a pass against Polo Friday in the I8FA state championship game at Monmouth. 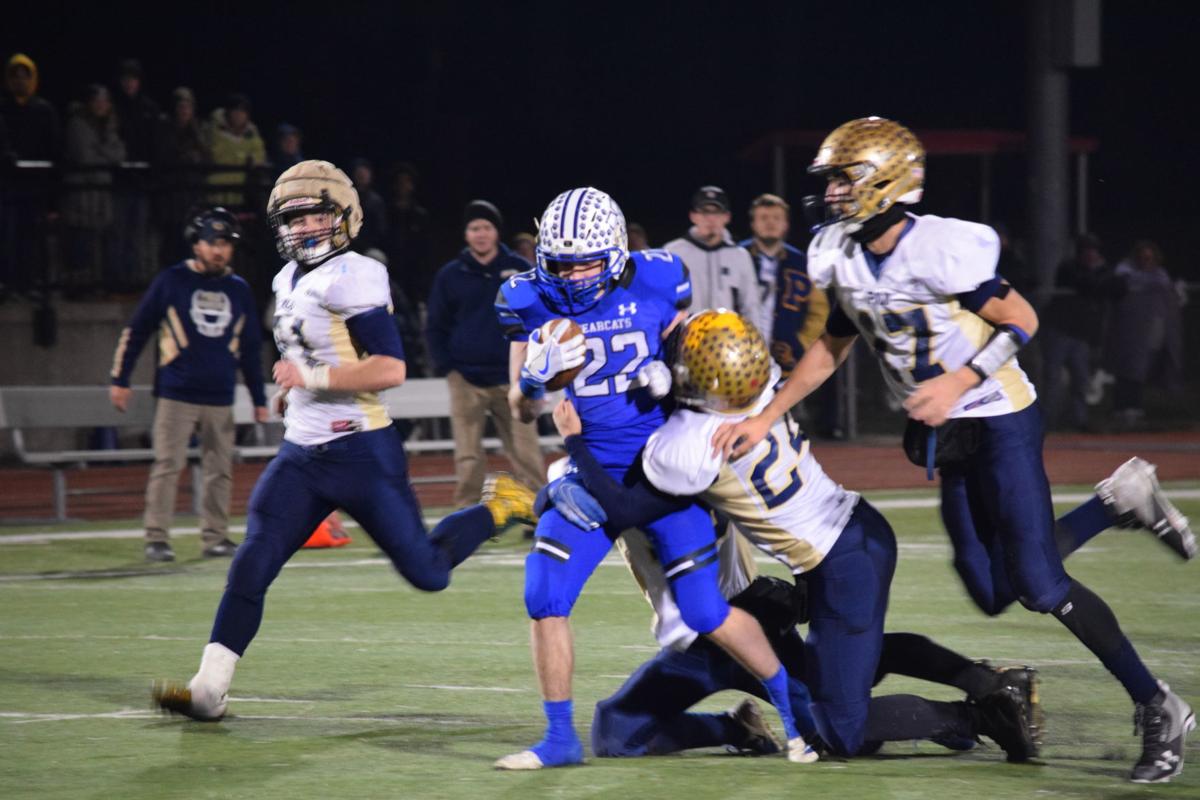 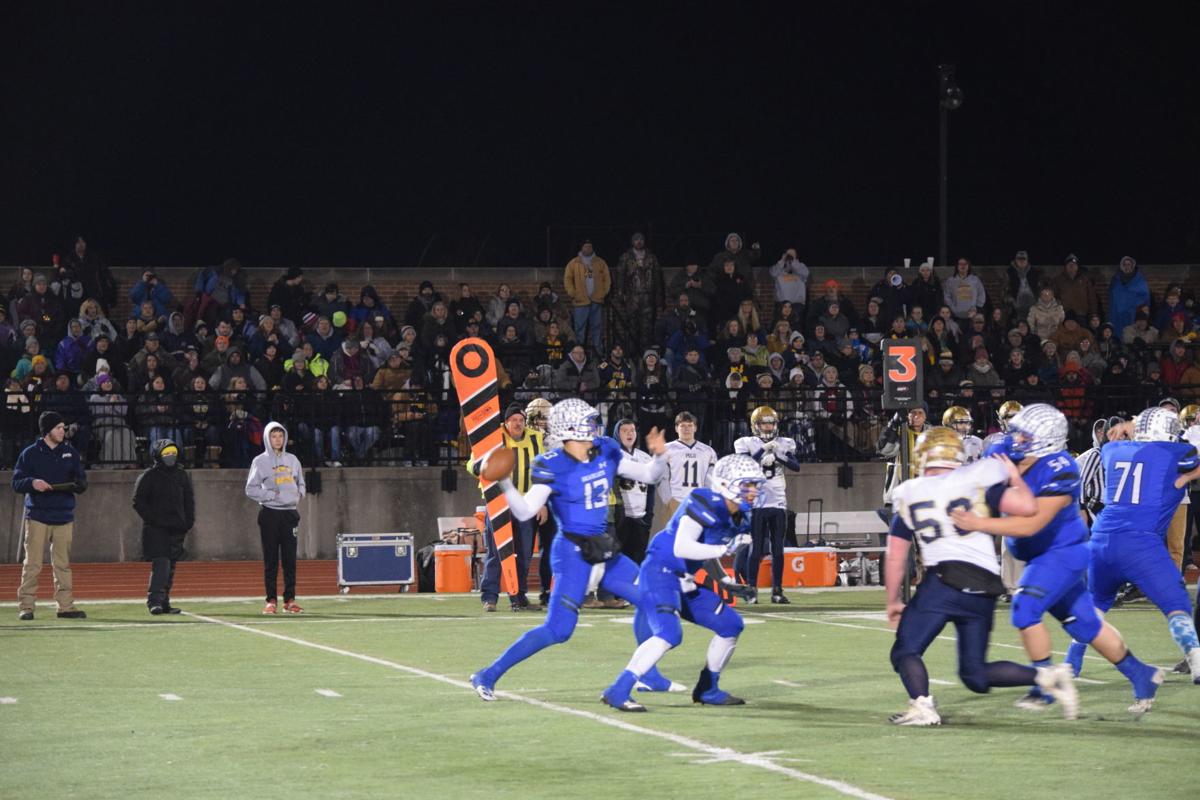 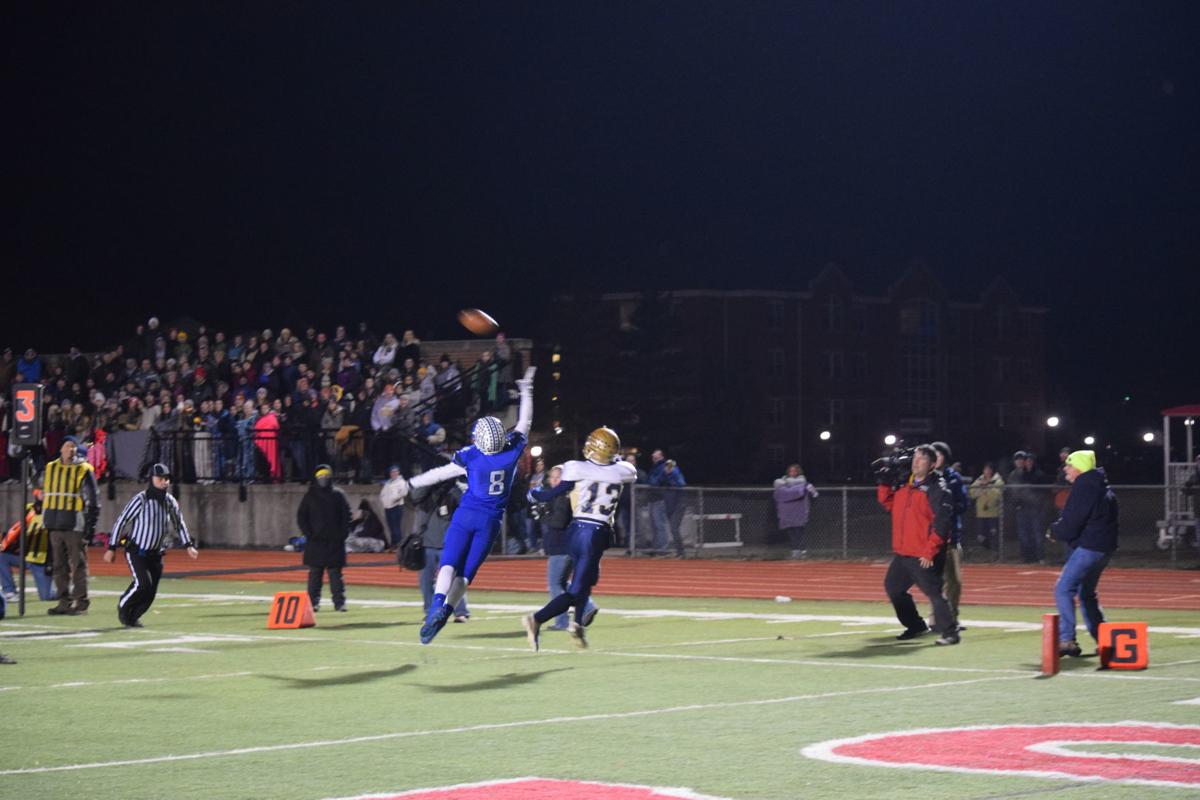 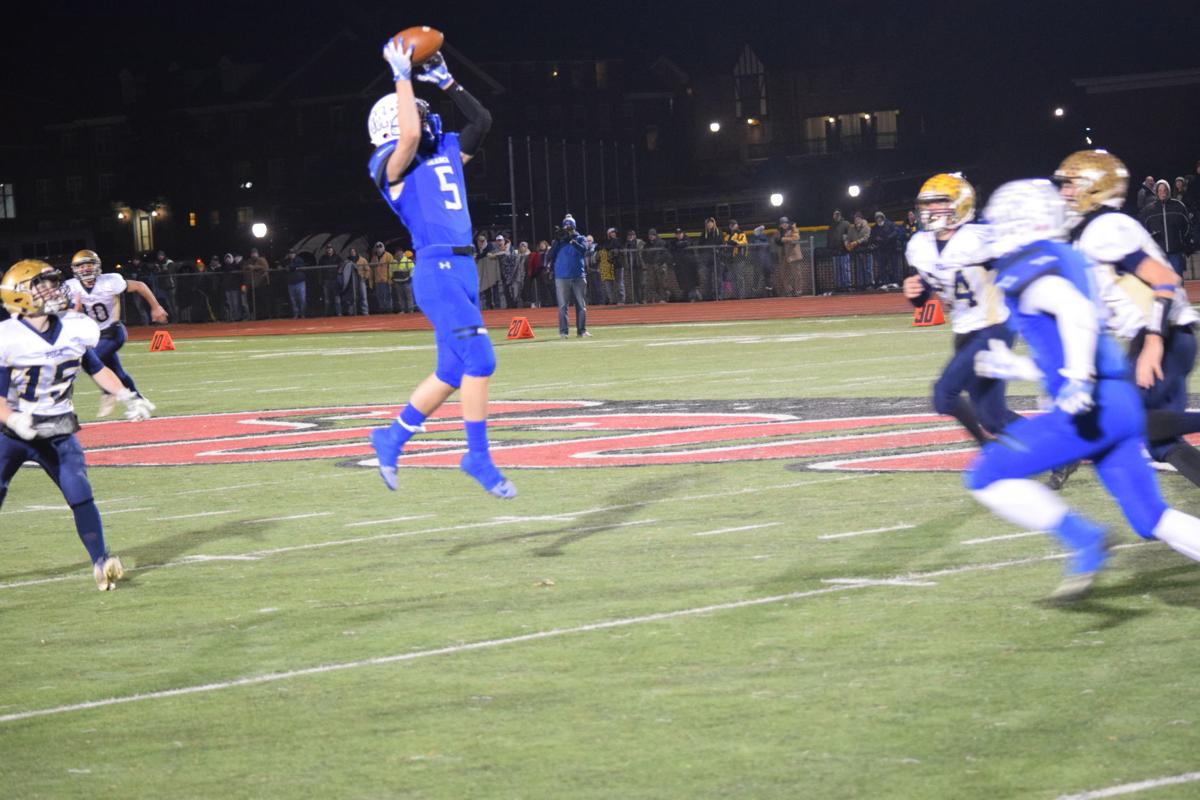 MCP’s Keegan Boyle (22) tries to pull in a pass against Polo Friday in the I8FA state championship game at Monmouth.

MONMOUTH — There has been two seasons of 8-man football in high schools in Illinois.

There has been a Milford-Cissna Park team in the state championship game both years.

The Bearcats won the title last year, but placed second this year with a 50-26 loss to Polo Friday at April Zorn Memorial Stadium.

“This was an unbelievable season and a great run for our guys,” MCP head coach Clint Schwartz said. “Minus the end result, it was really a great dream season for our guys, up until that scoreboard ran out of time. I’m really happy for our kids, our community and our program. It’s a good thing when you can be upset about getting second place.”

The Marcos of Polo took just four running plays on the opening drive to go 46 yards and score, then used 13 plays (12 runs) to go 86 yards for a 12-0 lead with 1 minute, 18 seconds remaining in the first quarter.

“We knew we wanted to run the ball and the clock,” Polo head coach Jeff Bumsted said. “That’s what we wanted to do and that’s the way it played out.”

MCP, which drove to the Polo 10 on its first drive with the help of a 48-yard reception by Keegan Boyle before turning it over on downs, scored on the first play from scrimmage of its second drive when Boyle ran down a 53-yard bomb from Penn Stoller to make it 12-6.

“We knew it was going to be a tough game and we just had to compete and focus and give it our all,” Stoller said. “We didn’t change anything, we just wanted to try

and score as much as we can.”

The Marcos answered with a two-play drive of 40 yards to make it 20-6 11 seconds into the second quarter.

An eight-play drive by the Bearcats ended in the end zone when Stoller caught a 35-yard TD pass on fourth-and-18 to make it a 20-12 deficit.

“The catches I made would not have happened without our offensive line,” Boyle said.

“Penn threw beautiful passes to me. It just happened that I went up and got them.

Our offensive line gave him the time to do it, to make those passes, so it was just a true team effort.” A 14-play 63-yard Marcos drive, all runs, took 9 minutes off of the clock, ending with just 52 seconds left before the half with the Marcos up 28-12.

“We thought we could run veer on them because of the way they put their ends on the outside,” Bumsted said.. “Our goal was to run the ball, then run it some more and eat clock because we did not want their offense to have the ball. Their offense is great, but we knew if they were not on the field they could not score.”

MCP used just five plays and 1:29 to take the opening drive of the second half 49 yards for a score. The touchdown was a 29-yard pass reception by Boyle.

“Keegan showed a lot of heart,” Schwartz said. “All season long, we liked it when we got one-on-one coverage with Keegan. As good of an athlete and football player as he is, he is a better teammate.”

Down 28-18 MCP recovered an onside kick, but fumbled it away four plays later. Polo then went on a 14-play scoring drive, picking up two crucial fourth downs, for a 34-18 lead.

“Not letting the momentum get away from us was huge,” Bumsted said. “When they fumbled and we got it from them, that was huge because they were going to score on that drive.”

MCP used a trick play on its next posession that picked up nearly 20 yards, but fumbled at the end of it.

“There were a couple big plays that we messed up on and I think throughout the ballgame it was 50-50 either way,” Boyle said. “We gave it everything. They just came out on top because they’re a heck of a football team. It just did not work out like we wanted it to work out.”

“Turnovers suck,” Schwartz said. “Ball security in big-time games, that’s what it comes down to. It doesn’t matter what level of football a team is playing, turnovers are going to make a difference.”

Boyle tried his best to make a difference, catching his fourth aerial TD with a spectacular grab and a toe touch in the back corner of the end zone to cap a six-play 76-yard drive. With 10:36 left in the game, MCP was within two scores at 42-26.

“We do a lot of the one on one in practice, just messing around sometimes,” Boyle said. “I guess...it was some of that that helped me make that catch.”

“Keegan played great because some of those catches were amazing,” Stoller said. “I just put the ball up and he went and made spectacular catches.”

Boyle caught seven passes for 156 yards and four TDs. Stoller was 9 of 19 passing for 193 passes. He threw an interception on MCP’s final play.

Polo’s Jace Coffey rushed 19 times for 192 yards, threw a pass for a first down and caught a touchdown pass.

“They made plays when they needed to make plays,” Schwartz said. “Polo is a good football team and sometimes you just run into those kind of teams and there’s not much you can do about it. We knew we were going to be in a dogfight. The scoreboard doesn’t define who we are, doesn’t define our season for us. You can what-if it all day long. I’m not going to do that. We played hard, they played hard. They deserve it.

“Our kids as freshmen and sophomores took some beatings, so we have come a long way as a program and as a community. They will look back later on and smile about it and have a good time with it.”

“It’s sad to know all the memories we have made and that football is over for most of us,” Stoller said. “I would’ve like to finish number one but we had a great year and I’m really proud of all my teammates.”

A wintry mix this evening will transition to mainly rain overnight. Low 29F. Winds SSE at 15 to 25 mph. Chance of precip 100%. Snow and ice accumulating 1 to 3 inches.