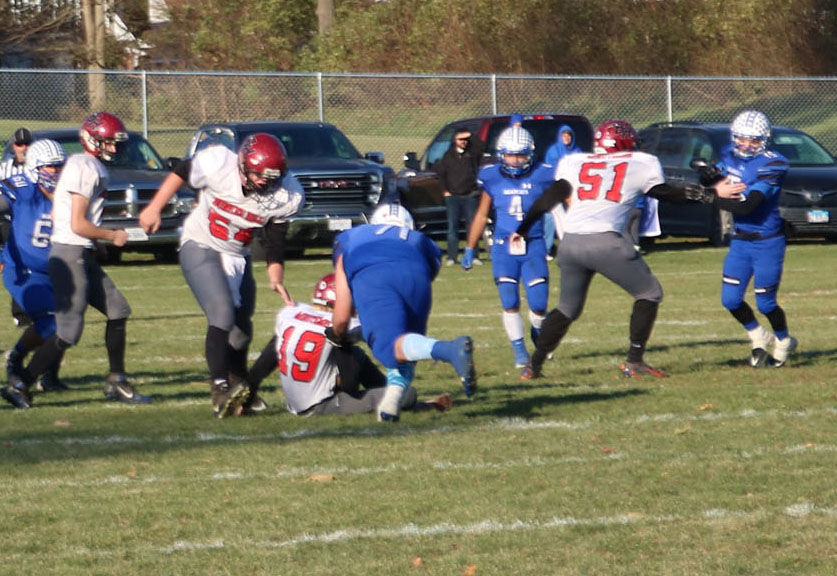 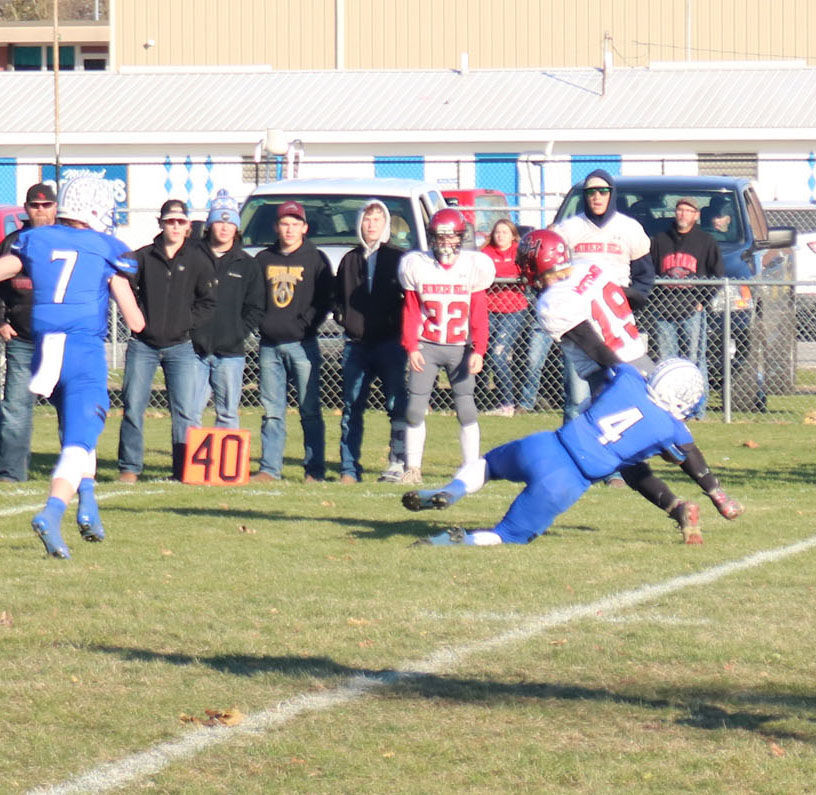 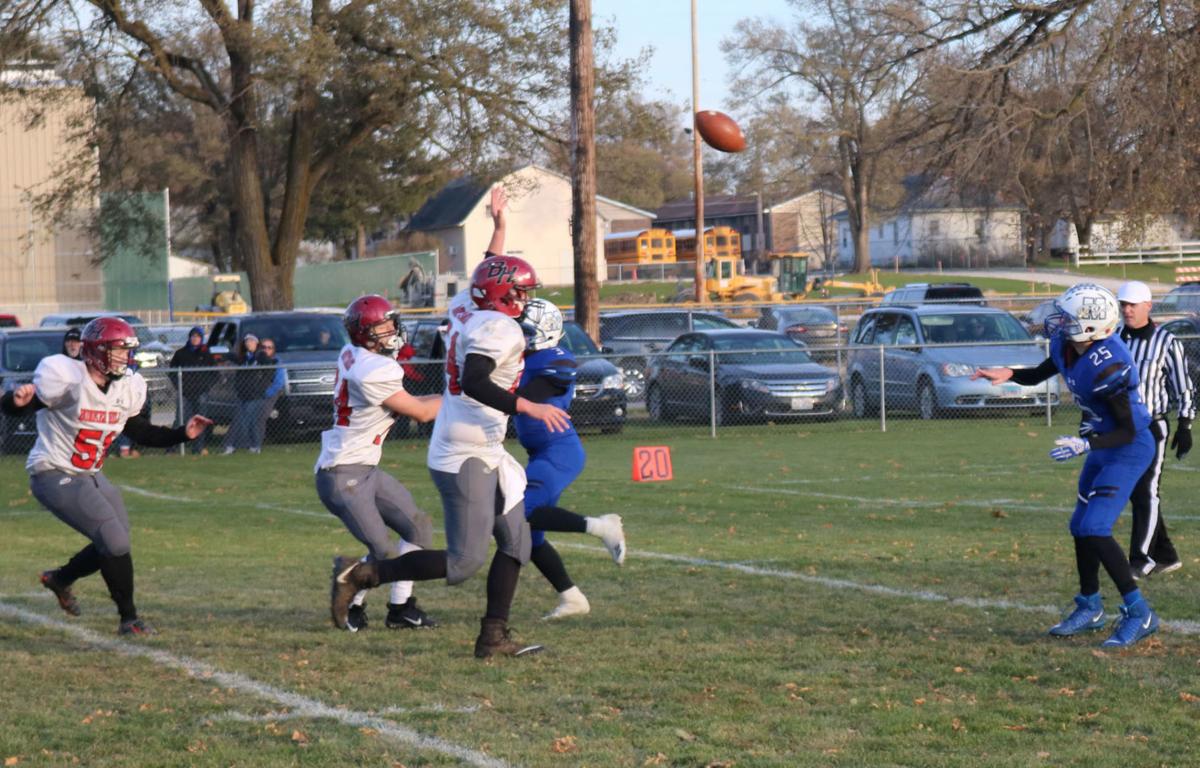 Bearcat Sawyer Laffoon gets off a pass before Minutemen defenders get to him. 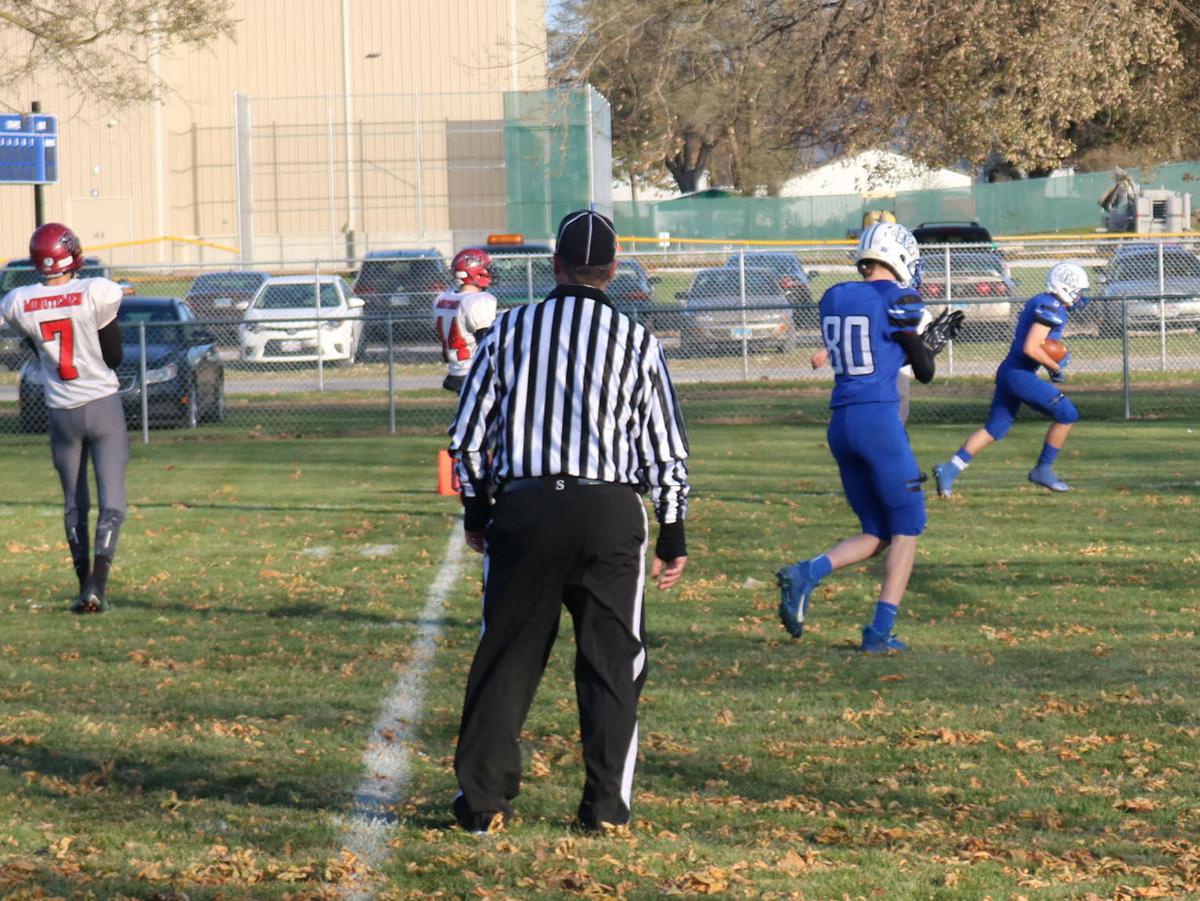 Bearcat Penn Stoller outpaces Bunker Hill Minutemen, scoring one of his touchdowns in the second quarter Saturday afternoon on the team’s home field.

Bearcat Sawyer Laffoon gets off a pass before Minutemen defenders get to him.

Bearcat Penn Stoller outpaces Bunker Hill Minutemen, scoring one of his touchdowns in the second quarter Saturday afternoon on the team’s home field.

Eight-man football playoff games will continue for the Milford/Cissna Park Bearcats after Saturday’s game against the Bunker Hill Minutemen. The Bearcats had a 62-6 victory at home.

“The guys are extremely excited to be back in the semi finals,” said Bearcats head coach Clint Schwartz. “It means a lot when you have a group of really good kids; they’re really good kids who happen to be good at football. They’re good academically and out of school.”

Schwartz said his team did a good job staying focused, especially as the team had a bye week last week.

After last week’s bye week, the team came onto the field ready to play, and to score points.

In the first minutes of the game, the Minutemen fumbled the ball before reaching the 50-yard line. The Bearcats recovered it and at the 7:36 mark Penn Stoller ran the ball into the end zone at the six-yard line, scoring the first of his touchdowns. Rudy King got the two extra points and the Bearcats were on the board, leading for the rest of the game.

Not long later the Minutemen got an illegal procedure call that comes with a five yard penalty. The ball was around the 40-yard line. They got the ball to the Bearcats’ 30 before a 10-yard walk off from the spot of the fumble taking the ball back to near the Minutemen’ 20-yard line.

It was fourth and long just outside the Bearcats’ goal line, and the Minutemen took the safety giving the Bearcats two more points.

With five minutes left in the quarter the Bearcats earned their own points again. Stoller threw a 47-yard pass to Keegan Boyle. No extra points were earned with the TD and the score was 16-0.

The Bearcats punted with a Minuteman receiving at the 16-yard line. Tanner Garrison made the tackle at the 41-yard line. The Minutemen couldn’t score on the possession, and the Bearcats’ Stoller received the ball at the team’s 46-yard line.

With less than two minutes left in the quarter, Stoller ran the ball 20 yards into the end zone. Next, he would pass the ball to Boyle for two extra points. The score was 24-0.

The duo wasn’t done yet in the quarter.

At the beginning of the second quarter, there were two big sacks with King and Allen both taking down Minuteman Coy Sellars.

At the nine minute mark Stoller received a Minuteman punt and ran the ball nearly the whole length of the field. Before making it to the end zone for a touchdown, the Bearcats got called for an illegal block.

On the next play Angel Salinas ran the ball 90 yards earning the touchdown. No extra point was earned and the score was at 38-0.

In the Minutemen’s next possession, Barney would go on to recover a Minutemen fumble at the 30-yard line.

The Bearcats would take the ball down the field, and at the seven minute mark, Allen caught a 25-yard pass for a touchdown. Stoller would earn the two extra points.

The score was 46-0. At this point, the coaches and refs decided to keep the game’s clock running.

With the Bearcats putting so many points on the board so early, Schwartz said this allowed the team’s second group of players to get a lot of playing time.

Before the end of the quarter Barney would recover another Minuteman fumble, this time at opponent’s 20-yard line.

The Bearcats put in quarterback Bryce Sluis. He’d have a fumble and get sacked before finding his groove.

With about two minutes left of the quarter, he’d find Kaeb to pass to and the Bearcats would have another touchdown. For the extra points, the Minutemen got called for pass interference on the first play. On the second play Nick Warren ran the ball in for two points.

The third quarter saw both teams scoring. For both teams it was the last of the points that would be put on the board.

“Defensively, we did a great job,” Schwartz said, noting they didn’t let the Minutemen score any points on them. Their lone touchdown came from a Bearcat fumble.

The Bearcats put the last points on the board.

Warren ran 65 yards on a screen pass when the clock had 4:40 left. Mason Blanck got the two-point conversion.

The next game will be a home game for the Bearcats against the Flanagan Cornell-Woodland Falcons. It was unknown as of presstime if the game would be Friday or Saturday, said Schwartz.

Rain likely. Temps nearly steady in the mid 30s. Winds ESE at 5 to 10 mph. Chance of rain 80%. Rainfall around a quarter of an inch.