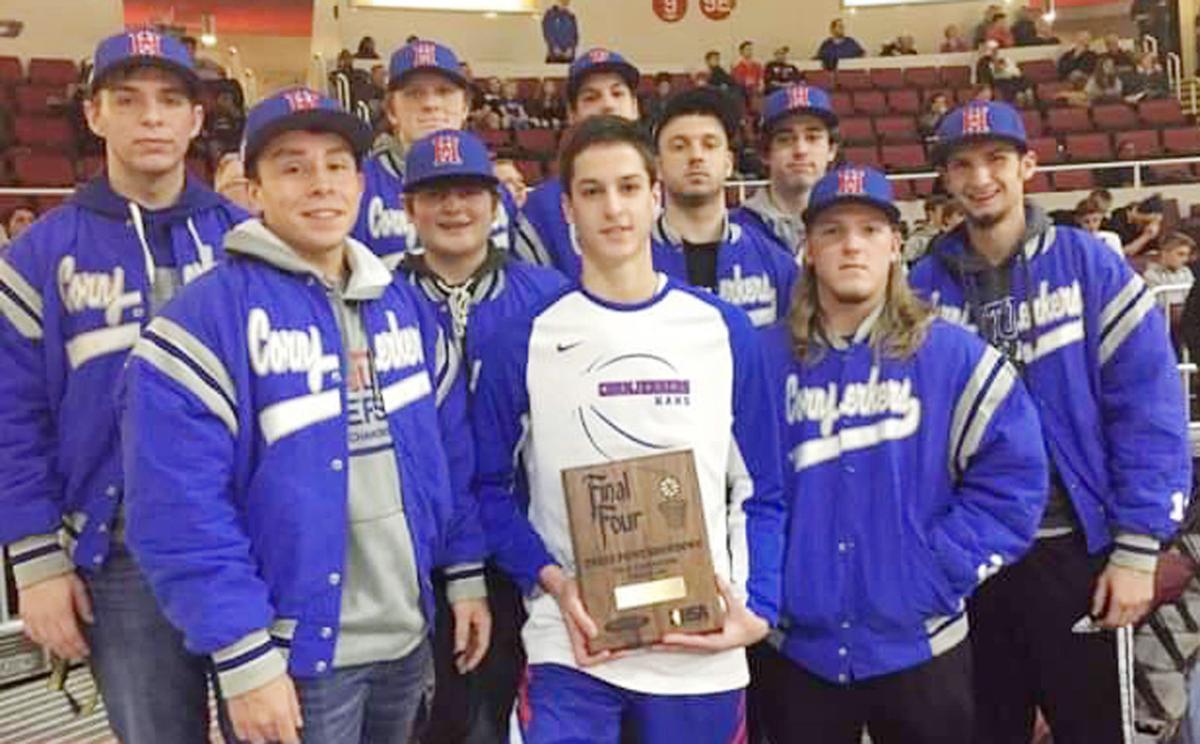 Members of the Hoopeston Area High School baseball team gather around their teammate Graham Eighner at the Peoria Civic Center after Eighner won the Class 2A state three-point showdown. 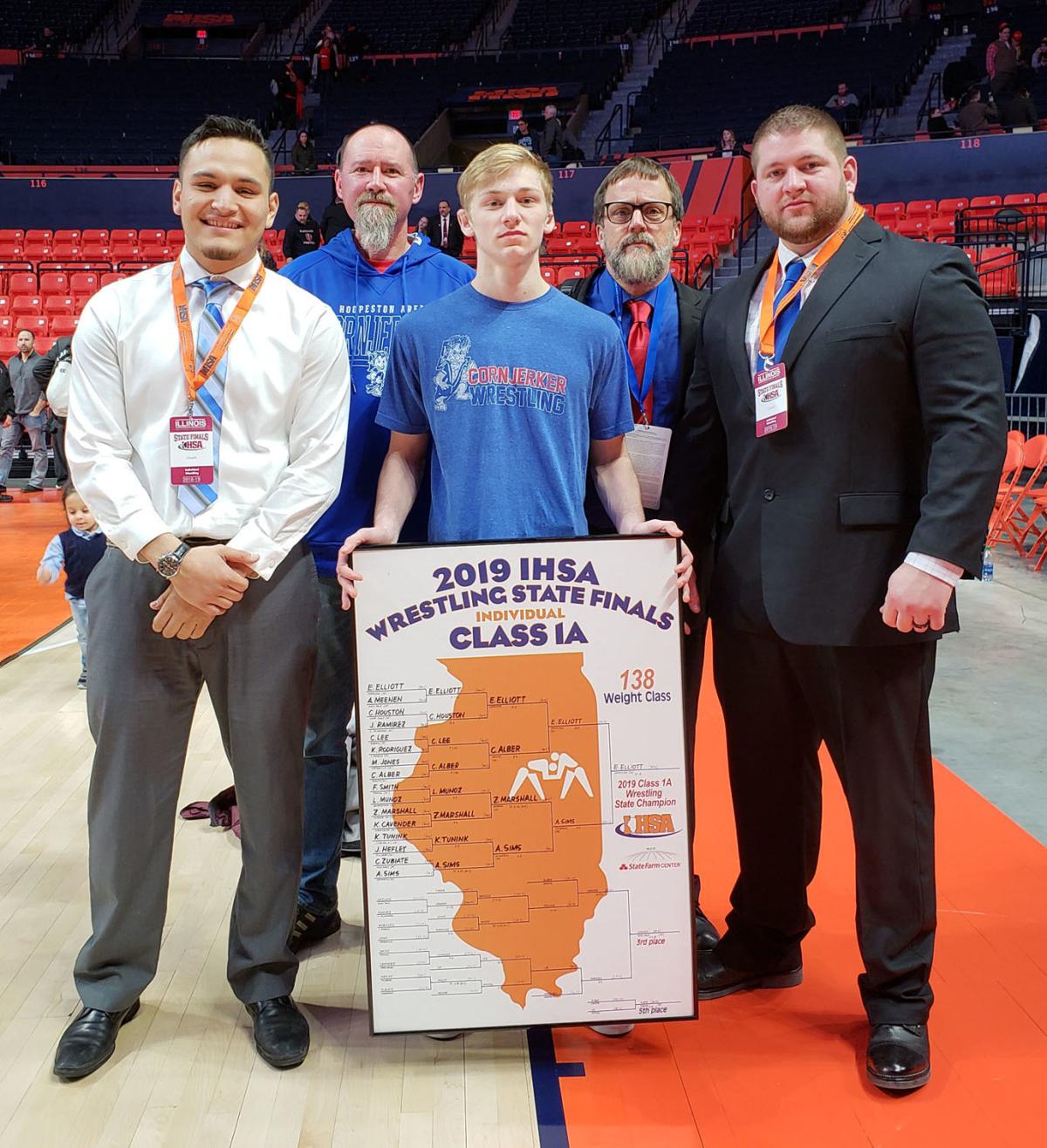 Ezra Elliott stands with his coaches after taking first place at the IHSA state wrestling finals in 2019. 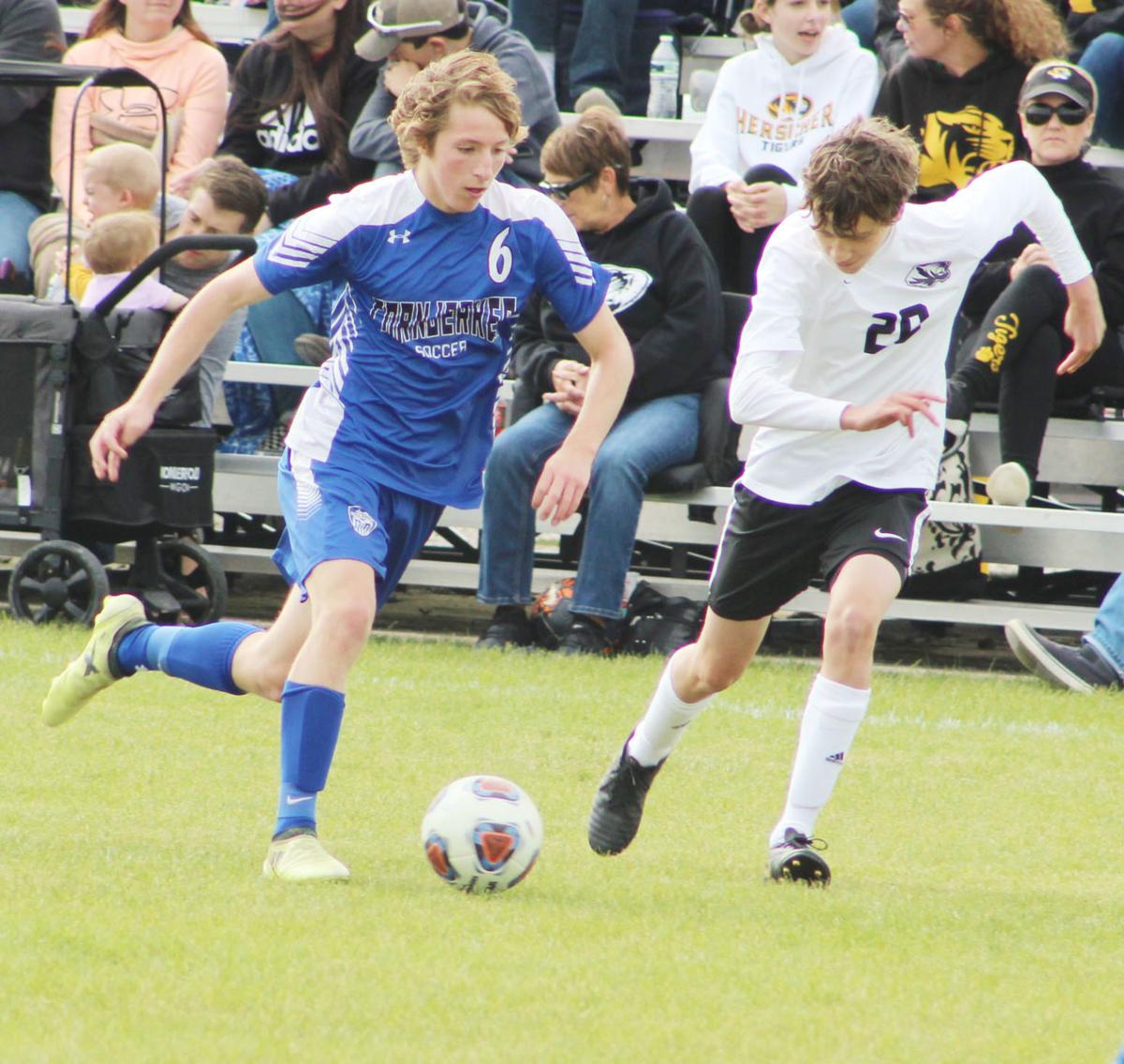 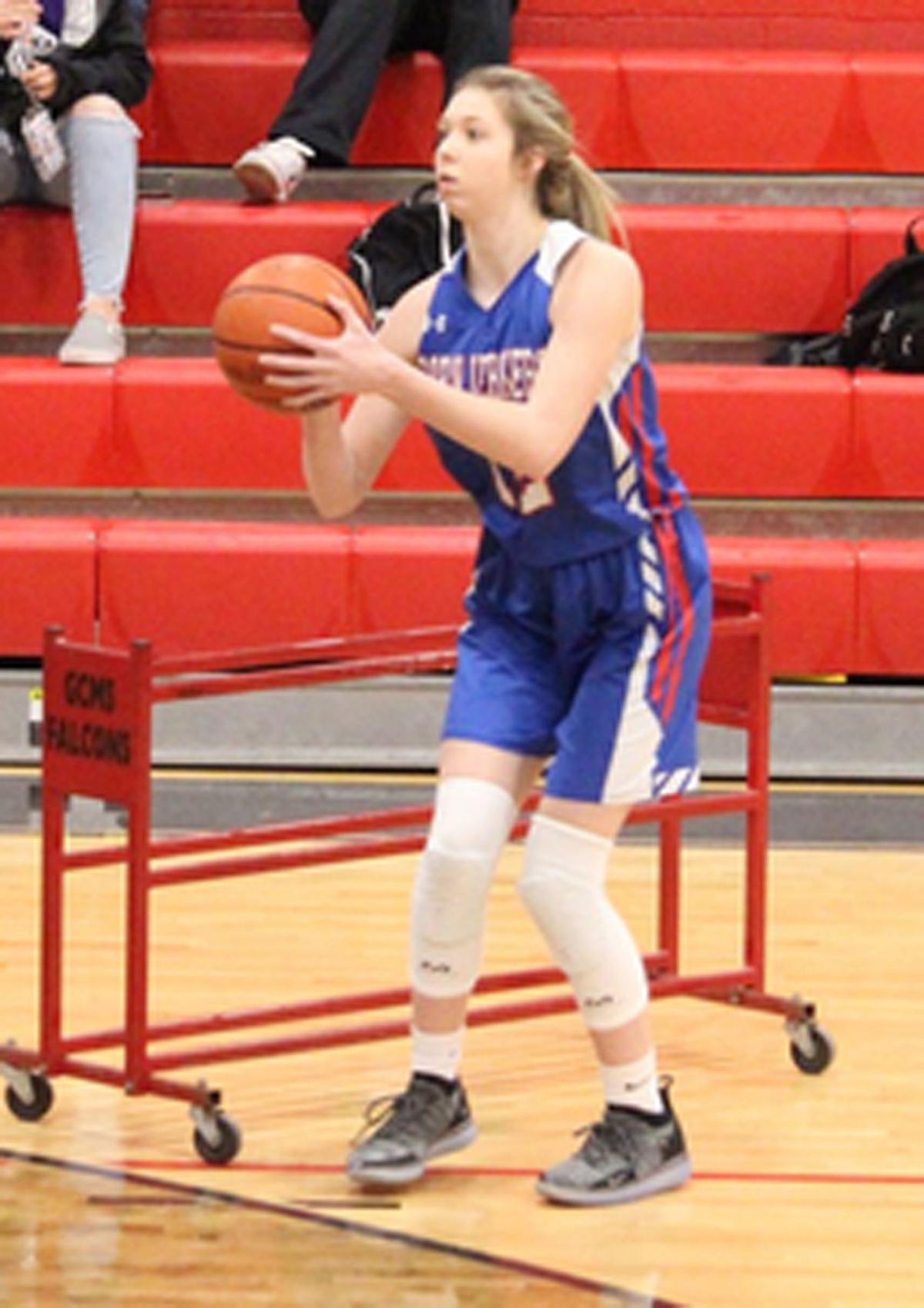 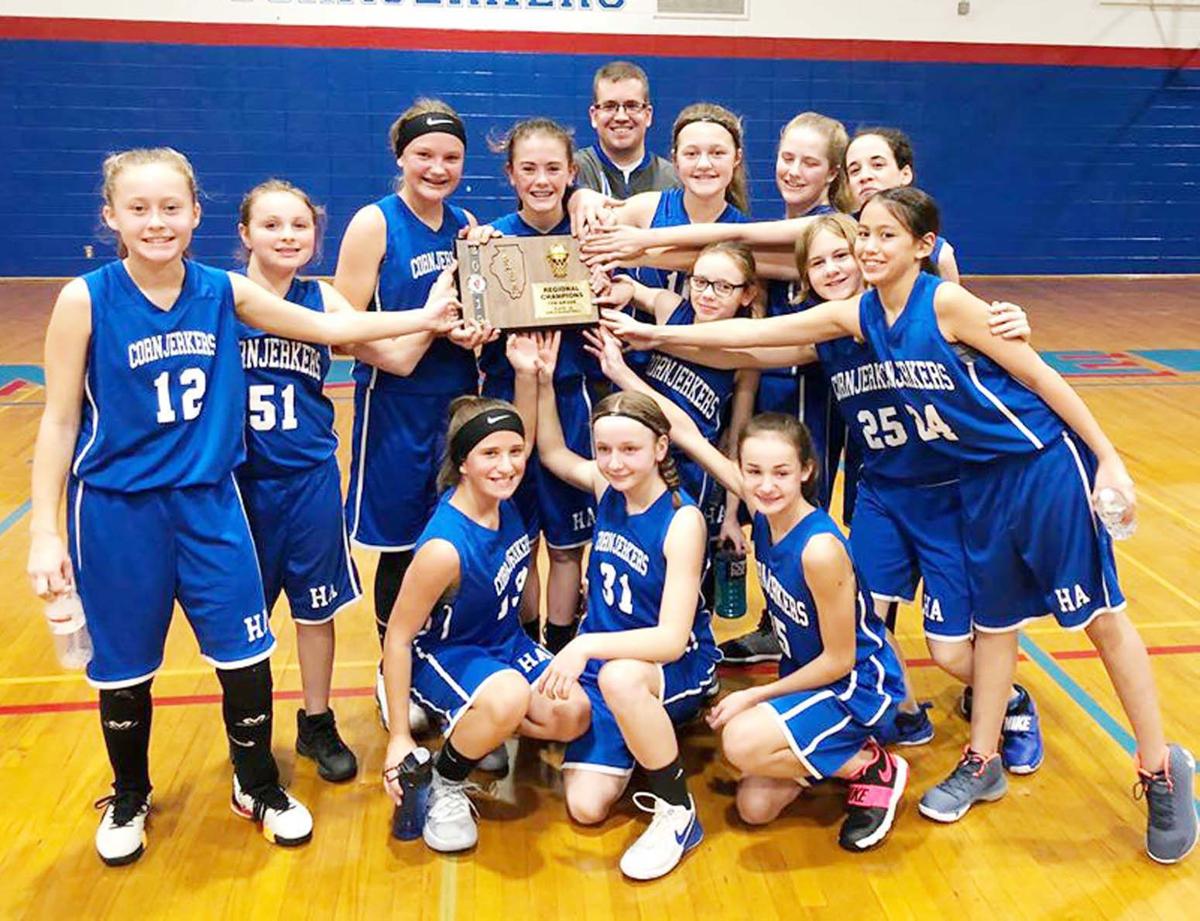 Members of the Hoopeston Area High School baseball team gather around their teammate Graham Eighner at the Peoria Civic Center after Eighner won the Class 2A state three-point showdown.

Ezra Elliott stands with his coaches after taking first place at the IHSA state wrestling finals in 2019.

Hoopeston Area School District saw many achievements in sports in 2019.

An early achievement in 2019 was the success of the Hoopeston Area High School Lady Cornjerkers bowling team.

As has been the case for the last few years, Hoopeston Area saw several wrestlers advance in postseason competition this year.

Elliott and the Colungas would reach the state finals and advanced from the first round with wins under their belts. Abel Colunga and Anthony Colunga would fall in the second round of competition.

Elliott was no stranger to this level of competition, having reached the state finals previously. This year was his triumphant return to the top stage and he wasn’t leaving without a first place win.

Elliott, who went undefeated during the season, wrestled his way to victory and won first place in the 138 pounds weight division at the state finals.

Mason Swartz, 9, of Hoopeston, earned first place in his weight division in the Illinois Midget wrestling championships March 16-17 at the David S. Palmer Arena in Danville.

Ali Watson advanced to the IHSA state three-point contest preliminaries but fell short of moving onto the finals.

Eighner was cheered on by family, friends and teammates from the Hoopeston Area High School baseball team who traveled to Peoria to support him.

Hoopeston Area High School’s soccer team had a reinvigorated spirit heading into this season and it showed in the season record of 21-5-1. The Cornjerkers were undefeated for much of the season.

Unfortunately, the Cornjerkers were unable to advance in the postseason past the regional championship, falling to Herscher after defeating St. Anne in the first round of regionals. Hoopeston Area, missing a few of its talented players, couldn’t stand up to Herscher’s offense and fell 6-0.

Allison Pickett took second place in the Vermilion Valley Conference meet, earning all conference honors in the process, and would go on to advance to sectionals after placing 38th with a time of 21:19:34 at regionals.

Michael Helmuth placed sixth at the VVC meet and earned all conference honors. Helmuth also advanced to sectionals, placing 47th with a time of 18:49:63.

Hoopeston Area kept pace with Beecher in the first quarter, but Beecher pulled away in the second and went into halftime with a 12-7 lead.

The Lady Cornjerkers attempted to keep pace with Beecher in the third quarter, but couldn’t pull ahead. Beecher focused on maintaining control of the ball and running down the clock, denying Hoopeston Area the chance to climb out of the hole they got into in the first half. Hoopeston Area didn’t let up, however, and continued to push for the basket. Unfortunately, the Lady Cornjerkers were unable to convert many of their attempts into points.