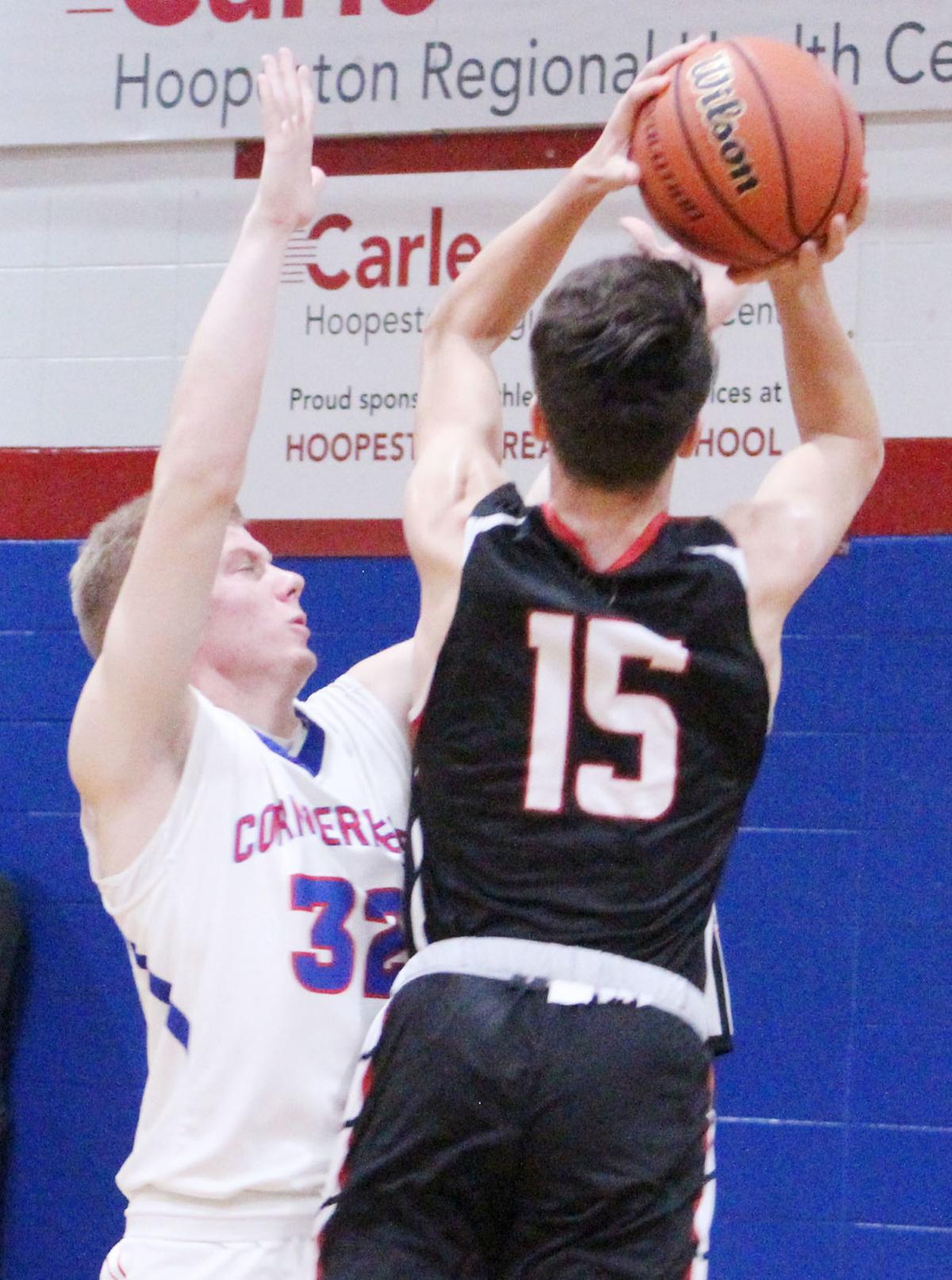 GCMS’s Ethan Garard goes up for a shot over Hoopeston Area’s Josh Delfino during Saturday’s game in Hoopeston. 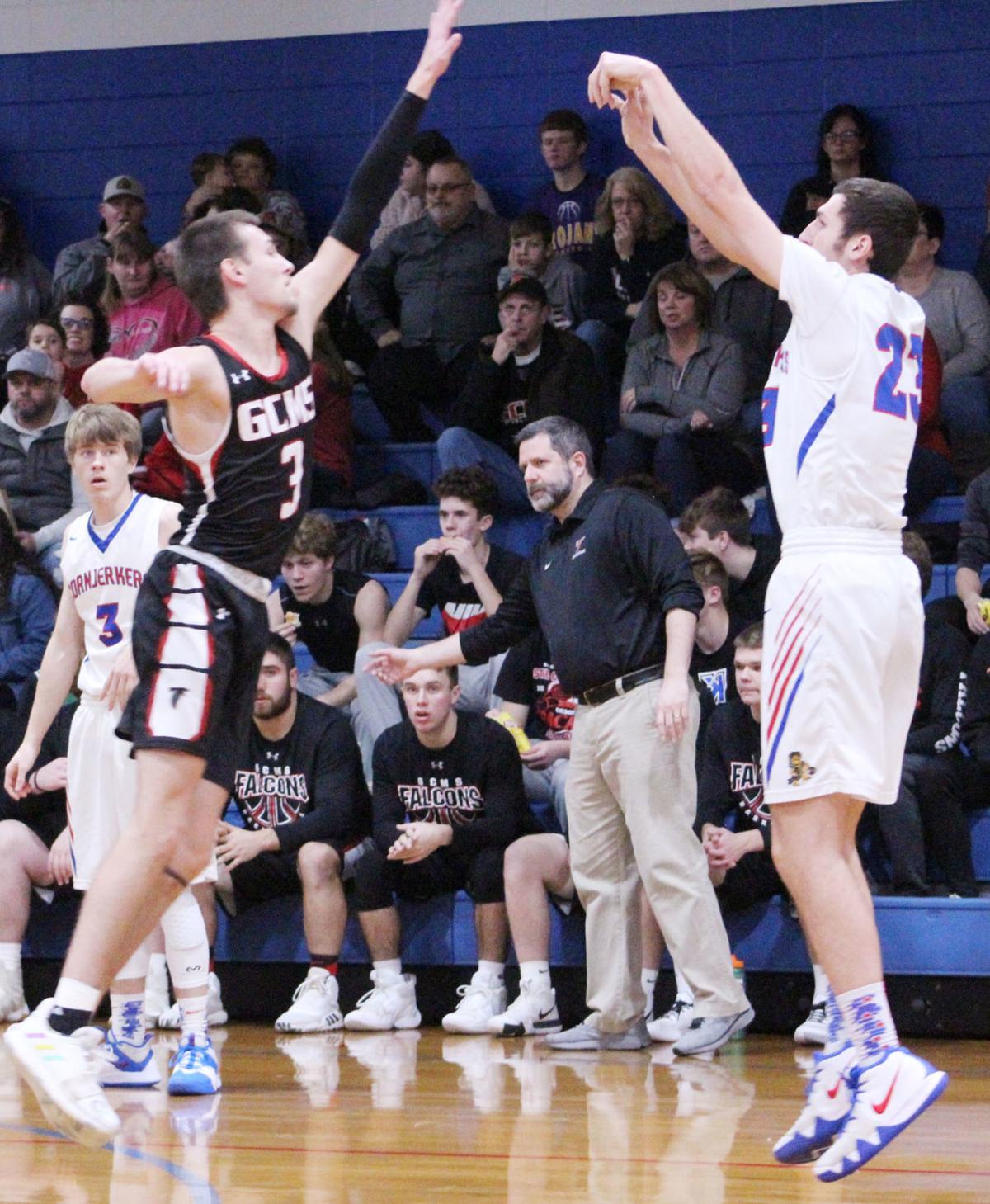 GCMS’s Tanner Cribbett goes up for a block against Hoopeston Area’s Lucas Hofer during Saturday’s game in Hoopeston.

GCMS’s Ethan Garard goes up for a shot over Hoopeston Area’s Josh Delfino during Saturday’s game in Hoopeston.

GCMS’s Tanner Cribbett goes up for a block against Hoopeston Area’s Lucas Hofer during Saturday’s game in Hoopeston.

GCMS would regain the lead at the two-minute mark for the quarter and didn’t let their foot off the gas until the buzzer sounded for halftime. A last second buzzer-beater three-pointer from GCMS’s Nathan Kallal would put GCMS ahead 29-24 going into the half.

Roesch continued to lead the Falcons in scoring in the second quarter with seven points. Garard had six points in the quarter, Kallal had three and Jordan Lee had two.

Gonzalez and Berlin each put up three points for Hoopeston Area in the second quarter. Hofer scored two free throws during the quarter.

Both teams came out of half-time ready to play, though it took a few minutes for either team to score again, but when they did, the floodgates opened.

GCMS and Hoopeston Area would trade leads several times during the quarter and there was even a brief moment of dueling three-point shots as Berlin hit a three-pointer and Elliott responded with one of his own followed by another by Delfino in straight possessions.

Berlin ended the quarter with eight points. Hoopeston Area’s Cameron Flint had six points during the third quarter, followed by Delfino with five points and Hofer with two.

Elliott led GCMS in scoring for the third quarter with five points, followed by Cribbett with four, Roesch with three and Garard and Kallal with two.

Both teams went into the fourth quarter tied at 45.

GCMS hit their stride in the fourth quarter and managed to pull ahead of Hoopeston Area and held that lead into the final minute or so of the quarter.

Hoopeston Area bided their time and hit a field goal to pull ahead 56-55.

Hofer hit two clutch free-throws with under a minute remaining to increase Hoopeston Area’s lead to 58-55.

GCMS needed a three-pointer to tie, but they were unable to convert their shots successfully.

A final free throw shot from Delfino put the Cornjerkers up 59-55 and that was the final score for the game.

Roesch led the Falcons in scoring for the game with 15 points total. Elliott had 12 points total. Cribbett and Garard each had eight points. Kallal had five points, Spencer Meenen had three points and Minion and Alex Meece each had two points.

Berlin led the Cornjerkers in scoring with 15 points, followed closely by Hofer with 14 points, Flint and Delfino with 12 points and Gonzalez with six points.

Hoopeston Area will take on Milford at home at 6 p.m. Tuesday and will host Robinson at 6 p.m. Friday before heading to Danville to compete at the Vermilion County Tournament at 3:45 p.m. against Westville Saturday at the David S. Palmer Arena.

The Lady Cornjerkers started their week with a big win over Georgetown Jan. 6.

Ali Watson put up 18 points and 11 rebounds while Lexie Breymeyer had 17 points and five steals.

The Lady Cornjerkers came up just short in their next outing Jan. 7 against Monticello.

Watson had 14 points and eight rebounds. Adasyn Jones had 12 points during the game.

Hoopeston Area had another close match on Thursday, facing off against Salt Fork.

Watson had 14 points and eight rebounds, while Jones put up 10 points during the game.

Hoopeston Area regrouped and found their footing again in their final match of the week Saturday against Cissna Park.

Watson scored 21 points and had 12 rebounds while Lexie Breymeyer had 13 points.

Hoopeston Area took on Oakwood Monday and is set to travel to Chrisman at 6 p.m. Thursday and will start competition at the Vermilion County Tournament Saturday at 10:30 a.m. against Armstrong-Potomac at the David S. Palmer Arena in Danville.