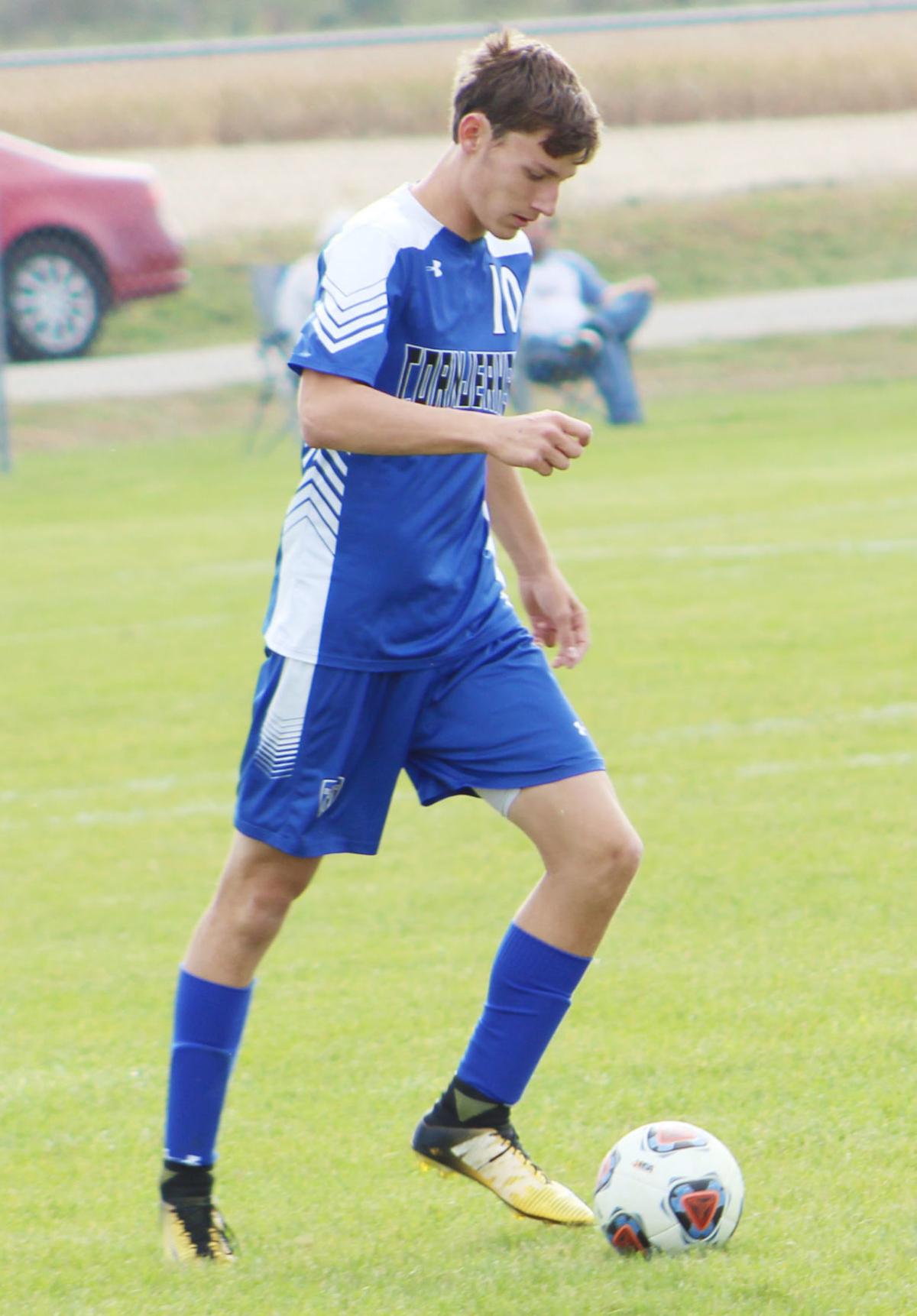 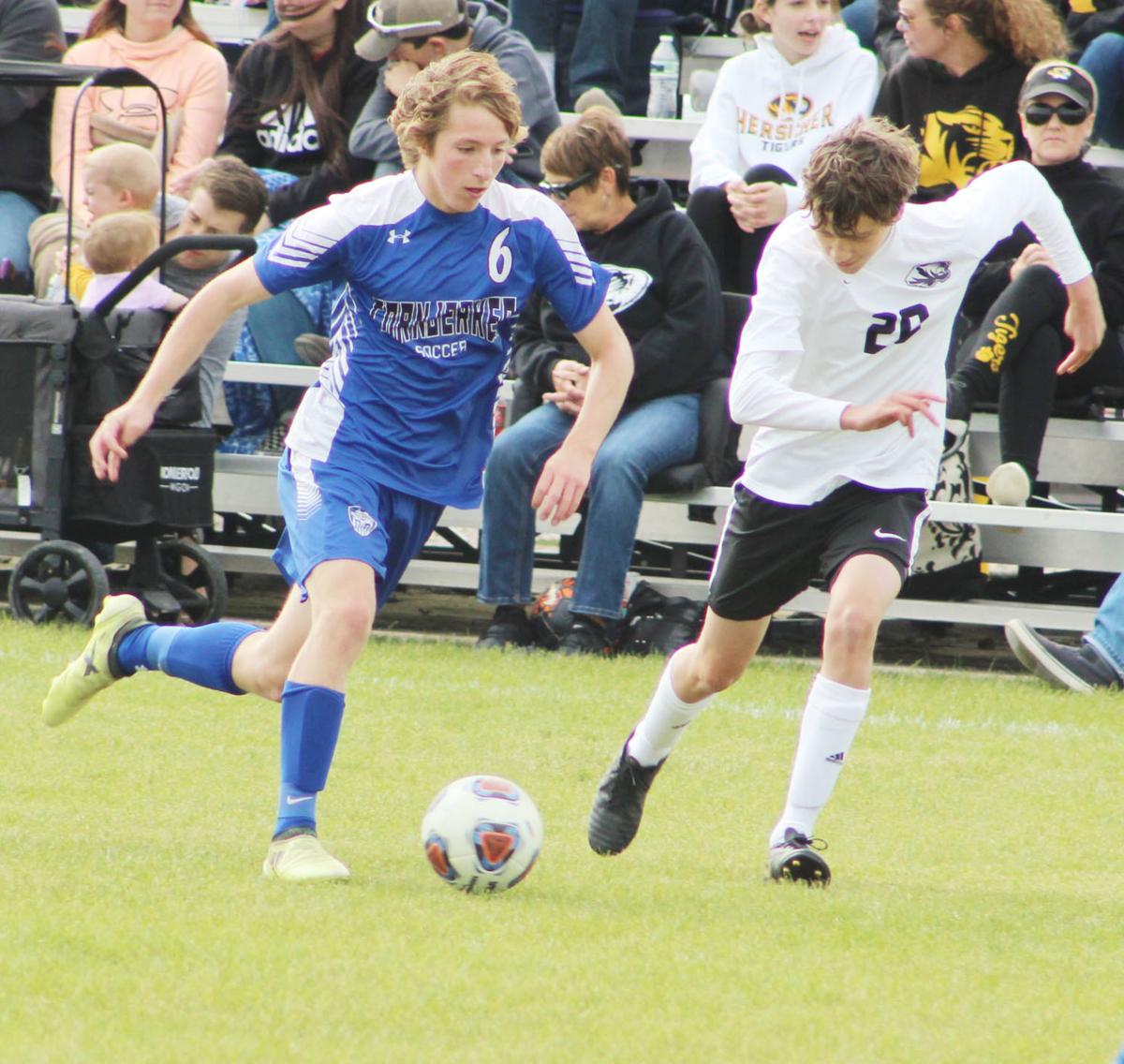 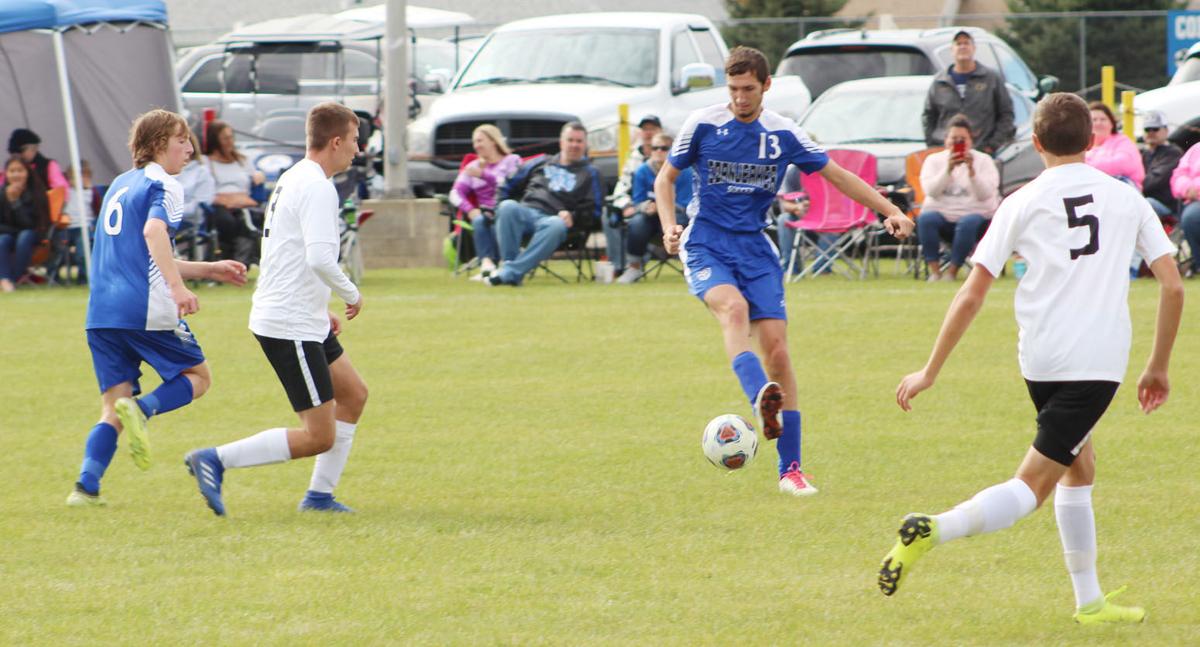 Hoopeston Area’s Neil Williams (left) and Lucas Hofer (right) get themselves in position for a shot on goal against Herscher at Saturday’s regional championship game.

Hoopeston Area’s Neil Williams (left) and Lucas Hofer (right) get themselves in position for a shot on goal against Herscher at Saturday’s regional championship game.

Neil Williams got the Cornjerkers on the board with 28 minutes left in the first half and less than a minute later Ben Brown was able to score on a rebound to make it 2-0 Cornjerkers.

Isaias Diaz made it 3-0 when was able to bend his corner kick into the goal. At the 13:29 mark Lucas Hofer crashed the goal hard and was able to head the ball just past the St. Anne goalie to make it 4-0. Josh Delfino rounded out the first half scoring to make it 5-0 at half.

St. Anne came out in the second half attacking the Cornjerkers and with 26 minutes plus on the clock the Raul Guerrero scored his 45th goal of the year to cut the deficit to 5-1.

The Cornjerker defense then tightened things up and with six minutes to go in the game Neil Williams was able to take a pass from Josh Delfino to score his second goal of the night. Isaias Diaz finished off the Cornjerker scoring when he scored the final goal on a corner kick that hit off a St. Anne defensive player to make the final score 7-1. Payton Berlin was the winning goalie stopping six of the seven shots on the night.

Hoopeston Area advanced to the regional championship Saturday against Herscher.

The Cornjerkers lost to Herscher in the IHSA regional championship game by the score of 6-0.

Herscher scored 17 minutes in the first half by Logan Lunsford. Less than a minute Bascom Jackson was able to find Jace Martin running to make the score 2-0 at half

Second half was all Herscher as Bascom Jackson, Lucas Schejbal, Jacob Schultz Milford Nelson put the finishing touch on the game. Herscher will move on to Braidwood (Reed Custer) Sectional.

The Cornjerkers finished their season with a record of 21-5-1.

The Cornjerker Seniors finish their high school career with a record of 54-35-3 with a junior/senior year record of 36-10-2.

Rain showers early mixing with snow showers later in the day. Temps nearly steady in the mid to upper 30s. Winds SSW at 5 to 10 mph. Chance of precip 60%.

Cloudy with snow showers in the evening and steady snow likely after midnight. Some rain may mix in early. Low 31F. Winds WSW at 10 to 15 mph. Chance of snow 80%. Snow accumulating 1 to 3 inches.

Variably cloudy with snow showers. Temps nearly steady in the low to mid 30s. Winds W at 10 to 20 mph. Chance of snow 70%. About one inch of snow expected.