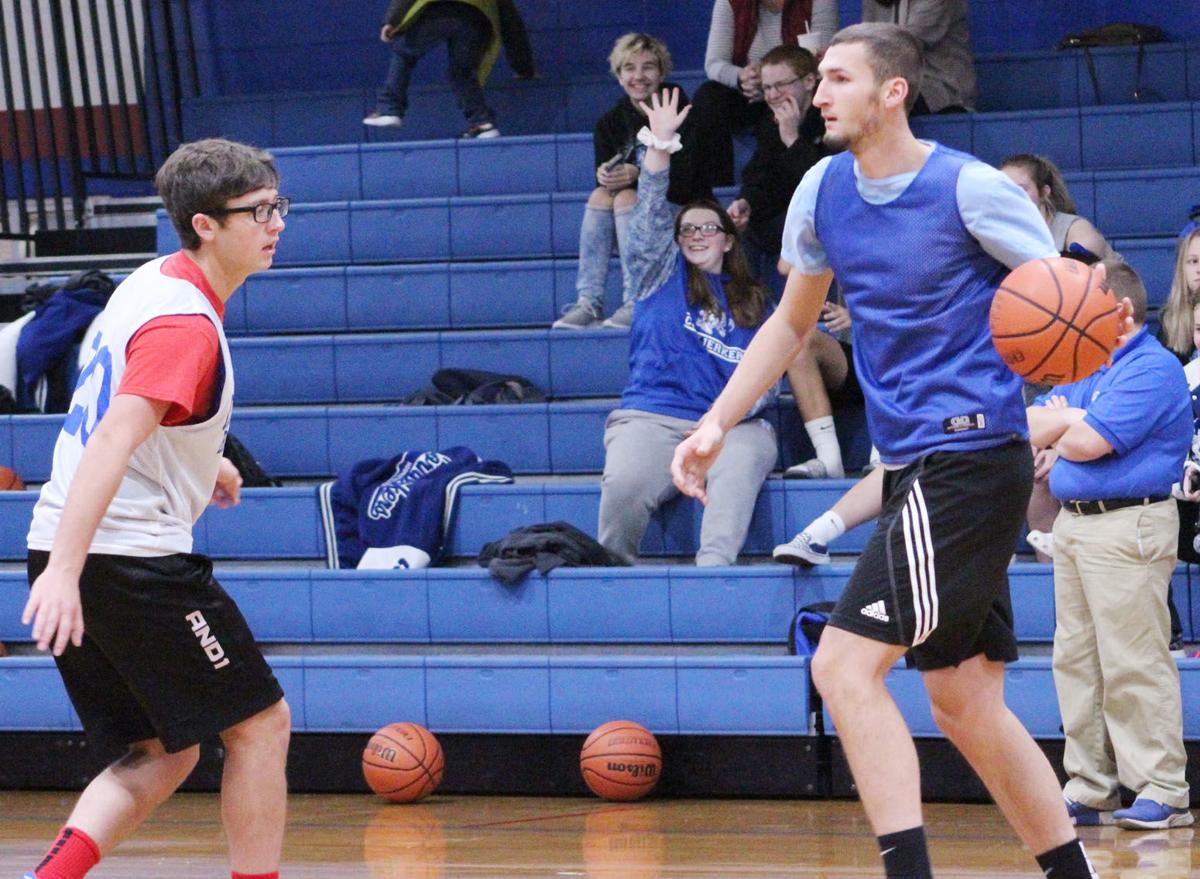 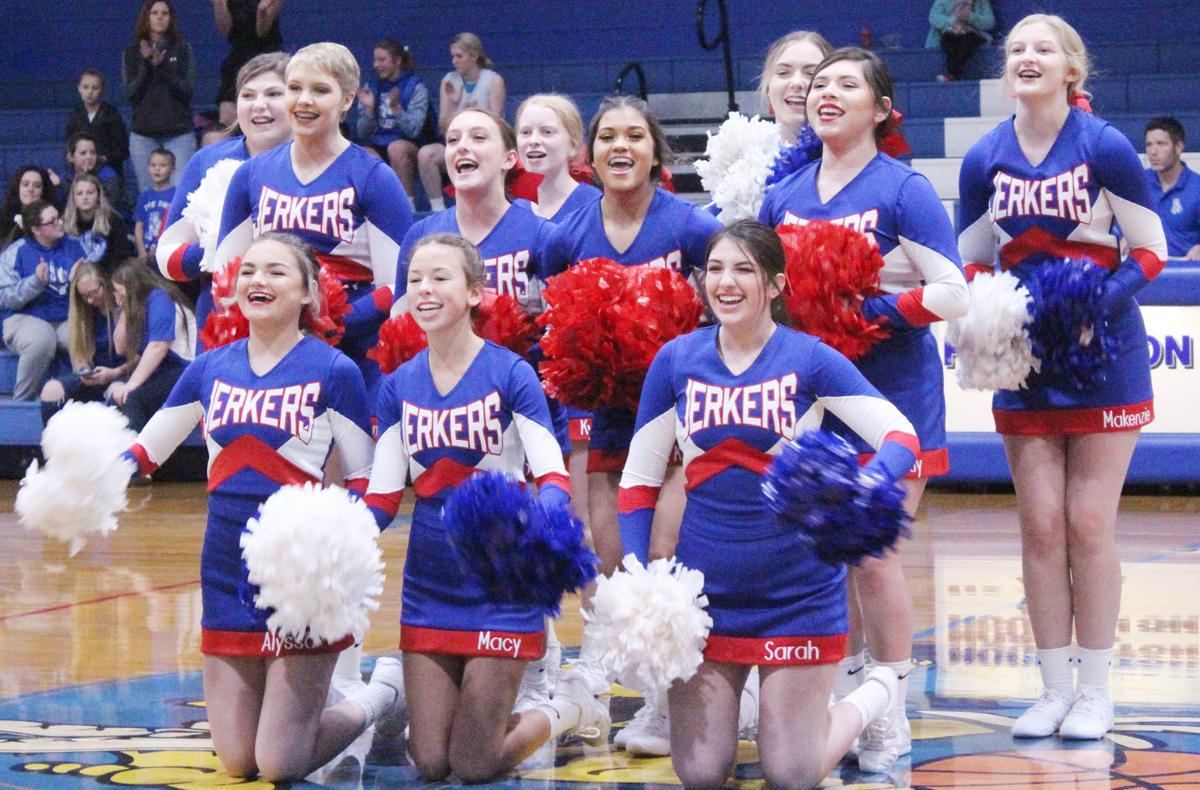 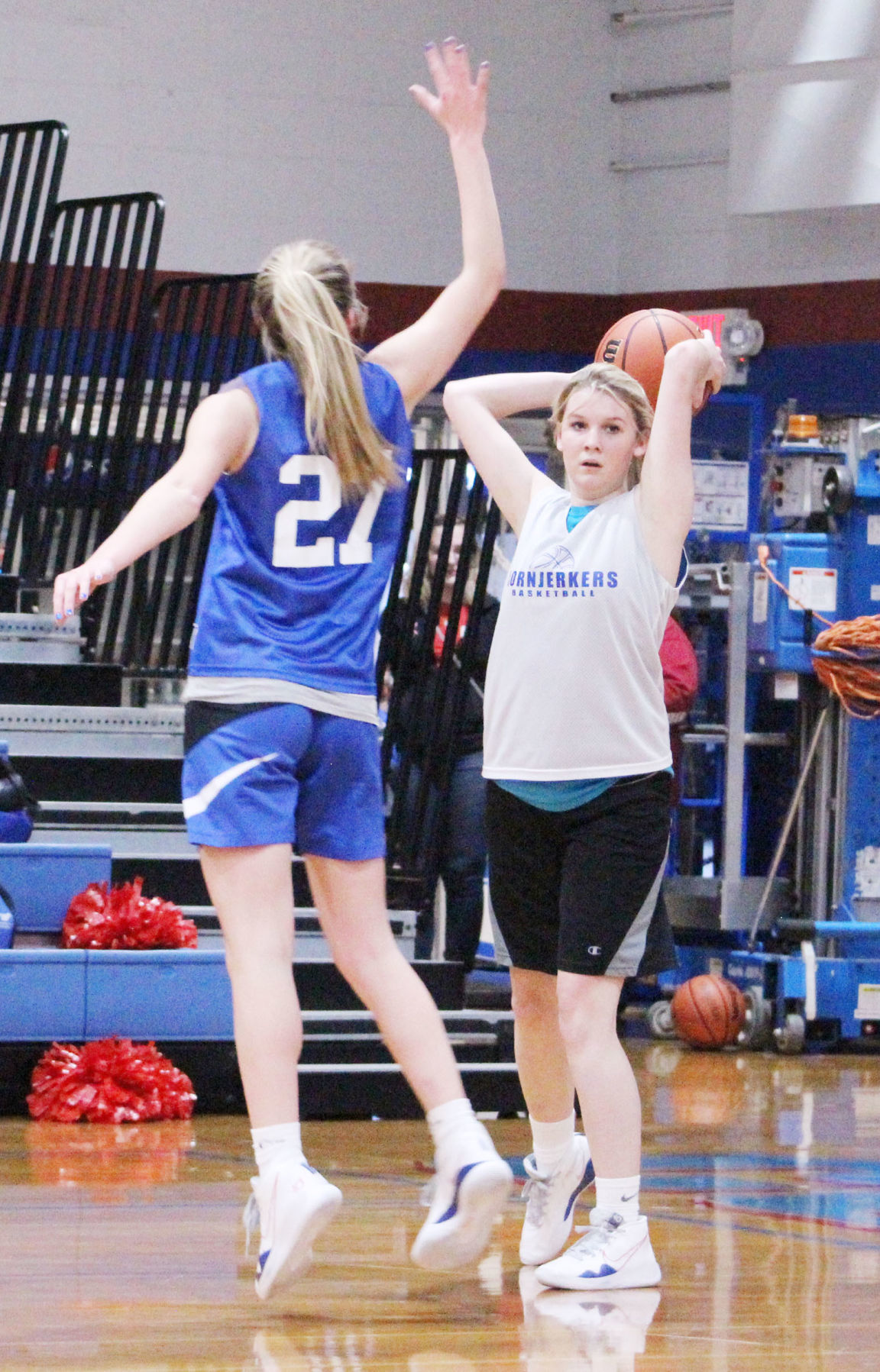 Sadie Drayer, the Lady Cornjerkers’ only senior this season, makes a pass during Saturday’s Meet the Cornjerkers preview night.

Sadie Drayer, the Lady Cornjerkers’ only senior this season, makes a pass during Saturday’s Meet the Cornjerkers preview night.

The boys and girls basketball team presented a scrimmage and the cheer squad performed their routine. The wrestling and bowling teams were introduced during the evening.

Girls Basketball Head Coach Aaron Fell is looking forward to the season, which starts this weekend with the Comet Classic in Oakwood, and believes his team has a lot of potential.

Fell said the players have shown improvement in practices and are learning his system, which includes a new offense and defense system.

He said the team has a lot of experience players, though there is only one senior player this year.

“All of our juniors have played varsity since they were freshmen,” he said.

Fell said he expects a 15-20 season, though he said it will take a lot of work to achieve.

He said their schedule starts off pretty tough, facing some difficult opponents in the opening rounds of the Comet Classic.

“I think we have a lot of potential this season. We have a good mix of athletes who are all dedicated and ready to put in the time and effort to make this season successful.” Sadie Drayer, the team’s only senior player, said.

Coaching for the boys basketball team is Jerud Vandyke

Vandyke said his players have been working hard to prepare for the season.

“They’ve worked real hard and done everything I’ve asked them to do so far,” he said.

Vandyke said he thinks the Cornjerkers have a more difficult schedule this season than last year as they’ve added a new tournament in Paris.

He said he hopes they can be more successful than last year, but said that will depend on how they improve.

Vandyke said anytime a team changes coaches it takes a while for the players to learn the new philosophy and that’s what they’re working on now.

He said practices have been very competitive and players know they have to bring their best if they want to have a chance to compete at the varsity level this year.

Vandyke is excited to get the season going and see what his team can do.

“I’m just excited for it and I know they are too,” he said. “We have a lot of kids coming back, two or three of them are All Conference, so they have that going for them.”

The Cornjerkers will play their first game at Nov. 25 at the Paris Tournament.

Jordan McFadden is the Cheerleading coach this year and this will be the cheerleaders first year doing competition cheer.

“I’m excited and the girls are excited,” she said. “It’s definitely a big change. It’s going to be a learning year for sure.”

Previously the cheerleaders only competed at events like the Vermilion County Tournament. Now they will be competing at IHSA-regulated events, which means the cheerleaders will have to follow specific IHSA rules for competition and will be judged by IHSA-certified judges.

“It allows us to do multiple competitions through the year rather than just the one,” McFadden said.

The team also has its first male cheerleader, Wyatt Johnson, since 2013 this season.

Kiara Colunga and Brooke Lemon are the cheer captains this year.

“I think we are all excited for this week’s upcoming tournament in Paris, I personally am very eager to get back to cheering for our basketball boys. It’s my senior year and I’m excited to see what this season has in store and we as a team will be bringing lots of new things to the table. We have all been putting in many hours of practice for this year and overall you guys can expect some great things from us. Our first game is this coming Nov. 25 in Paris at 5:15 p.m., we all hope to see you there to cheer on our boys.” Lemon said.

“I am super excited for this whole year! Us cheerleaders have been working harder than ever preparing for county and competing this year. we’re also super excited for our boys! our first game is this week at the Paris tournament and I can’t wait to see how the boys do. I know all of us cheerleaders have been working hard and so have the boys, were all so eager to compete and see results for our senior year!” Colunga said.

Sunshine early followed by cloudy skies this afternoon. High around 35F. Winds S at 10 to 20 mph.

Snow showers. Some mixed winter precipitation possible. High 34F. Winds SSE at 10 to 15 mph. Chance of snow 60%. About one inch of snow expected.