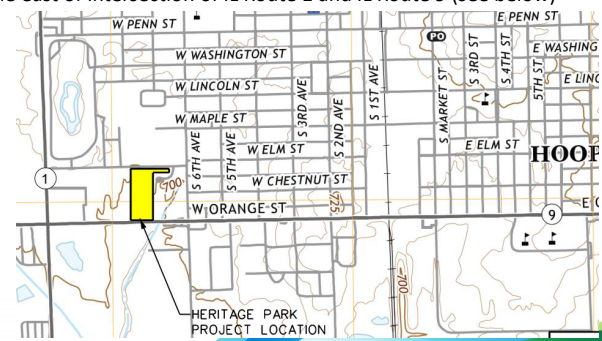 A look at the location for the planned Heritage Way development project in Hoopeston.

A look at the location for the planned Heritage Way development project in Hoopeston.

A special meeting was presented Friday at Hoopeston City Hall to discuss an application to seek grant money to provide infrastructure improvements and eventually allow for the development of a hotel and other potential businesses within the city.

The public meeting centered on a discussion regarding the city’s application for grant funds through the Illinois Department of Commerce and Economic Opportunity Rebuild Illinois Public Infrastructure Grant Program.

He said the city had contracted the services of the Champaign County Regional Planning Commission to help prepare the grant application.

Crusinberry provided a brief history of what has led the city to apply for this grant.

Crusinberry said local leaders have been looking to bring in a new motel to the city ever since the city’s last operating hotel was demolished 17 or 18 years ago to allow for additional economic development.

“From that point forward, city and economic leaders have been exploring all opportunities to develop a new motel in the city,” he said. “In about the last five years, a group of investors have been formed who are prepared to build a hotel in the city.”

Crusinberry said a major obstacle for this project has been the cost of installing an infrastructure that would allow the investors to development the land for the project.

Crusinberry estimated the cost of installing this infrastructure at roughly $1 million.

He said the land for the project, located on Route 9 between Marathon and the former Chrysler dealership, is completely undeveloped and no residents or business will be displaced by the proposed project.

Crusinberry said the project the grant will fund would involve building a new street that would connect Illinois Route 9 with West Elm Street as well as installing a new water main, a sanitary sewer, a storm sewer and retention area.

He said this project, as well as work related to the proposed new truck stop at the intersection of Routes 1 and 9, are the top projects for the city at this time. The next projects on the city’s priority list, Crusinberry said, are aimed at addressing a few blocks of water main that are more than 100 years old.

Crusinberry said obtaining grant funds will be crucial to the Heritage Way project.

“For the city to move forward with this development of totally undeveloped parcels, it is crucial for the city to be awarded this grant to supplement the $150,000 that the city has previously approved in its annual budget,” he said.

Crusinberry also commented on the current tax revenue generated by the land.

He said it currently only contributes $1,057 in real estate taxes.

“The building of the motel should increase that to a conservative estimate of $40,000 per year and more from potential outlying businesses,” Crusinberry said. “Other potential revenue could be generated through the motel tax and sales tax if other businesses are developed on this site.”

He said the development, dubbed the Heritage Park development, plans for the construction of a new hotel and, conceptually, a restaurant and some additional spaces for future commercial developments.

Cowan said private developers are in place, but have been in a holding process waiting for public infrastructure funds and support to assist with the project.

He said the new roadway the project calls for would be called Heritage Way.

He said they’re planning on making grant awards anywhere from $250,000 to $5 million through the grant program.

Cowan estimated infrastructure costs for the Heritage Park development project would be $1,240,000.

Cowan said the private development costs, which would be covered by private investors, associated with the project are estimated to be anywhere from $5 million and up with the hotel alone being estimated at $4.3 million for the initial construction and operation costs.

Cowan said the design has been completed for the public infrastructure improvement work for the project.

Cowan said the city should know by the end of August if it will be receiving grant funds through the Rebuild Illinois program.

If it receives the grant, Cowan said the city would seek bids for the project and open bids in September and plan on starting construction by November. Cowan said they would anticipate completion of the infrastructure project by November 2021.

Cowan outlined some of the benefits of developing the land for a hotel.

He said the hotel would provide accommodation for visitors to the city, encourage investments in other community businesses, provide additional tax revenue for the city and the public infrastructure portion of the project is slated to create up to 69 construction jobs and possibly up to 50 permanent jobs at commercial developments in the future.

After his presentation, Cowan was asked what Hoopeston’s chances of obtaining the grant were considering the competitive nature of the grant program and the limited funds it has available.

Cowan said there were no guarantees and that the program will have its own scoring criteria when choosing projects to fund, but he believes the project has good chance of being selected.

He said their internal scoring of the project put it at 80 points of 100 in terms of meeting criteria that may be considered when choosing projects for grant money. However, he cautioned, obtaining the grant will be dependent on how many other projects are submitted for grant money.

“I think you have a great chance because you’re at that level already, it’s just going to be a matter of how many other hundreds of projects are applying for this and I don’t know that number,” he said.

While he couldn’t pin a percentage chance on whether or not the city would be chosen for grant funding, Cowan said he feels the project is worth pursuing.

“I think this is worth the investment to apply for this,” he said.

“This is really competitive funding,” she said, speaking at the meeting via Zoom. “I do think it’s a great project, we all do, and Hoopeston has been really great to work with while putting this plan together, but there is a limited pool of money and a lot people will be apply for the funds and, particularly given the climate right now with COVID depleting lots of sources of funding, there will be a lot of agencies applying for this money. So it really does depend on the larger pool of applications and the limited amount of funding, but we are optimistic. We think it’s a great project.”

Crusinberry said the city has met the criteria laid out by the grant program and the project is basically shovel-ready because much of the preliminary engineering work was paid for by the Hoopeston Retirement Village Foundation.

Crusinberry added that he had taken part in a webinar presented by the IDCEO about the grant program and was told the grants are awarded based on how well-prepared the applicants are and Hoopeston is ready to go with this project.

To learn more about the project, visit www.cityofhoopeston.com.