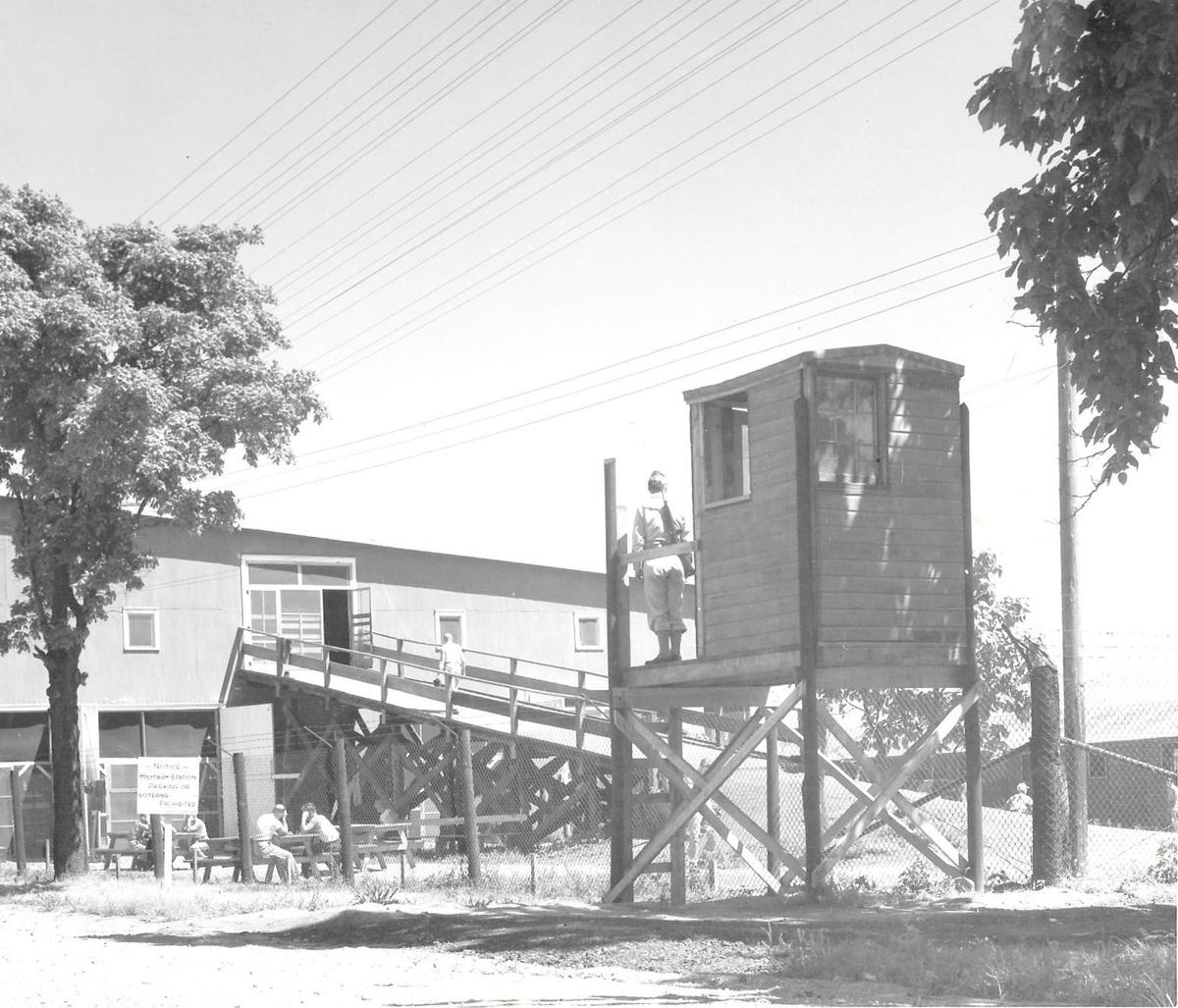 The main barracks building in the Hoopeston German prisoner of war camp in Hoopeston in August 1944. 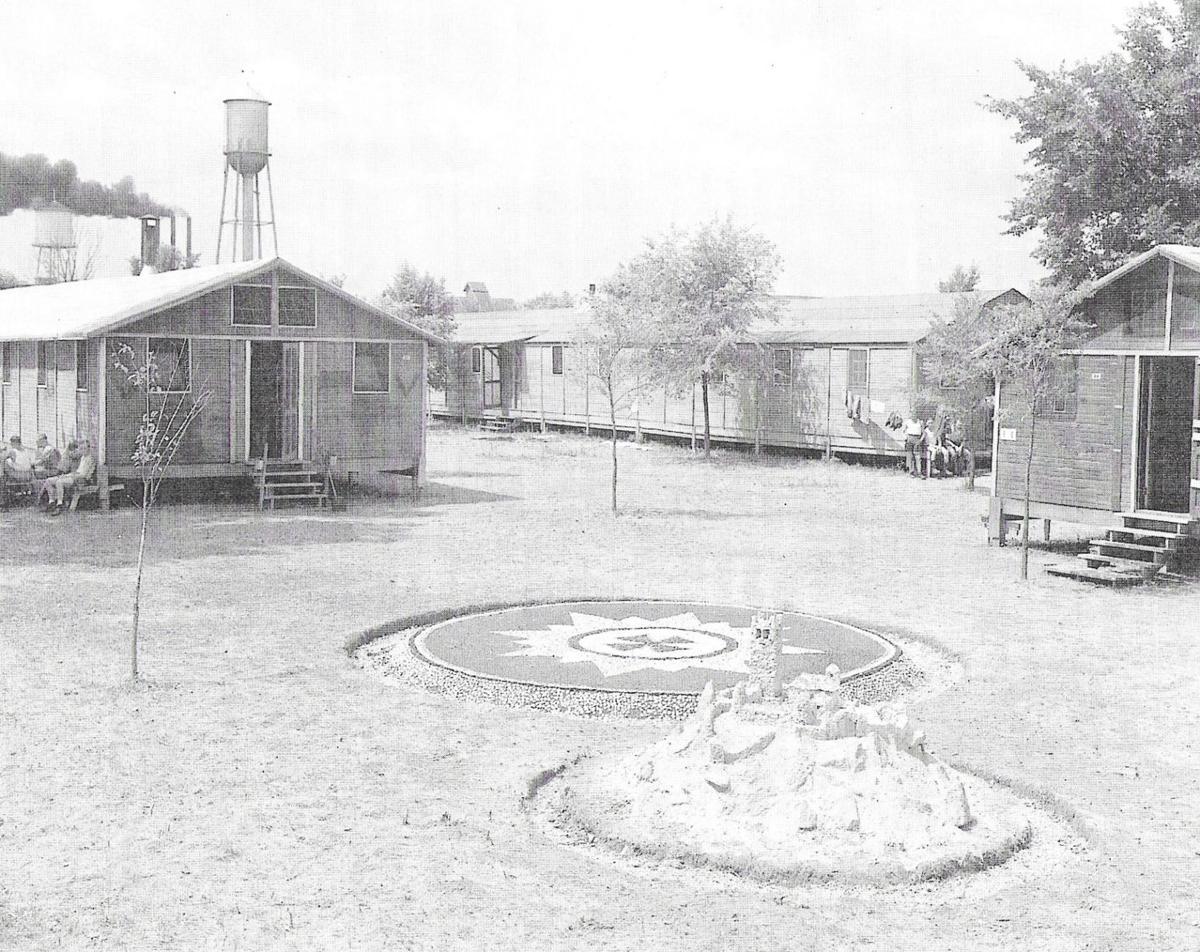 The main barracks building in the Hoopeston German prisoner of war camp in Hoopeston in August 1944.

“The advance Detail of German war prisoners with their guards arrived this afternoon to prepare quarters in the buildings of the Illinois Canning Co., on West Orange Street.

Several hundred prisoners are expected to be here early in May to be worked in the fields and plants of canneries at Hoopeston, Rossville, Milford, and Gibson City. The services of the prisoners for the canning operations were secured through the War Manpower Commission. They are under the jurisdiction of District No. 3 of the Sixth Service Command with Headquarters in Chicago. Colonel C. J. Otjen is the Commanding Officer.

The German prisoners are coming here from the war prisoner camp at Camp Ellis, Illinois, 55 miles southwest of Peoria.

The sending of prisoners to this area is in recognition of the acute labor shortage expected to develop in the canning of food. According to the rules under which prisoners may work, all available civilian labor must first be employed before the prisoners can be out to work.”

The first seventy-five men to arrive in Hoopeston to prepare the facility for the coming German prisoners of war included Rudi Scholz, a young 19-year old soldier captured in Italy.

“I remember getting off the back of the truck inside the compound with my comrades and looking around the area,” Scholz said. “There was only two barracks for us at this time, a three story building which served as the mess hall and personnel headquarters and a barracks for the guards. A fence entirely circled our home-away-from-home, running from Second Avenue on the west to the highway (Route 1/Orange St.), west to the railroad tracks (C&EI) and from the railroad tracks west to Second Avenue to completely enclose us. Along the top of the fence ran barbed wire strung about four feet high. The latrine was in back of our barracks halfway between the fence and the barracks.”

When the prisoners first arrived, they were housed in the two-story red barn that stood at the back and west side of the Illinois Canning Company farm area, closest to Second Avenue. Later, barracks were brought in to house the men. Many of these barracks were Civilian Conservation Corps Camp barracks used by men during the Great Depression years 1933-1942 for President Franklin D. Roosevelt’s conservation and economic programs.

“Later there were guard towers on each of the four corners of the fenced in area to keep an eye on us,” Scholz said. “These towers were built by us during the first week we were in the compound.”

There was no water to the P.O.W. camp when the first contingent of men arrived. Local residents were hired to wash garments for the camp during this period. Pearl Johnson, my grandmother, was one of the women who did laundry for the camp until water was finally run to the camp May 8, 1944.

Once water was at the camp, the prisoners became more self-sufficient, running their own laundry, tailor shop and a small general store for the prisoners.

Glenna Powers (now deceased), who lived at 519 First Avenue, remembered the soldiers being marched each morning and evening down First Avenue to the canning company by guards. Although part of the requirements to allow P.O.W.s in Hoopeston was not to take photographs of the men, Glenna and many other residents did.

Ross H. Egnew (now deceased), owner of the Chevrolet car dealership in Hoopeston in 1944, remembered an officer coming to his house when three P.O.W.s escaped June 6, 1944, telling them to lock all car doors to prevent the escapees from stealing their cars. His letter stated “they placed guards around our house all night.”

Although a non-fraternizing rule was also part of the War Manpower Commission rules, people being people, communicated with the prisoners in many different ways.

Larry Coon, a young boy when the P.O.W.s were here in 1944, said he used to go to the camp two or three times a week to play cards with them at the mess hall or run down to Meadow Gold Dairy on Second Avenue to get them ice cream.

He did add, “If Mom knew I went down there, she’d have blistered my bottom.”

Several men were not so lucky, however, in their contact with the P.O.W.s. Three soldiers were court-martialed for “obtaining intoxicating beverages for (a POW) and permitting him to associate with civilians at a dance in Newman’s Tavern in Watseka.”

By the end of 1944, 549 prisoners of war were in the Hoopeston area being used by canning factories, farms to help with harvest for tomatoes, asparagus and corn, and Chanute Air Base at Rantoul. The prisoners returned again to Hoopeston in 1945 for harvest season.

Nevada, North Dakota and Vermont were the only states of the 48 states during World War II that did not have prison camps. No Japanese soldiers were ever housed in Illinois.

Some clouds in the morning will give way to mainly sunny skies for the afternoon. High near 25F. Winds N at 10 to 15 mph.