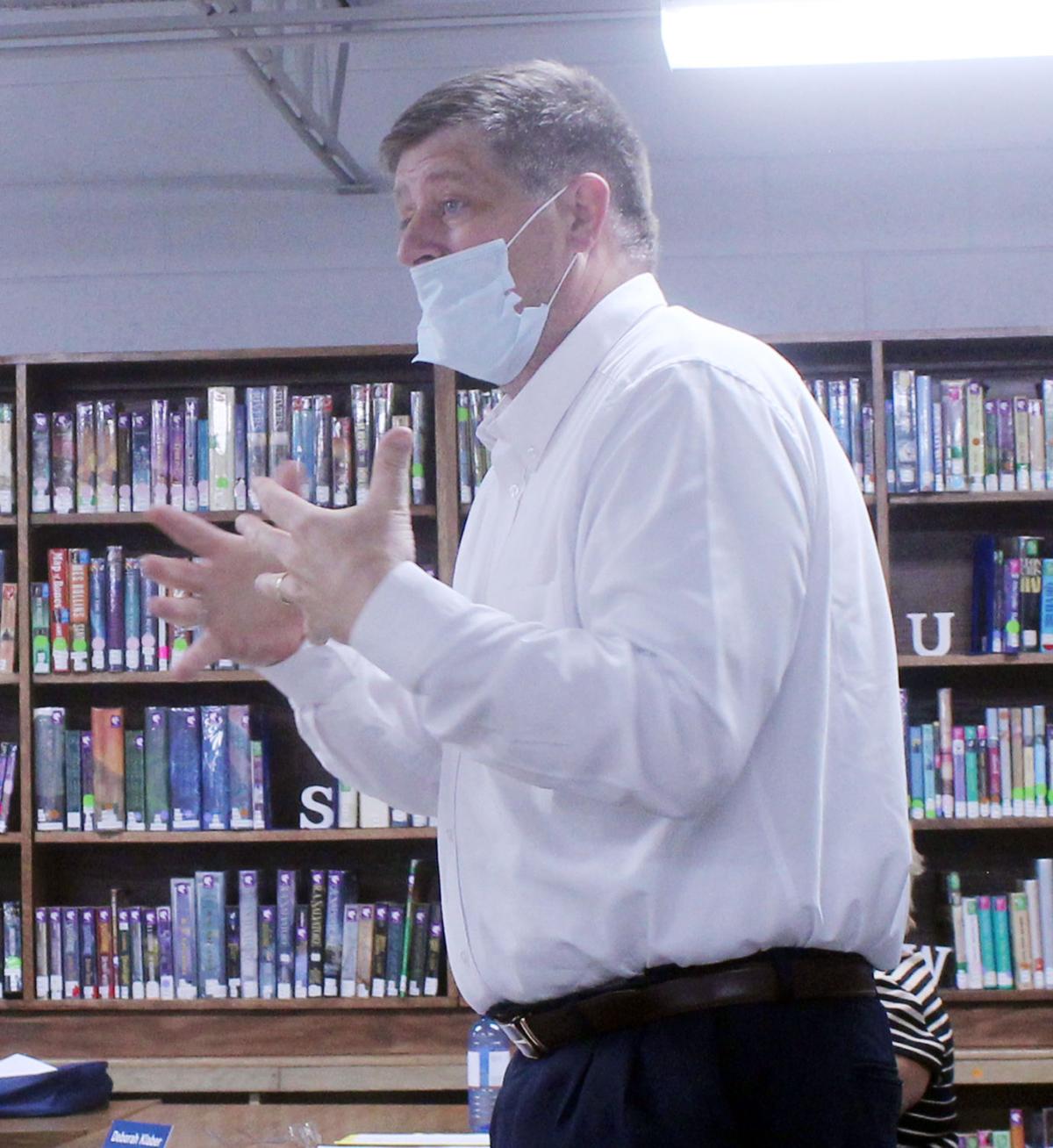 Members of the Hoopeston Area Board of Education listen as members of the district’s learning committee discuss a proposed school re-opening plan during last week’s special board meeting. Pictured from left to right are: Board Member Lisa Leigh, Board President Dave McFadden, Board Members Rich Eisenmann and Craig Lee.

Members of the Hoopeston Area Board of Education listen as members of the district’s learning committee discuss a proposed school re-opening plan during last week’s special board meeting. Pictured from left to right are: Board Member Lisa Leigh, Board President Dave McFadden, Board Members Rich Eisenmann and Craig Lee.

The Hoopeston Area Board of Education met in an extended special session last week to discuss plans for re-opening the school district for the coming school year.

During the meeting, district administrators presented the plan, developed by the district learning committee, which would call for students in grades 6-12 to be divided into two groups with Group A attending school on Mondays and Thursdays and Group B attending school on Tuesdays and Fridays. Wednesdays would be set aside for remote learning.

All students would be class for five hours each attendance day and would be released at 1:05 p.m.

While the board praised the committee for their work and valued the input provided during last week’s meeting, they weren’t satisfied that all options had been considered.

Some in attendance raised the point that other school districts in the county had re-opening plans where students will be in school each day of the week and asked why Hoopeston Area couldn’t do the same.

Board President Dave McFadden asked if anyone from the committee had contacted these other school districts to learn about their plans and see if those plans could work at Hoopeston Area.

While a few of the administrators had been in contact with their colleagues around the county, none had had the chance to thoroughly examine other district plans.

McFadden said the district needed to be able to show the community that it had exhausted all other options before making a decision on a re-opening plan and asked the committee to reach out to other school districts and present the board with an updated plan at another special meeting set for July 28 at 6:30 p.m. in the high school library.

Hoopeston Education Association President Dylan Swank said that teachers want to be back in school and teaching their students in-person.

“100 percent of staff want to be back in the building with kids, that’s everybody’s preference, but that’s not the reality that we’re looking at right now,” he said.

Swank said the Illinois Department of Public Health and Illinois State Board of Education guidelines that were used by the committee to develop its re-opening plan, exist to keep people safe.

After a draft of the district’s proposed re-opening plan went out to staff, Swank set out a follow-up email to staff asking for their thoughts and questions.

“Someone emailed me back and said ‘I have one questions: how would my students behave at my funeral?’” Swank said. “And the fact that I’ve had four or five teachers email me in the last three days saying ‘Does IEA have a resource for writing wills?’ I feel uncomfortable having a conversation about sending staff back to school period, but if there’s a group of people that should be responsible for creating a plan that sends people back to school in a way that’s safe and responsible for students and staff and the community, it’s the group that Mr. Richardson put together and that’s the plan that we put together.”

There was also discussion over concerns related to remote learning with many pointing out that there were many students who didn’t participate in remote learning work during the spring because they knew their grades wouldn’t be affected while other were hampered by technical issues.

District Curriculum Director Emily Brown said the district plans to offer instruction to students and parents about how to utilize Chromebooks and the tools that will be used for remote learning this year.

Visit www.thehoopestonchronicle.com to see the results of Tuesday’s meeting.